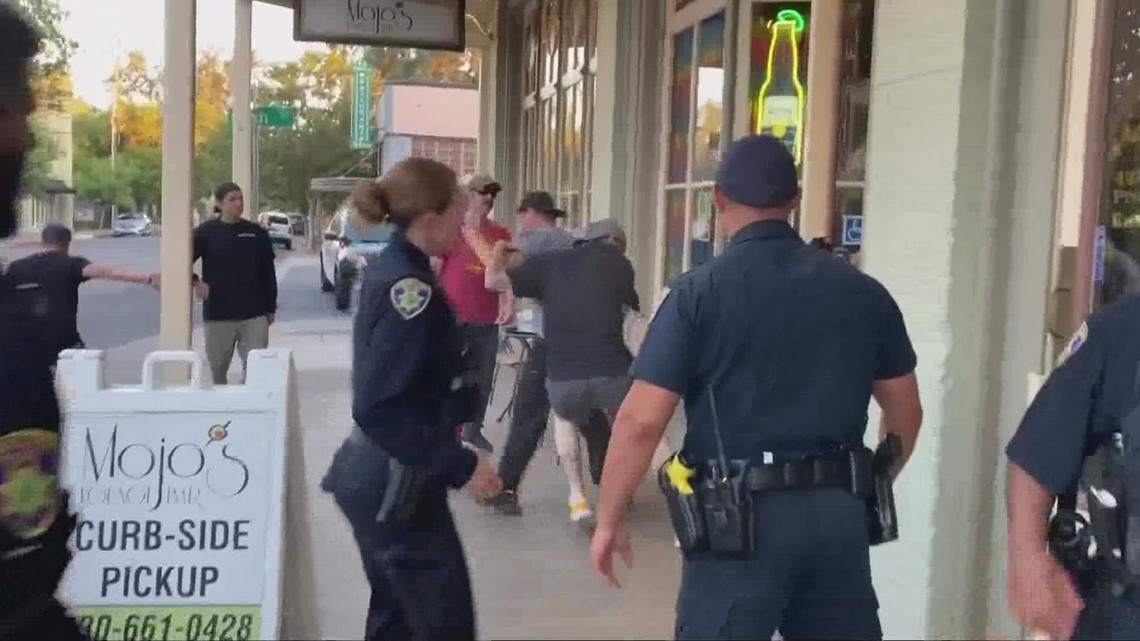 After anti-LGBTQIA+ protesters disrupted a Pride event in Woodland Thursday, some questioned why police officers didn’t do more to intervene.

Woodland was poised to have its first ever drag happy hour, event organizers said, at Mojo’s Lounge and Bar on June 30, to mark the last day of LGBTQIA+ Pride Month. However, organizers announced on Facebook just hours before the event that they’d decided to cancel the show and hopefully reschedule it for later in the summer, due to threats they’d received in recent days.

Despite that, members of the local LGBTQIA+ community and allies showed up to Mojo’s Thursday evening to mark the day and still get together. Woodland Police officers were gathered outside the event, to keep watch against threats.

As the evening went on, a group of people shouting anti-LGBTQIA+ slurs gathered across the street from Mojo’s, causing tension to rise. Several of those protesters eventually crossed the street and approached Mojo’s.

Alleged Proud Boys members attempt to get into The Mojo in Woodland, CA and are met with pepper spray. The bar had planned an all ages Drag Show tonight, which was postponed due to security concerns pic.twitter.com/7Boln64uJ6

New body camera video from Woodland Police shows officers telling Mojo’s customers to close the door, but by then– several protesters were already in the way.

Woodland Police Chief Derrek Kaff explained in the video statement the department published to Facebook Friday afternoon, “You can see that there is a physical confrontation between the bosses and the protesters before someone from inside the lounge deploys pepper spray and then closes the door. Several officers were hit with the pepper spray, and that’s why they had to back up and recover.”

Chief Kaff’s video statement came after hundreds of commenters on social media asked why officers did not do more to stop protesters or arrest them.

“Many of you have asked why no arrests were made,” he said. “As we speak, Woodland PD is reviewing surveillance videos, following up on leads and working with the FBI to identify who made each of the online threats as well as determine whether those threats constitute a hate crime, and if we can make an arrest— we absolutely will.”

He said his department is looking for photos, videos and witnesses of what happened outside Mojo’s Thursday night so they can continue piecing together their investigation.

“The Woodland Police Department supports our LGBTQIA+ community,” Kaff said. “We will not tolerate hate or discrimination.”

But how did protesters even know about this event?

A Washington Post article earlier this year dove into a Twitter account called Libs of TikTok, which “reposts a steady stream of TikTok videos and social media posts, primarily from LGBTQ+ people, often including incendiary framing designed to generate outrage,” according to the article .

On June 8, the account posted a screenshot of the Woodland event, saying, “An LGBT youth group is holding a drag show happy hour for all ages at a bar in Woodland, CA. They encourage kids to bring money to tip the drag queens.”

Alexis Sanchez, Director of Advocacy and Training with the Sacramento LGBT Community Center, said social media accounts and groups are fueling this recent outpouring of hate.

“We’ve started to see, you know, that rhetoric escalate into actual violence,” she said. “People who share similar negative biases and similar hate towards marginalized groups and have served to kind of embolden each other.”

Israel Cudmore, whose stage name as a drag performer is Rose Rowzay, was supposed to perform at Thursday’s show, before it got canceled. He said he’s disappointed that anyone would protest his chosen art form.

“We don’t have this big agenda. We don’t have meetings that we hold to take over the world,” he said with a laugh. “[People who send threats] don’t understand what drag is and understand the silliness of it or how we’re just here to have fun. They think it’s this whole– they see someone dressing up as a girl or they see, you know, I mean, this big hair, big eyeliner, big makeup, and they just they don’t know what it is. So their immediate, first thing to do is to reject it. And so it’s just– it’s been something that now it’s becoming more political than it needs to be, in my opinion. And I understand drag has always been political, but at the same time, right now…It doesn’t call for this whole riot, this whole protest, this whole– that’s not what we’re here for. And recent events, it’s just been ridiculous.”

Across the nation in recent months, anti-LGBTQIA+ protesters have disturbed Pride and other types of events.