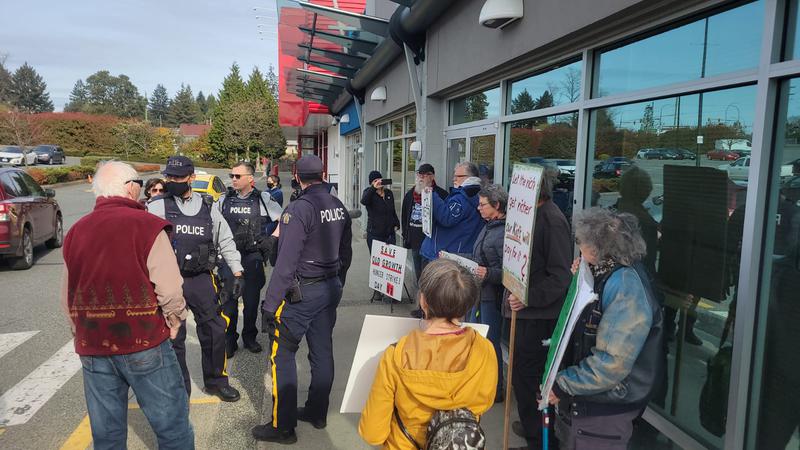 Demonstrators were on stage around 9 am, preparing at the back of the Brooks Landing parking lot near the end of Highland Blvd.

Two members of the group then chained the doors of the branch closed at 9:30 am and glued their hands to the metal door handles. Some staff were already inside, then closed and locked interior doors.

Several bank patrons attempted to enter the branch but were turned away with protesters pleading their cause.

Nanaimo RCMP officers arrived on scene around 9:50 am.

Amid the disruption, the bank opened a half hour late at about 10 am with police escorting customers inside. Demonstrators remained superglued outside the front entrance.

Two people were arrested by officers.

The move comes after a renewal of highway disruptions in Nanaimo on Monday, April 4 where protesters first blocked Hwy. 1 at Milton St., before being dispursed by Nanaimo RCMP.

A second demonstration was held, briefly, a couple of hours later at the Comox Rd. and Terminal Ave. intersection.

It was the first highway disruptions from the group in Nanaimo since a month-long campaign ended in early February.

The group’s primary demands are related to the protection of old-growth forests and what they claim is government inaction on protecting remaining trees from logging.

Further demonstrations at points along Hwy. 1 in Nanaimo are expected Friday, April 8.

According to the group, two members are participating in a hunger strike in a bid to lure BC forests minister Katrine Conroy to the negotiation table.

Join the conversation. Submit your letter to NanaimoNewsNOW and be included on The Water Coolerour letters to the editor feature.