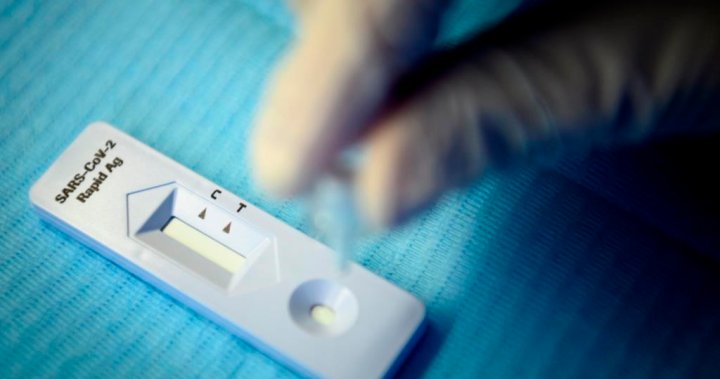 As Canada heads towards a sixth wave of COVID-19 with rising cases and hospitalizations across the country, experts say people can still test negative on a rapid test in the first few days they have symptoms.

This is partly due to how quickly vaccination clears the amount of the virus in an infected person’s body.

“If the antigen test is dependent on the amount of virus in your upper respiratory tract, you will still be infectious … in the first few days,” said Dr. Earl Rubin, an infectious disease specialist and a division director of pediatric infectious diseases at the Montreal Children’s Hospital.

“But you may clear the virus more rapidly if you have good antibody from the vaccine … and therefore the antigen test may become negative quicker in those who are vaccinated rather than the unvaccinated,” he added.

“Antigen tests are available and (they’re) fast … You don’t have to leave your house, you can do it yourself. So there are a lot of advantages, but I think people have to really understand the limitations of the tests,” he said.

Rubin adds there’s a debate among health experts on whether antigen tests may not be as sensitive to the newer variants of COVID-19, like Omicron.

“It’s hard to compare in real time … because antigen tests weren’t as readily available or used as much as they are now, but they certainly do work,” he said.

In February 2022, the Ontario COVID-19 Science Advisory Table published findings from an analysis of preprint studies suggesting that the pooled sensitivity of rapid antigen tests for detecting Omicron infections is about 37 per cent, compared to 81 per cent for the Delta variant.

Health Canada says on its website that it has “no evidence” that variants affect the ability of agency-approved tests to confirm COVID-19 cases, but notes that these new devices are still being investigated.

“All tests have an ability to show a false positive and a false negative,” said Tim Sly, an epidemiologist and professor emeritus in the School of Public Health at Ryerson University.

“There’s a period of around two days before the rapid test begins to pick up the antigen … because remember, it’s looking for the protein and there’s got to be enough of the protein there,” he added.

Sly says that by the third day, a rapid test would be able to pick up the antigen that’s replicating in the body.

“This is one reason why it’s always good to give a second rapid test, a day or two afterward, just to make sure it’s really negative.”

However, the “real problem” from an epidemiological point of view, said Sly, is that between 40 to 70 per cent of people who carry COVID-19 do not have any symptoms at all.

“You don’t actually know who’s virus-positive walking around. It could be the person sitting next to you on the bus. They may be shedding the virus every time they open their mouths … and you don’t know it,” Sly said.

“So this has caused a tremendous amount of a problem. And yes, some of those people will go on to develop the illness a bit later on, and some never do. This is one of the many aspects of this virus that’s been a real problem, a real headache,” he added.

This means people who are carriers of the virus may not be getting tested at all because they don’t have any symptoms and don’t think they have COVID-19; if they do happen to get tested, it’s often negative.

Sly says these people should continue to do multiple tests to make sure they’re COVID-free.

To date, the government of Canada said on its website that testing has related on molecular testing (PCR) collected by a health-care professional and that it remains the gold standard for testing.

A rapid test, however, is “as good as a coin toss,” according to Rubin, especially on the first day of testing.

“If a rapid antigen test is positive, it’s reliable. If it’s not positive and you have symptoms compatible with COVID, you should be managing yourself and the people around you as if you are COVID-positive,” said Rubin.

– with files from The Canadian Press