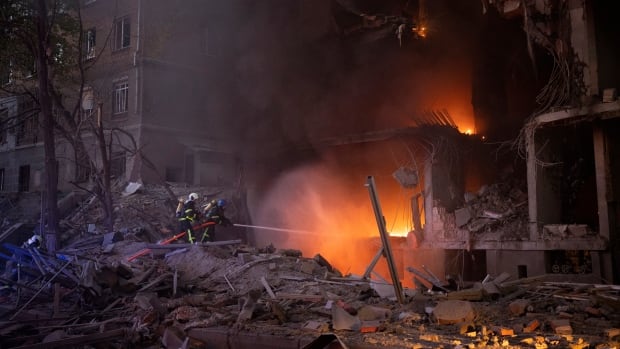 Ukraine’s leader accused Russia of trying to humiliate the United Nations by raining missiles on Kyiv during a visit by Secretary-General Antonio Guterres, an attack that shattered the capital’s attempt to return to normality as the focus of the war moved east.

President Volodymyr Zelensky said Ukraine’s forces were holding off Russia’s attempted advance in the south and east, as efforts continued to secure safe passage for residents trapped in Mariupol, which has been largely reduced to rubble in a two-month-long siege. An official in the president’s office did not rule out an evacuation as soon as Friday.

Russia pounded targets all over Ukraine on Thursday, including the attack on Kyiv that struck a residential high-rise and another building. US-funded broadcaster Radio Free Europe/Radio Liberty said its journalist Vira Hyrych, who lived in one of the buildings hit, died. Her body was found in the rubble on Friday.

Ten people were wounded in the attack, including at least one who lost a leg, according to Ukraine’s emergency services.

In an apparent reference to the same strike, Russia’s Defense Ministry said Friday that it had destroyed “production buildings” at the Artem defense factory in Kyiv.

The attack on Kyiv came barely an hour after Zelensky held a news conference with Guterres, who toured some of the destruction in and around Kyiv and condemned attacks on civilians during his visit.

“This says a lot about Russia’s true attitude towards global institutions, about attempts of Russian authorities to humiliate the UN and everything that the organization represents,” Zelensky said in an overnight video address to the nation. “Therefore, it requires corresponding powerful reaction.”

The strikes were the boldest Russian bombardment of the capital since Moscow’s forces retreated weeks ago, following their failure to take the city in what they hoped would be a lightning offensive. Instead, stiff Ukrainian resistance, bolstered by Western arms, stalled Putin’s advance and forced his troops to pull back to regroup.

Some have started to push into the country’s eastern industrial heartland of the Donbas, which Moscow now says is its focus. Getting a full picture of the unfolding battle in the east has been difficult, because airstrikes and artillery barrages have made it extremely dangerous for reporters to move around. Both Ukraine and Moscow-backed rebels fighting in the east have also introduced tight restrictions on reporting from the combat zone.

But so far, Russia’s troops and the separatist forces appear to have made only minor gains, and Britain’s Defense Ministry said Friday that those have been achieved at significant cost to Russia’s forces.

One aim of Guterres’s visit was to secure the evacuation of people from the ruined southern port city of Mariupol, including a shattered steelworks where Ukrainian defenders are holed up and hundreds of civilians are also sheltering, Previous evacuation attempts have collapsed.

“I cannot confirm the exact details of the operation to make sure it is done with safety for our people and for civilians stranded in Mariupol,” said Saviano Abreu, a spokesperson for the UN’s humanitarian office.

An official in Zelensky’s office said negotiations were underway with UN mediation, and did not rule out an evacuation of the plant happening Friday. The official spoke on condition of anonymity, because they were not authorized to speak to the media.

Mariupol has seen some of the most dramatic suffering of the war. Under siege since the early days of the invasion, many of its residents became trapped with scarce access to food, water, medicine or electricity.

An estimated 100,000 people are believed to still be in the city, and the city council warned Thursday that a lack of safe drinking water or a working sewer system could lead to outbreaks of deadly diseases such as cholera and dysentery. It added that bodies lay decaying under the rubble.

Russian forces largely control the city, but some 2,000 Ukrainian fighters are holed up at the steel plant, the last known pocket of resistance. About 1,000 civilians are with them, and the fighters said recent concentrated bombings killed and wounded people.

Video posted online by Ukraine’s Azov Regiment inside the steel plant showed people combing through the rubble to remove the dead and help the wounded. The regiment said the Russians hit an improvised underground hospital and its operating room, killing an unspecified number of people. The video couldn’t be independently verified.

Russia’s invasion of its neighbor on Feb. 24 upended the post-Cold War security order. Putin, long irked by NATO’s expansion to eastern Europe, says the operation seeks the “demilitarization” of Ukraine, aims to protect people in the mostly Russian-speaking Donbas and ensure Russia’s own security. One of Moscow’s demands has been that Ukraine drop its bid to join the western NATO alliance. Ukraine and the West say it was an unprovoked and illegal invasion launched to topple the government in Kyiv.