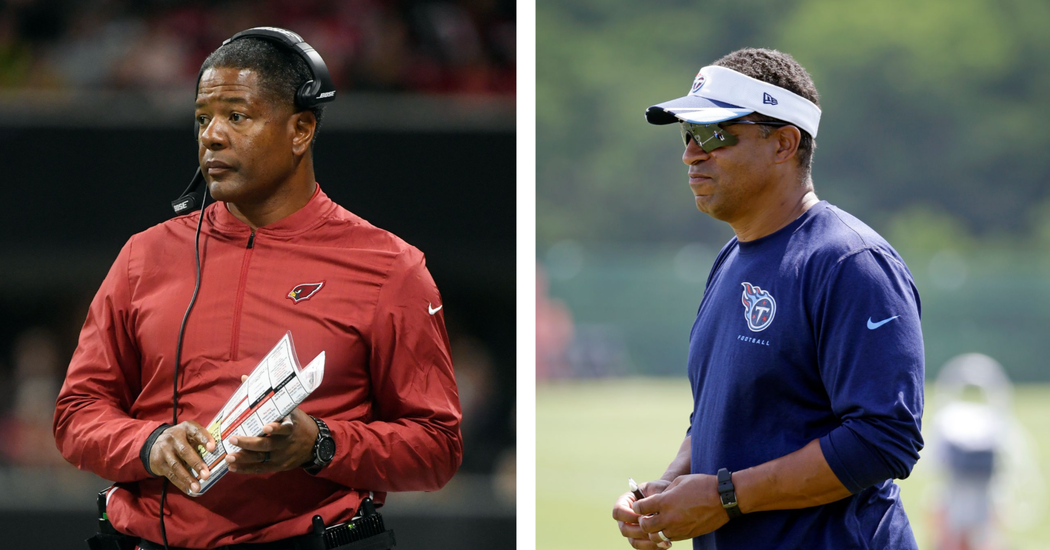 Two Black coaches have joined a lawsuit filed in February by Brian Flores, the former head coach of the Miami Dolphins who accused the NFL and its 32 teams of discriminating against African Americans in their hiring practices.

On Thursday, Steve Wilks, who was fired after one season as head coach of the Arizona Cardinals, and Ray Horton, a longtime assistant coach and defensive coordinator, were added to the Flores complaint. A pretrial conference for the federal lawsuit is scheduled for April 29.

In the amended complaint, Wilks, 52, said that the Cardinals hired him as a “bridge coach” in 2018 and that he was not given any meaningful chance to succeed under a general manager, Steve Keim, who “made poor personnel decisions.”

The Cardinals finished with a 3-13 record that season. Wilks was fired before the team drafted quarterback Kyler Murray with the No. 1 overall pick in 2019. Kliff Kingsbury, who is white and had no NFL coaching experience, was hired to replace Wilks.

After Wilks left Arizona, he was defensive coordinator for the Cleveland Browns in 2019 and then held the same position at the University of Missouri in 2021. In February, he was hired by the Carolina Panthers as a defensive pass game coordinator and secondary coach.

“Like Brian and Ray, I did not make the decision to join this lawsuit based on what it could potentially cost me in my own career,” Wilks said in a statement. “Instead, this decision was made to help pave the way for the next generation of talented minority coaches and executives to finally be given an equal opportunity and level playing field.”

In a statement, the Cardinals called the decisions made after the 2018 season “very difficult,” adding that they “were entirely driven by what was in the best interests of our organization and necessary for team improvement.” The statement continued, “We are confident that the facts reflect that and demonstrate that these allegations are untrue.”

Ahead of the 2016 season, Horton applied for the head coaching job with the Tennessee Titans, where he was the defensive coordinator. Horton, who held assistant coach and coordinator positions with seven franchises in a 24-year career on the sideline, said in the complaint that the team gave him a “sham interview” so he could meet the Rooney Rule, a league requirement that teams consider a diverse slate of candidates for open head coaching positions.

The Titans that year promoted the interim coach Mike Mularkey, who is white, to head coach. In a podcast interview conducted four years later, Mularkey said the Titans owner Amy Adams Strunk and her family told him he would be hired before they interviewed nonwhite applicants.

“I sat there knowing that I was the coach in ’16, as they went through this fake hiring process knowing a lot of the coaches that they were interviewing, knowing how much they prepared to go through those interviews, knowing everything they could do and they have no chance at getting that job,” Mularkey said to “Inside Pro Football Podcast.” He added that it was his biggest regret in his career.

Over three seasons, Mularkey coached the Titans to a 20-21 record. Horton, 61, coached two more seasons: as defensive coordinator for the Cleveland Browns in 2016 and as defensive backs coach with Washington in 2019. Horton is still seeking work in the NFL, but said in the complaint that he was viewed as a “stale ” candidate and that he had not been called to interview for any head coach job openings.

“When I learned from Coach Mularkey’s statements that my head coach interview with the Titans was a sham, I was devastated and humiliated,” Horton said in a statement.

He added: “Although I know that I am taking a risk being associated with this case, it would be a bigger risk to stand on the sideline and give the NFL a pass for the systemic discrimination that has harmed me and so many others.”

The Titans denied the account. “Our 2016 head coach search was a thoughtful and competitive process fully in keeping with NFL guidelines and our own organizational values,” the team said in a statement. “No decision was made, and no decision was communicated, prior to the completion of all interviews.”

The claims by Wilks and Horton echo allegations Flores made in his original complaint. In Thursday’s amendment, Flores elaborated on the fallout since he accused the Denver Broncos and the Giants of interviewing him as a part of bad faith hiring searches. Both teams have denied his allegations.

In his amended complaint, Flores claimed that the Houston Texans removed him from consideration for their head coaching vacancy after he filed his lawsuit and spoke “publicly about systemic discrimination in the NFL” The Texans promoted Lovie Smith, who is Black, from defensive coordinator to head coach in February.

A wave of scrutiny. The most popular sports league in America is facing criticism and legal issues on several fronts, ranging from discrimination to athletes’ injuries. Here’s a look at some of the recent controversies confronting the NFL, its executives and teams:

A demoralizing culture for women. After the 2014 Ray Rice scandal, the NFL stepped up its efforts to hire and promote women. But more than 30 former staff members interviewed by The Times described a stifling corporate culture that has left many women feeling pushed aside. Six attorneys general warned the league to address the problems or it could face an investigation.

Sexual harassment claims. Daniel Snyder, the owner of the Washington Commanders, is the subject of an NFL inquiry after sexual harassment allegations were made against him by former employees. In July, the league fined the franchise $10 million after an investigation into allegations of harassment in the team’s front office.

Flores also claimed that the Dolphins had not paid him for the remaining two years of his five-year contract, which he called an “eight-figure sum.” The team did not respond to a request for comment.

After Flores failed to land another head coaching job this off-season, the Pittsburgh Steelers hired him as a senior defensive assistant and linebackers coach.

The addition of two coaches to Flores’s case does not necessarily make it stronger, legal experts said. All three coaches claim they were denied jobs because the teams were only trying to meet the requirement that candidates of color be interviewed. But the NFL could argue that each situation was unique, and thus should be adjudicated separately.

“There may be hundreds or at least dozens of African American candidates for various coaching jobs, but the reality is, in the absence of a policy by the NFL that discriminates against coaches, it’s hard to argue that these aren’t individualized facts,” said Ted Frank, a director at the Hamilton Lincoln Law Institute and the Center for Class Action Fairness, a nonprofit public interest law firm. “Even if you find a discriminatory email from an owner, that reflects on that owner, not the whole NFL”

Frank said that if the case is not certified as a class action, it could proceed as three distinct claims. The NFL, he added, would most likely try to push each of the cases into arbitration.

The case has shined an unflattering light on the NFL, which has been repeatedly accused of not doing enough to promote diversity in its coaching ranks, where just six of 32 head coaching positions are filled by nonwhite men. It is being fought as the league faces scrutiny from a congressional committee’s inquiry into allegations of workplace harassment at the Washington Commanders. On Wednesday, attorneys general from six states said they would begin an investigation if the NFL did not address charges of workplace harassment at the league’s head office.

Meanwhile, the league has unveiled efforts to ensure diverse candidates are considered for top jobs. At its annual meetings last week, the NFL announced an expansion of the Rooney Rule to stipulate that each team with open head coach and general manager jobs conduct in-person interviews with two external candidates who are people of color or women, or both.

The league also announced the creation of a six-person diversity advisory committee to examine its diversity, equity and inclusion policies. Its members include Rick Smith, the former Houston Texans general manager, and Peter Harvey, the former New Jersey attorney general who advised the league on its 2017 investigation into domestic violence allegations against Dallas Cowboys running back Ezekiel Elliott.