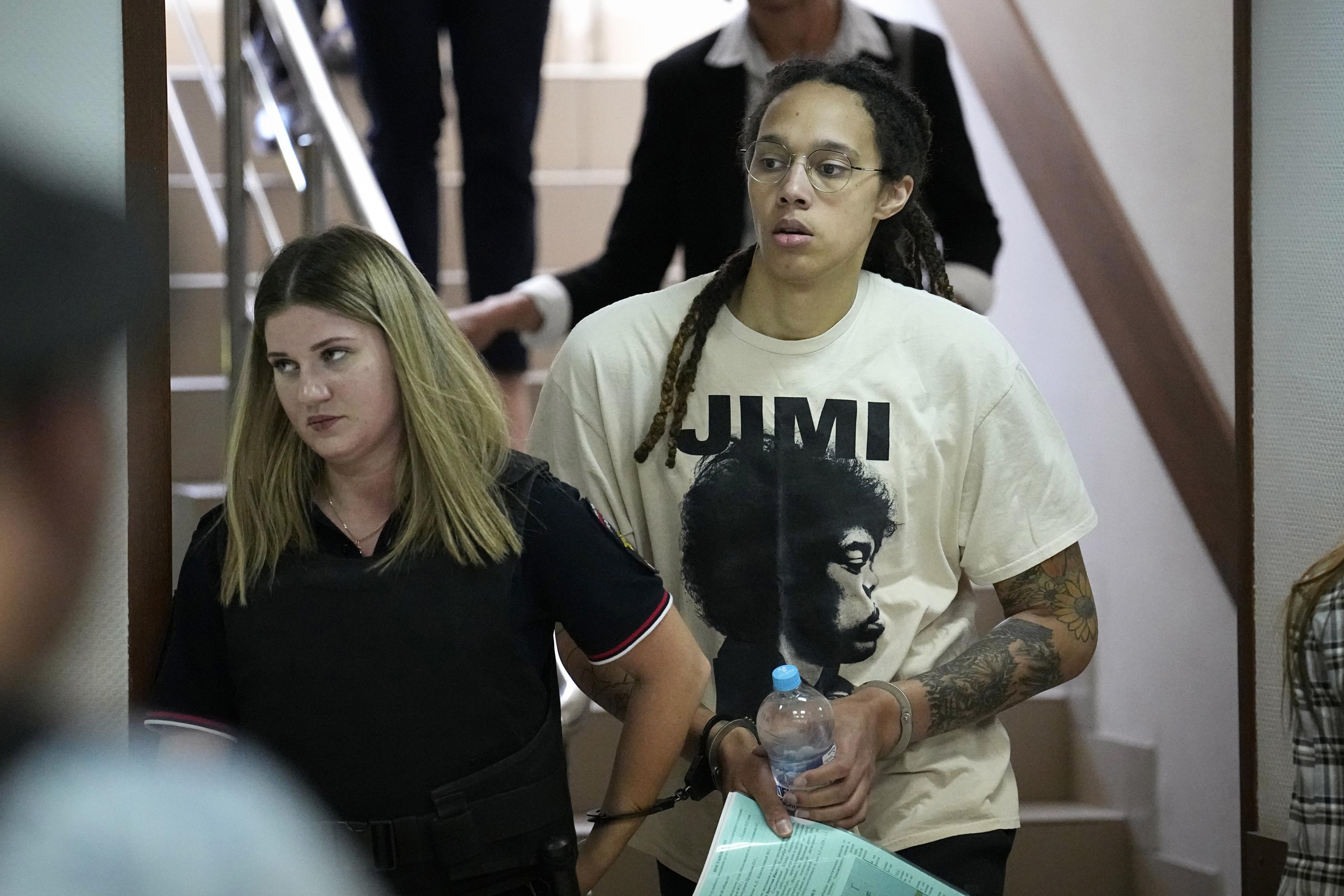 MOSCOW (AP) — American basketball star Brittney Griner went on trial Friday, 4 1/2 months after her arrest on charges of possessing cannabis oil while returning to play for a Russian team, in a case that has unfolded amid tense relations between Moscow and Washington.

The initial session of the trial, which was adjourned until July 7, offered the most extensive public interaction between Griner and reporters since the Phoenix Mercury center and two-time US Olympic gold medalist was arrested in February at Moscow’s Sheremetyevo Airport.

Griner, 31, was escorted into the courtroom in the capital’s suburb of Khimki while handcuffed and wearing a Jimi Hendrix T-shirt. At a closed-door preliminary hearing Monday, her detention was extended for another six months, to Dec. 20.

Police have said she was carrying vape canisters with cannabis oil when detained at the airport. She could face up to 10 years in prison if convicted of large-scale transportation of drugs.

The state-owned Tass news agency quoted Griner as saying in court that she understood the charges but would not comment further on them until later.

Two witnesses were questioned by the prosecution: an airport customs official, who spoke in open court, and an unidentified witness in a closed session. according to the state news agency RIA-Novosti. The trial was then adjourned for a week, it said, when two other witnesses did not show up.

Alexander Boykov, attorney for Griner, told reporters outside court that “I wouldn’t want to talk on the specifics of the case and on the charges and to comment on our position on it because it’s too early for it.”

Boykov also told RIA-Novosti that she has been exercising in the detention area. The Russian website Business FM reported that Griner, who smiled at times, said she wishes she could work out more and that she was struggling because she doesn’t understand Russian.

Fewer than 1% of defendants in Russian criminal cases are acquitted, and unlike in US courts, acquittals can be overturned.

Her case comes at an extraordinarily low point in Moscow-Washington relations. Griner was arrested less than a week before Russia sent troops into Ukraine, which already aggravated high tensions between the two countries. The US then imposed sweeping sanctions on Moscow, and Russia denounced the US for sending weapons to Ukraine.

Elizabeth Rood, US charge d’affaires in Moscow, was in court and said she spoke with Griner, who “is doing as well as can be expected in these difficult circumstances.”

“The Russian Federation has wrongfully detained Brittney Griner,” Rood said. “The practice of wrongful detention is unacceptable wherever it occurs and is a threat to the safety of everyone traveling, working, and living abroad.”

She said the US government, from its highest levels, “is working hard to bring Brittney and all wrongfully detained US nationals home safely.”

“The facts are that the famous athlete was detained in possession of prohibited medication containing narcotic substances,” Peskov told reporters. “In view of what I’ve said, it can’t be politically motivated,” he added.

Griner’s supporters had kept a low profile in hopes of a quiet resolution until May, when the State Department reclassified her as wrongfully detained and shifted oversight of her case to its special presidential envoy for hostage affairs — effectively the US government’s chief negotiator.

“It was good to see her in some of those images, but it’s tough. Every time’s a reminder that their teammate, their friend, is wrongfully imprisoned in another country,” Phoenix Mercury coach Vanessa Nygaard said Monday.

The coach hoped that Biden would “take the steps to ensure she comes home.”

Griner’s supporters have encouraged a prisoner swap like the one in April that brought home Marine veteran Trevor Reed in exchange for a Russian pilot convicted of drug trafficking conspiracy.

Russian news media have repeatedly raised speculation that she could be swapped for Russian arms trader Viktor Bout, nicknamed “the Merchant of Death,” who is serving a 25-year sentence on conviction of conspiracy to kill US citizens and providing aid to a terrorist organization .

Russia has agitated for Bout’s release for years. But the wide discrepancy between Griner’s case — which involves alleged possession of vape cartridges containing cannabis oil — and Bout’s global dealings in deadly weapons could make such a swap unpalatable to the US

Others have suggested that she could be traded in tandem with Paul Whelana former Marine and security director serving a 16-year sentence on an espionage conviction that the United States has repeatedly described as a setup.

US Secretary of State Antony Blinken, when asked Sunday on CNN whether a joint swap of Griner and Whelan for Bout was being considered, sidestepped the question.

“As a general proposition … I have got no higher priority than making sure that Americans who are being illegally detained in one way or another around the world come home,” he said. But he said he could not comment “in any detail on what we’re doing, except to say this is an absolute priority.”