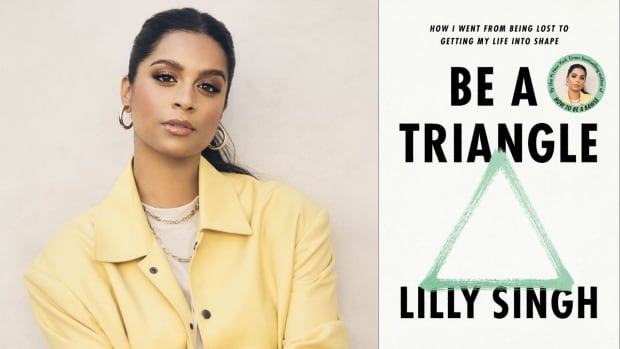 Lilly Singh is an actor, writer and social media creator from Scarborough, Ont. She gained international popularity through her YouTube channel, Superwoman, and went on to executive produce and host NBC’s A Little Late with Lilly Singh for two seasons.

Her debut book, How to Be a Bawse, won a 2017 Goodreads Choice Award. In the book, the Scarborough, Ont. performer shared her secrets to becoming one of YouTube’s biggest stars.

Singh’s newest book, Be a Triangle, explores how to create inner peace in the face of adversity. From Singh’s personal struggles with identity, success and self-doubt, she teaches readers to “unsubscribe” from cookie-cutter ideals. Be a Triangle is an uplifting guide to befriending yourself.

Here are some of the books and authors Singh has loved reading over the years.

“As a kid, I think the earliest things I read were Archie Comics. I would collect them and I would display them in my room, although I couldn’t relate to any of the characters and I thought they were really absurd.

“After a long day, my escape was to dive into this absurd world of these characters that I couldn’t relate to. And I’ll be real, growing up as an Indian kid, I couldn’t comprehend the actions of Veronica or [anyone]. I was like, ‘Why are your parents not yelling at you?’

“It was fascinating for me to dive into this world of seeing these characters act unruly.”

“I think that was the first time I read a story that involved a kid talking about their feelings. She was so descriptive about how she felt about her parents. In the book, her parents get divorced and she talks about that whole process.

I think that was the first time I read a story that involved a kid talking about their feelings.

“And I remember thinking, ‘Oh my God, this is the first time I’ve ever seen value given to a kid’s opinion. She’s processing her emotions in a way I’ve never been introduced to before.’ So that was really special for me.”

“I was obsessed with the Shopaholic Series in highschool. I used to be the classroom leader who had to hold the door open for everyone. And I got in trouble because I would be reading the book while doing those things.

“Sophie and I actually follow each other now and she sends me signed books. I fan-girl a little because I love that series so much.”

“The writing style of [The Four Agreements]how simple and short it is, was a big inspiration for my book, Be a Triangle. When I read The Four Agreements, not only did I feel impacted by just the messages, but I love how it was written. The author didn’t care about repetition, didn’t care if things were redundant, didn’t care if sentences were complex. He just said what needed to be said in the way it needed to be said. And so it felt like a friend was giving you a pep talk.

The ideas in it are so complex and simple at the same time that someone can use the book as a lens through whatever they’re going through in their life.

“The ideas in it are so complex and simple at the same time that someone can use the book as a lens through whatever they’re going through in their life. I think those are the most powerful books because sometimes I read a book where I ‘m like, ‘This doesn’t quite make sense for me and this doesn’t quite work with my life.’ This is a book where I feel like it could work with everybody’s life.

“I really love that style of writing and I reference that book a lot to this day. Anytime I feel myself on the brink of sanity, I go back to The Four Agreements.”

Is Everyone Hanging Out Without Me? (And Other Concerns) by Mindy Kaling

“Is Everyone Hanging Out Without Me? was the first book that made me, as an adult, feel seen.

“And I know exactly where I was when I was reading it. I was on a plane and I was so embarrassed because I kept laughing out loud and the person sitting next to me was like, ‘Are you crazy?’ [Kaling] was so vulnerable. The reason it really struck me is because this is the first time I experienced an adult South Asian woman being vulnerable. She was going into depth about her insecurities in her childhood and I was like, ‘Oh my God, I guess we’re not so different.’

The reason why it really struck me is because this is the first time I experienced an adult South Asian woman being vulnerable.

“I feel super seen and I resonate so much with what she’s talking about and her delivery is so comedic and awesome and honest. I really fell in love with her style of writing and storytelling. So that book really left an impact on me.”

Tell Me How to Be by Neel Patel

“I have a very large chip on my shoulder that I’m very honest about, which is I don’t think South Asian artists are given enough credit. And I often think when we try to tell our stories in Hollywood on screen, we ‘re told they’re not relatable or we’re forced to make them really, really broad and not nuanced at all.

I have since learned that books are actually so much ahead of what we see on screen when it comes to stories.

“I was absolutely blown away by Tell Me How to Be by Neel Patel because, here I am struggling to see South Asian stories on screen, I’m struggling to see South Asian queerness on screen, I’m struggling to see parents that are nuanced because all we see is that strict parent that’s very one dimensional. Then I read this book that is so nuanced and complex, and the mother character is not just strict. She has an entire backstory. We understand why she is the way she is and we learn about the secrets she’s keeping. And I was like, ‘Holy crap, this is so ahead of Hollywood.'”

“I will talk about my friend Jay Shetty, who has a book called Think Like a Monk. Aside from being my friend, something I’ve learned from not only his book, but him as a person, is to be careful who you take advice from, especially when you read self-help.

“There’s a lot of self-help out there and most of it’s on Instagram. I think as humans we tend to gravitate toward people we’re comfortable with or we idolize and we get advice from them, even though perhaps their advice is not the best advice for us.

When he talks about stories and how he learned the lessons while he was a monk, it’s just unlike anything else you’ll read because he’s not guessing. He’s not making it up.​​​​​

“Rather, I challenge people to get advice from people who have the experience to give that advice. So, Jay, I feel like, is someone who undeniably has the most amount of experience to give advice. He was a monk for many years. He has studied wisdom and mindfulness in ways that many other people have not. When he talks about stories and how he learned the lessons while he was a monk, he’s just unlike anything else you’ll read because he’s not guessing. He’s not making it up.”

The Windfall by Diksha Basu

“I’m reading this book called The Windfall and it is one of the funniest books I have ever read. It’s about South Asians, but it is about something we don’t talk about enough, which is this very elite, competitive nature of well-off South Asians.

“So often when you see anything about South Asians, it’s usually poverty porn or it’s really strict parents or people struggling or trauma or pain. Very seldom do I get to experience stories where South Asians are happy and celebrating and rich and fabulous. So this story just cracks me up because it reminds me so much of some of my aunties and uncles. They’re just so competitive with each other, with their saris and their houses and they’re trying to show off to each other. It’s such an honest take on that behavior that I’ve never before been exposed to.

“Sometimes I feel like I need to downplay my success or achievements because I don’t want to appear egotistical and I don’t want to appear stuck up. I want to make sure I’m super humble and relatable, but sometimes that’s to my detriment. I’ve been battling with this idea of, maybe it’s good to flex a little bit. I do believe that young girls have to see it to know it’s possible.

I’ve been battling with this idea of, maybe it’s good to flex a little bit. I do believe that young girls have to see it to know it’s possible.

“This book has kept me thoroughly entertained and given me the confidence to be that much more honest in my own writing because I don’t even know if I could be that honest writing about this behavior. But this is such an honest take on this community that I really enjoyed.”

Lilly Singh’s comments have been edited for length and clarity.