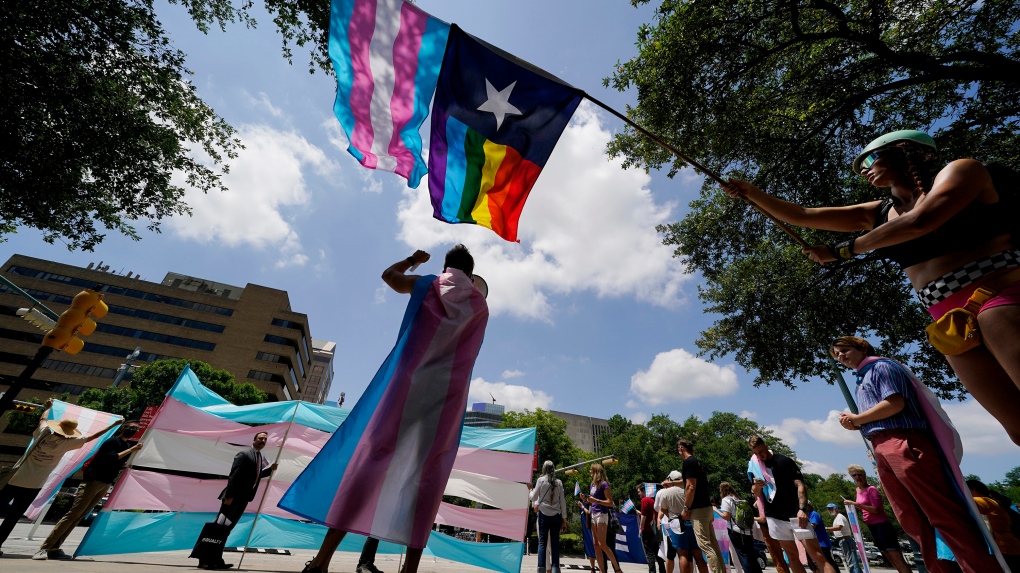 In what’s being described as the largest study attempting to tackle a narrative surrounding transgender health, researchers looked at data on more than 90,000 teenagers across the US and found no evidence that “social contagion” is driving transition rates among trans or gender diverse adolescents.

Researchers say teens assigned female at birth (AFAB) were no more likely than teens assigned male at birth (AMAB) to identify as trans or gender diverse, potentially refuting a core tenet of an idea experts say is currently being leveraged politically to eliminate health care for trans youth.

In the study published Wednesday in Pediatrics, the official journal of the American Academy of Pediatrics (AAP), researchers looked at national data collected in the US in 2017 and 2019 in order to challenge the controversial theory of “rapid onset gender dysphoria” (ROGD ).

This theory, viewed by many experts and critics as transphobic, suggests that many teens suddenly decide to transition as teenagers purely to fit in with friends, likening transition to a dangerous fad.

A 2021 position statement co-signed by more than 60 international health-care and scientific organizations, including several Canadian ones, condemned the theory, stating that “there are no sound empirical studies of ROGD.”

But it can be hard to knock down an argument that lacks scientific basis. Some experts in transgender health have criticized the new AAP study, stating that building a study on the premise of challenging a fringe theory such as ROGD is flawed.

They also cautioned that this new study’s methodology may not be rigorous enough to support its strong conclusions, stating that only looking at data from two points in time is insufficient to describe a trend, and that some US states make up a greater weight of the sample than others.

Dr. Carl Streed, an assistant professor at Boston University School of Medicine, research lead for the Center for Transgender Medicine and Surgery at Boston Medical Center, is one of the authors of a letter published Thursday critiquing the methodology of the AAP study.

“My general takeaway is don’t let people looking to cause harm set the research agenda and don’t use data that cannot answer the proposed research question,” he told CTVNews.ca in an email sent Thursday evening.

The main assertion of ROGD is that youth assigned female at birth are more susceptible to “social contagion”, with supporters pointing to some smaller studies as evidence of a disproportionate rise in AFAB trans teens.

However, the AAP study found no evidence of the disproportionate increase ROGD describes, with their data showing the percentage of AFAB youth identifying openly as transgender or gender diverse actually decreased slightly from 1.9 per cent in 2017 to 1.4 per cent in 2019, and that AFAB youth were not overrepresented among trans teens as a whole.

“The hypothesis that transgender and gender diverse youth assigned female at birth identify as transgender due to social contagion does not hold up to scrutiny and should not be used to argue against the provision of gender-affirming medical care for adolescents,” Dr. Alex S Keuroghlian, director of the National LGBTQIA+ Health Education Center at The Fenway Institute and the study’s senior author, said in a press release.

The study also looked at data on bullying, in order to address another persistent component of ROGD: the suggestion that cisgender teens might be transitioning genders purely to escape being persecuted for being gay or lesbian, or because transitioning provides social benefits.

The study showed that cisgender adolescents of a sexual minority, such as gay, lesbian or bisexual, did experience more bullying than their straight peers.

“The idea that attempts to flee sexual minority stigma drive teenagers to come out as transgender is absurd, especially to those of us who provide treatment to [trans and gender diverse] youth,” Dr. Jack Turban, incoming Assistant Professor of Child & Adolescent Psychiatry at The University of California and the study’s lead author, said in the release.

“The damaging effects of these unfounded hypotheses in further stigmatizing transgender and gender diverse youth cannot be understated.”

The study used data collected in the 2017 and 2019 Youth Risk Behavior Survey (YRBS), a biennial survey of high school students conducted by the US Centers for Disease Control and Prevention.

The authors of the scientific letter in response to the AAP article noted that in both 2017 and 2019, the majority of the survey participants came from Maryland, Vermont and New York, with Maryland making up more than half of all respondents in 2017. This suggests that the sample is more indicative of the adolescent population within these states, as opposed to a weighted sample that could be more easily generalized nationally.

When looking at the student body as a whole, the study found that less youth were identifying as trans or gender diverse in 2019 compared to 2017.

Since a part of ROGD includes the perception that AFAB teens are transitioning at faster rates, researchers looked at how many trans or gender diverse students were AMAB vs. AFAB and found that both years showed fewer AFAB trans youth.

The letter noted that these ratios shift slightly when the dominating data of Maryland is removed, reducing the statistical significance. The authors of this letter include experts from the University of Washington and the Center for Applied Transgender Studies, among others, and clinicians working in gender-affirming care.

The letter, which is available online as a preprint pending review by AAP, stresses that while the data doesn’t support ROGD claims when the variability between the states is taken into account, the study framing is not capable of providing a dramatic refutation of it , calling the results “over interpreted”.

“We applaud the authors for their approach to address the deleterious and unsubstantiated rhetoric of the anti-transgender movement,” the letter stated. “However, science and public health as a tool of social justice requires methodological rigor in addition to conviction and intent.”

They noted that ROGD is a “gross misinterpretation of trans communities’ social support, cohesiveness, and connectedness,” and that the struggle for high-quality data on trans experiences is ongoing.

ROGD has not been accepted as a clinical diagnosis by any major psychological or medical organization, but the authors of both the AAP study and the letter say that the theory’s influence needs to be challenged.

The concept tracks back to a widely discredited study from 2018, which resulted in an apology and a correction posted by the journal that published it.

Even though that initial study was based entirely on interviews of parents of trans teens, many of whom had been sourced through apparently anti-trans online forums, and sparked immediate scientific condemnation for its bias, the concept of ROGD took hold in political and social discourse .

As of March 2022, 15 US states had restricted access to gender-affirming care for teens or were considering legislature to do so — with many lawmakers citing the so-called threat of social contagion among their reasoning.

“This study comes as there are many political attacks against trans youth in legislative arenas,” Turban said on Twitter Wednesday. “The social contagion and fleeing LGB stigma hypotheses have featured prominently in these debates.

“We hope [this] new data will be urgently brought to those legislative discussions.”