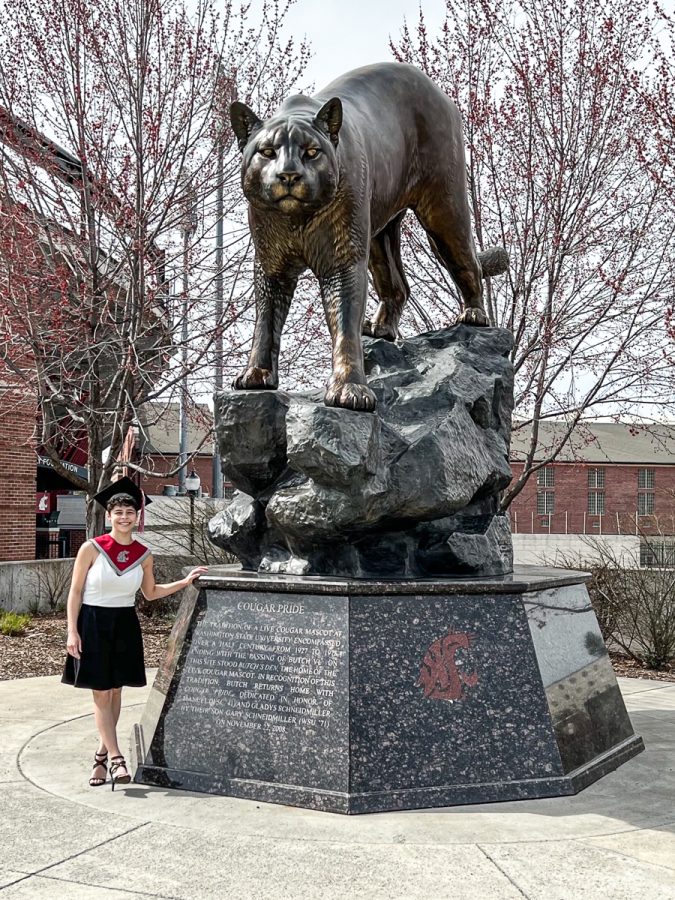 When she plays the role-playing game Dungeons & Dragons with her friends, WSU senior Alexandra Puzon plays the Druid class for its healing capabilities.

In her DnD experience, she noticed a balanced party requires a healer, but nobody wants the responsibility. Therefore, she always fulfills this important role, so healing is taken care of.

Puzon’s adventures with the Druid class are not too far from her experiences in medicine. From her shadowing doctors, working in medical tents and researching disease at WSU, Puzon shows real-life interest in healing, too.

Her mother inspired her passion for medicine at an early age, she said. Puzon’s mother encouraged her and her sister to seek self-sufficiency and independence. Puzon’s sister also grew up interested in life sciences, further strengthening this family dynamic.

Puzon also grew up regularly seeing an immunologist who was incredibly patient with her and explained why she needed to take her medicine routinely.

“She was a wonderful person, and I am bad at taking medication,” she said. “But she was always great about communicating with me what my conditions were and how the medicine she was prescribing would help.”

Prior to college, Puzon shadowed at a family clinic in Renton, Washington, and volunteered for a medical tent at the Seattle Rock and Roll Marathon.

“You never really think about what happens behind the scenes until you’re actively working there,” she said.

While her shadowing experience is in family health care, Puzon said she would like to work in an emergency clinic to get away from the monotony of seeing the same patients over long periods of time.

When she shadowed in emergency care, Puzon saw a wide variety of cases in a fast-paced environment. She was hooked.

She said she started at WSU as a neuroscience major but found it difficult to study the pathways in the brain. Her interest in microbiology was piqued by slides from her friend’s parasitology class.

“She ended up converting me to microbiology, and I haven’t really looked back since,” she said.

At WSU, Puzon also became involved with undergraduate research using yeast to model DNA mechanisms in human disease in a lab run by Steven Roberts, associate professor in the School of Molecular Biosciences.

In the lab, she demonstrated a keen interest in what she was doing, said Nick Vyas, WSU senior genetics and cell biology major. Puzon has a passion for helping people and a resilience from working on projects that continuously fail as part of the process.

Puzon does not fear failure. Failures result in lessons, so there is nothing to fear, she said.

Puzon received great amounts of encouragement and support in the lab and from doctors she has shadowed. Their confidence reassures her that she will become a good doctor, she said.

Puzon’s next step is medical school. She said she is ready for whatever outcome her applications have, whether she gets in or not.

If she does not get into medical school this round, she said she can apply again, perhaps after retaking the admission test to improve her score. In the meantime, she would work in a diagnostics lab. She has already applied to work at the Washington Animal Disease Diagnostics Laboratory on campus.

In addition to being a researcher and an aspiring healthcare professional, Puzon said she wants to share a big property in Washington with her long-term boyfriend and partner one day. They would like to build an armory and forge a collection of classic weapons and armor.

“I want to make a set of leather armor for myself because that would be sick,” she said. “And then a sword, which is like a naginata. It’s basically a spear with a curved blade on one end. Polearms are great if you’re short like me because you can compensate with reach.”

In college, Puzon encourages students to get involved with clubs and research. She participated in the archery club, which was a welcoming community to first learn with, she said.

“Get involved on campus; find something you enjoy. It doesn’t have to be aligned with whatever you want your career to be,” she said.

Time management is also an important skill, especially for pre-professional students, she said. Puzon said the high volume of content in the WSU School of Molecular Biosciences can be a challenge. She said it is a balancing act to do well in her classes and maintain her mental health.

“Make sure you don’t go insane,” she said.