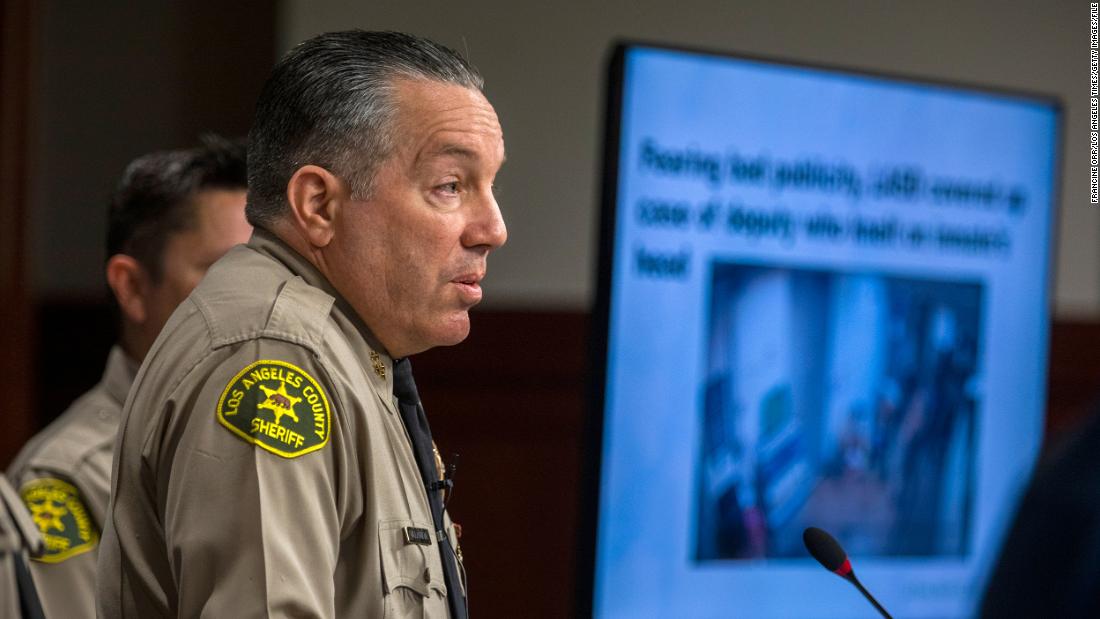 Limon alleged in a legal claim filed Thursday that Villanueva retaliated against her “for being a whistleblower on several instances of illegal and other wrongful conduct and to further his cover up of an excessive use of force incident.”

That incident occurred March 10, 2021, at the San Fernando Courthouse. An inmate struck a deputy who then kneeled on the inmate’s head and “restricted his breathing long after” the inmate had stopped resisting, Limon’s claim alleges.

The deputy’s actions, caught on video, were reminiscent of those of former Minneapolis officer Derek Chauvin against George Floyd, the legal complaint alleges. Jury selection in Chauvin’s murder trial had begun the day before.

But instead of following proper procedures, Villanueva sought to block further action related to the incident to avoid “bad media,” Limon claims.

In a statement to CNN, the sheriff’s department said, “Due to multiple active investigations, and two civil lawsuits, we are unable to comment further at this time. We look forward to presenting the facts in court.”

Villanueva, who heads the country’s largest sheriff’s department, is up for re-election in June.

Official has history of ‘reporting and raising concerns’

Limon’s claim alleges she brought a DVD with video of the courthouse incident to Villanueva around March 15, 2021, after learning of it from other officers.

After they watched the video, Villanueva told her the sheriff’s department did not “need bad media at this time,” and said he would “handle the matter,” the claim states.

Limon also accused the sheriff of later lying about when he initially watched the video to “fit a fake timeline.”

The claim states Limon has a history of “reporting and raising concerns” about the sheriff’s wrongful conduct beyond the 2021 incident.

That conduct includes the sheriff’s “habit of retaliating against people with differing opinions and whistleblowers,” using department resources to “further his re-election political campaign” and promoting individuals who were not qualified or had been found to have committed wrongful acts or were under investigation, the claim alleviates.

Limon is asking the county to pay $5 million in damages for what she alleges was the sheriff’s pattern of retaliation against her, including a four-rank demotion.

The Los Angeles Times originally reported allegations of a coverup and published an excerpt from surveillance video of the courthouse incident on March 25.

The deputy kept his knee on the inmate’s head for three minutes, according to the Times.

In its initial article, the newspaper reported on an internal review by Commander Allen Castellano, who was critical of how the case was handled.

Department officials were worried about the optics of the case “given its nature and its similarities to widely publicized George Floyd use of force,” Castellano wrote in the review, adding those officials decided not to pursue criminal charges against the inmate to avoid drawing attention to the incident, according to the Times.

A sheriff’s department spokesperson said earlier the sheriff found out about the incident in October and immediately ordered an investigation into the deputy, who was relieved of duty, the Times reported. At a Tuesday news conference, the sheriff said he originally saw the video of the incident in November, and the October date his officer gave earlier was an estimate.
Castellano was the first official to file a legal claim this week, accusing Villanueva of obstructing justice, the Times reported. Like Limon, he alleged the sheriff watched the video just days after the incident, according to the Times.

Sheriff lashes out at reporter over cover story

At his news conference, Villanueva lashed out and indicated the journalist who had been reporting the case and coverup allegations, Alene Tchekmedyian, was under investigation.
The sheriff attempted to walk back those comments later in the day, saying in a department tweet that at “no time today did I state an LA Times reporter was a suspect in a criminal investigation. We have no interest in pursuing, nor are we pursuing, criminal charges against any reporters.”
Villanueva has claimed without evidence that the media was strategically timing the release of negative stories to hurt his re-election bid.

His statements Tuesday alarmed press freedom advocates. Katherine Jacobsen, the US and Canada Program Coordinator for the Committee to Protect Journalists, told CNN his “implication that Alene Tchekmedyian did anything wrong by reporting on law enforcement conduct shows a basic lack of understanding about how journalists operate.”

“Reporters should not be vilified or threatened with investigation for simply doing their jobs and covering matters of public interest,” Jacobsen added.

In a letter sent to the sheriff last month, Los Angeles County Inspector General Max Huntsman requested documents that had still not been turned over to investigators as part of an investigation into “deputy gangs” at the sheriff’s office. In that letter, Huntsman said at least 41 deputies had so far been identified as being members of gangs.

In a previous statement, Villanueva has called the probe into law enforcement gangs a “fishing expedition and political theater.”

CNN’s Taylor Romine and Jason Kravarik contributed to this report.