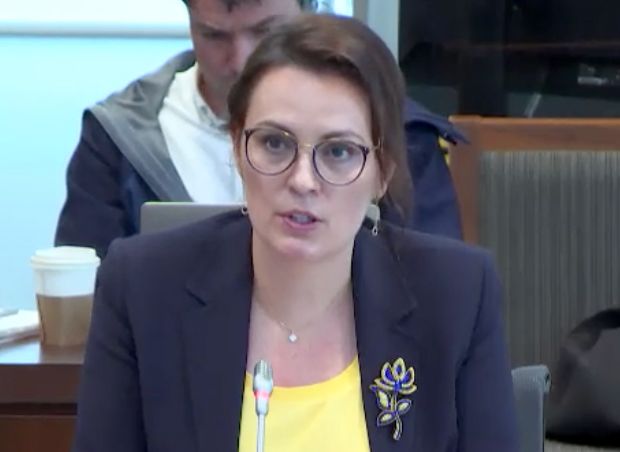 Canada should revoke the exemption that allowed it to return a turbine to Russia after that move failed to restore the flow of gas to Germany, Ukraine’s ambassador to Canada told MPs Thursday.

“The permit was issued with high hopes of the government of Canada to help strategic partners in Europe. Since this step has obviously failed to bring the expected result, we asked you to revise this decision,” ambassador Yulia Kovaliv said at the House of Commons foreign affairs committee Thursday.

“The permit was stated to be revocable, and nobody wants the other five turbines to repeat the sad story of the current one.”

The decision by the Liberal government to return a Russian turbine was a “very difficult” one that the government only took after considering alternatives, Foreign Affairs Minister Mélanie Joly said at the committee earlier in the day. The exemption covers six turbines in total and is in place for a maximum of two years.

Kovaliv said it’s now “more than clear that additional five turbines … will be turned by Russia into tools of humiliation. And we urge you not to take the bait.”

In July, Canada decided to return the turbine, which had been in Montreal for repairs, despite sanctions imposed on Russia over its invasion of Ukraine. While Ukraine opposed the return, Germany had been pushing Canada to release the turbine. Germany is dependent on Russian gas, and the turbine is used in the Nord Stream 1 pipeline that provides Germany with natural gas from Russia.

“I cannot overemphasize the depth of the concern on the part of the Germans, but also on the part of the European Union, with respect to the potential implications associated with them effectively not being able to access natural gas,” Natural Resources Minister Jonathan Wilkinson told the committee.

He said “you need to be able to explain to the Germans and the French and the Italians how they’re going to survive the winter.”

But the return of the turbine hasn’t solved the issue. The turbine is now stuck in Germany, with Russia blaming western sanctions for the hold up, while Germany says there is nothing preventing its return. Russia has also cut gas flowing through the Nord Stream 1 pipeline to 20 per cent of capacity.

“With the issue of turbine maintenance taken off the table, Putin has nothing left to hide behind. When the flow of gas slows down, the world now knows with certainty that it was Putin’s decision and his alone,” Joly said.

Those statements were echoed by German ambassador Sabine Sparwasser who told the committee that “we did not want to fall into Putin’s trap” after he “pretended” the lacking turbines were to blame.

She said Russia is now finding “more and more pretext not to take the turbines back.”

“Now it’s clear for all to see Russia is using energy to exert pressure on Europe. It’s trying to pit one ally against the other,” Sparwasser said.

She said if the turbine hadn’t been returned, it would have given Putin a “strong argument in the disinformation war” that “we brought the lack of gas on ourselves.”

Wilkinson said the government looked into an alternative proposal from Ukraine for a pipeline route through that country but decided it wasn’t feasible.

He said the government consulted with the EU and Germany and “technical experts from the International Energy Agency” and in the end concluded it wasn’t “viable,” for technical reasons but also because the plan would have been dependent on Russia’s willingness to provide gas for the alternate pipeline. “The likelihood of Russia doing this is not high,” he said.

Sign up to receive the daily top stories from the National Post, a division of Postmedia Network Inc.

The next issue of NP Posted will soon be in your inbox.