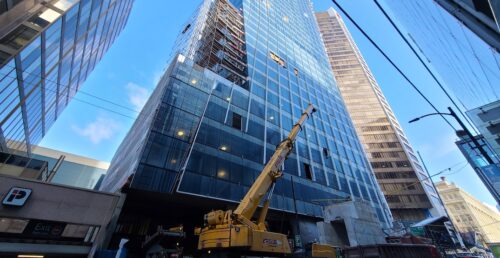 The office vacancy rate for the overall Metro Vancouver region saw its second consecutive quarterly decline, with the rate falling very slightly to 6.9% in the first quarter of 2022, according to a new CBRE market update.

However, downtown Vancouver’s office market saw a slight vacancy increase from 7.2% in the fourth quarter of 2021 to 7.7% in the first quarter of 2022.

This is downtown Vancouver’s highest vacancy rate during the pandemic, slightly exceeding the previous high of 7.6% in the third quarter of 2021, which is still considered a balanced/healthy rate. Despite the uptick, downtown Vancouver still has the lowest office vacancy rate among major city centers in North America.

Across Metro Vancouver, there is currently 3.7 million sq ft of new office space under construction.

Moreover, 67.6% of the 2.9 million sq ft of new office space being built in downtown Vancouver is already pre-leased, while 50.1% of the 787,000 sq ft under construction in the suburbs is pre-leased.

During the first quarter of this year, Deloitte Summit at 410 West Georgia Street saw the completion of its 355,000 sq ft of office space, marking the first major office building to reach completion during the pandemic.

Earlier this week, construction officially began on a 23-storey office tower with 344,000 sq ft of space at 1166 West Pender Street, which is the first major office building to begin construction since the pandemic began. 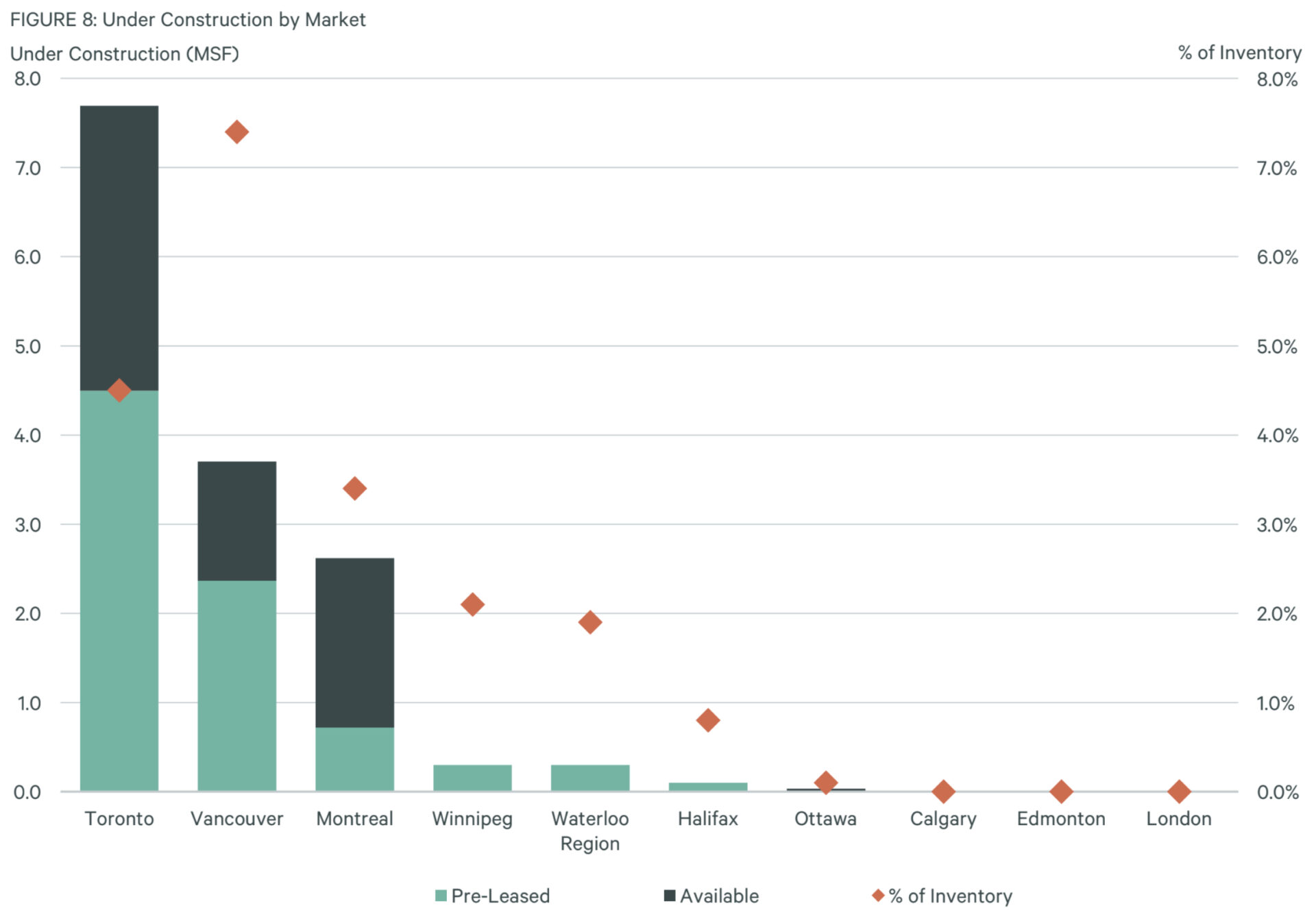 “The pandemic and hybrid office models aren’t the primary driver vacancy – new supply is and there is a lot of space still to come in the next two years,” said Paul Morassutti, the vice-chairman of CBRE Canada, with the continued growth of the tech industry being a major driver.

“Having said that, office leasing activity was actually quite robust across Canada over the quarter, and downtown cores are coming back to life with the easing of lockdown measures.”

As for other office markets in the country, Ottawa now outranks Toronto as the second tightest downtown office market in North America, with vacancies of 10.2% and 11.3%, respectively.

Downtown office vacancies in Toronto and Montreal each increased by over 1% in the last quarter. Slight decreases were seen in the downtown office markets of Alberta, reaching 32.8% in Calgary and 21.1% in Edmonton.

Exceedingly strong demand in Metro Vancouver’s industrial space market continues to carry over into the pandemic. The region’s industrial availability rate is still hovering at a record low of 0.9% — even though more than 1.4 million sq ft of industrial space reached completion in the first quarter of 2021.

Industrial lease rates have increased by 6.6% quarter-over-quarter to a new record high of $17.40 per sq ft, with pre-lease deals now achieving rates in the low-$20 per sq ft range in some areas.

There is currently 8.93 million sq ft of industrial space under construction, but the vast majority is pre-leased, leaving only 22.4% available to fulfill strong demand. 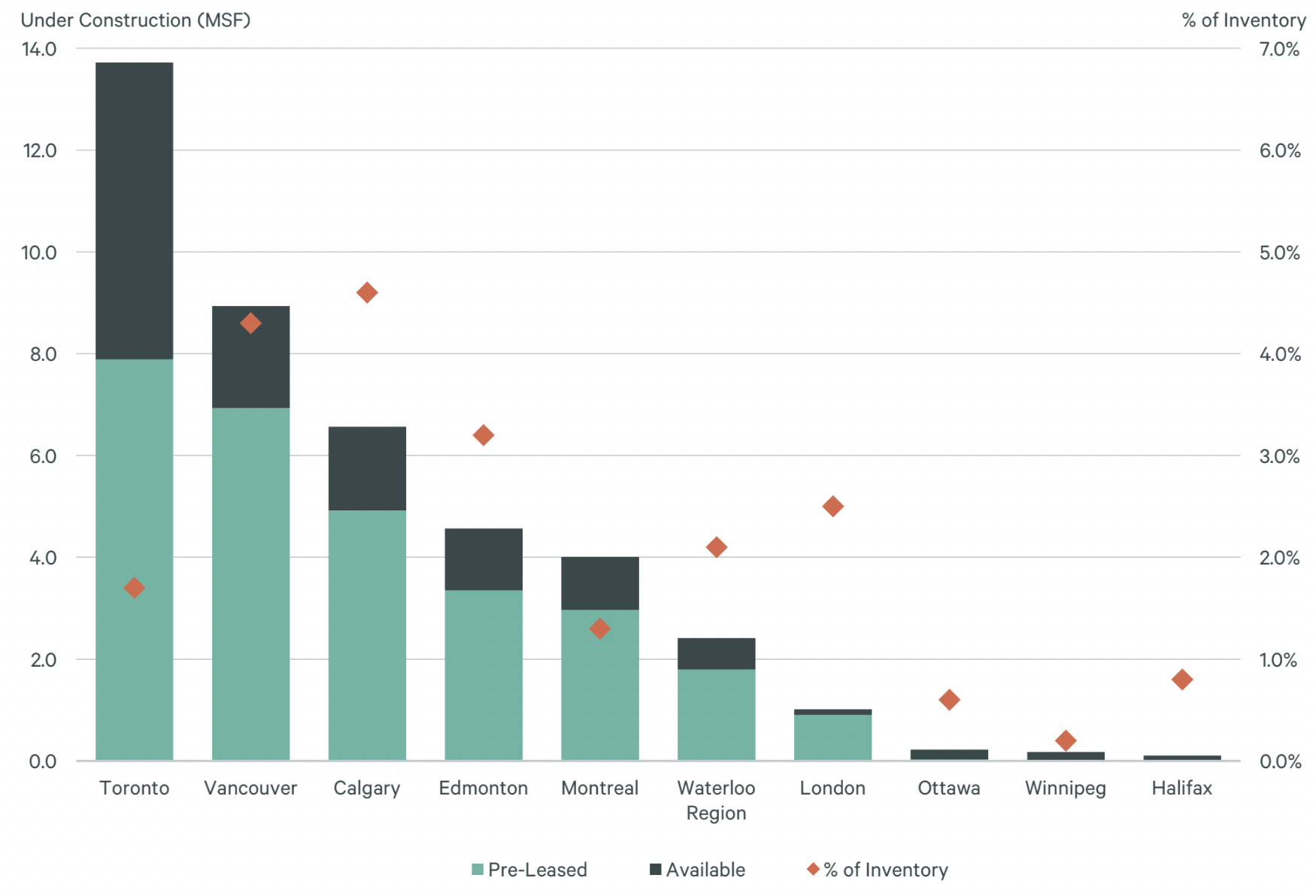