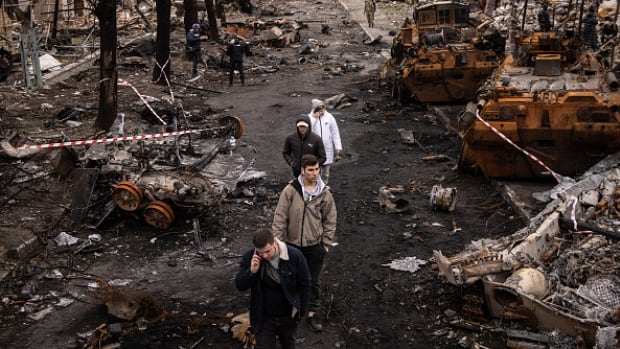 The RCMP has launched a national investigation into allegations of war crimes and crimes against humanity committed in Ukraine.

Police will be collecting “important information and evidence” from those Ukrainians entering Canada who wish to provide it, with the hopes of using the information in future criminal investigations, according to a statement from the partners of Canada’s War Crimes Program.

The War Crimes Program is a partnership between the Department of Justice, RCMP, the Canada Border Services Agency and Immigration, Refugees and Citizenship Canada.

“It is essential that such information be collected and protected at the earliest opportunity, to ensure it is not lost with the passage of time and to preserve crucial evidence for future prosecutions,” the statement said.

A website has been launched to provide Ukrainians information about the investigation, with pamphlets also being given to those arriving at Canada’s airports starting this week and by groups working with the newcomers.

The War Crimes Program is focused on denying safe haven to persons believed to have committed or been complicit in war crimes, crimes against humanity or genocide and to seek accountability for their conduct.

In late March, it was announced the RCMP would send officers to work with the International Criminal Court to help investigate claims that war crimes and crimes against humanity are taking place in Ukraine.