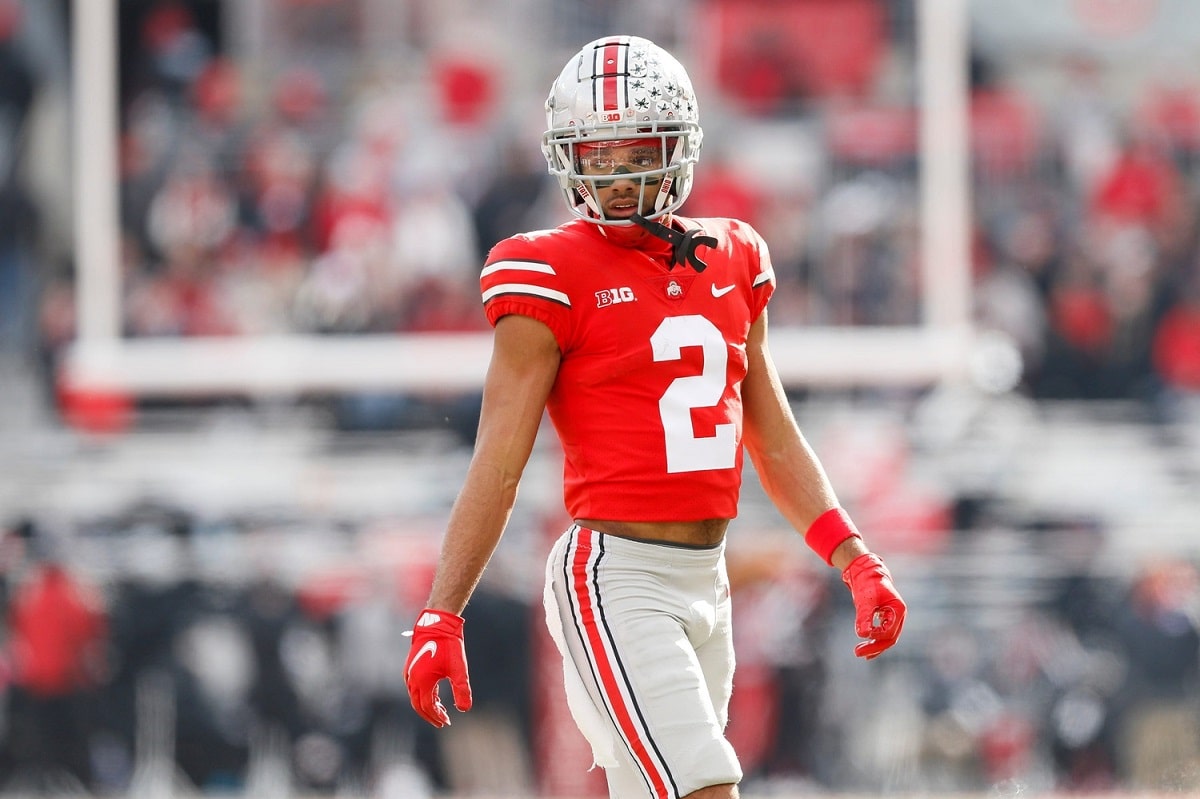 The Chicago Bears have had months to make some sort of bold move to help Justin Fields on offense. Instead, GM Ryan Poles has opted for a more practical approach. He’s pinpointed some cheaper free agents with upside like Byron Pringle and Lucas Patrick. Not household names by any means but players that are good fits for what the Bears want to do. Most expect the same approach when the Bears get to work in the upcoming NFL draft.

Or it could just be an elaborate ruse. Poles might have his bold move in mind already. Something that should really shake up the draft and hopefully make Fields happy. Anthony Treash of Pro Football Focus offered up a big one. In a deal with the Philadelphia Eagles, he had the Bears jumping to the 16th pick in the 1st round. One that ensured the team could reunite Fields with his favorite target.

Right now, Chicago’s main goal should be to put quarterback Justin Fields in a position to succeed before going all-in in free agency in 2023. And given the state of the team’s current wide receiver room, new general manager Ryan Poles should be aggressive when it comes to adding more talent to the offensive side of the ball in the draft.

The potential of reuniting Fields and Olave could tempt Ryan Poles into trading back into the first round. For the Eagles, it makes sense to stock up on draft capital for next year, as there’s a possibility they could be in the quarterback market.”

This is a dream scenario for many Bears fans.

For the past three years, Chris Olave was one of the most dangerous receivers in college football. His underrated speed, sharp route-running, and great hands enabled him to gash defenses almost at will. He clearly had a strong connection with Fields. The two connected for over 1,500 yards and 19 touchdowns in 20 games between 2019 and 2020. A trio of him, Darnell Mooney, and Byron Pringle would be something to get excited about.

The cold reality is this idea is highly unlikely to happen. Chicago only has six picks in the draft, which means they’d have to dig into their 2023 and maybe even 2024 inventory to pull such a trade off. That would go against everything Poles has indicated thus far as GM. Then there is a strong likelihood that Olave could go even higher than the 16th overall pick. As good as he is, no receiver is worth that.

Chicago Bears are ready and willing to take their chances.

The draft has proven that good wide receivers can be found outside the 1st round year after year. Last year was another example. Amon-Ra St. Brown, a 4th round pick, had over 900 yards receiving. Darnell Mooney cracked 1,000 yards last season, and he was a 5th round pick. Smart teams understand you don’t have to spend the highest picks at that position. Not when the odds are good you can find strong contributors later on.

This is why it is more likely the Chicago Bears will focus on the trenches in the 2nd round. Especially the offensive side. Protecting Fields is as vital as arming him, if not more so. There is also a far greater chance Poles will look to move down via trade rather than up in an effort to add extra picks. He wants to build this team through the draft, and he knows they’re more than one player away from competing.

Missing out on Olave will sting, especially since the Bears could have him if they still had their 1st round pick. Sadly that was lost in the Fields trade. Then again, if the young QB takes a big step forward in the next year or so, nobody will even worry about such things.