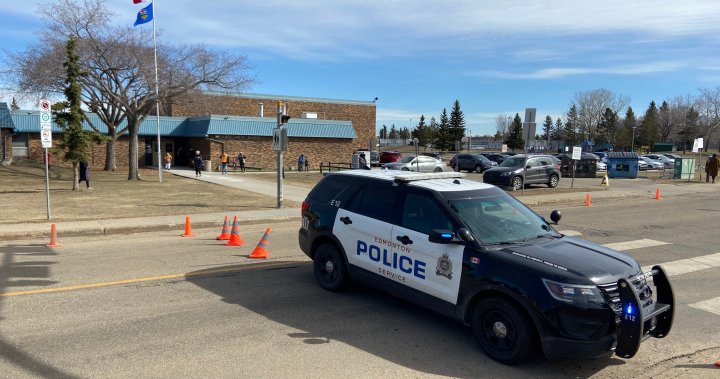 Police are investigating a shooting in the southeast Edmonton community of Richfield.

The shooting happened at about 11 am Thursday in the area of ​​82 Street and 36 Avenue. Police said it was reported that someone had been shot.

EMS treated a woman in her 20s on scene and took her to hospital with non-life-threatening injuries, police said. No other injuries were reported.

Before noon, police remained at the scene, which was outside of Grace Martin School. Bullet holes could be seen in a nearby transformer box, which was near the school’s parking lot.

A statement from Edmonton Public Schools said staff learned of an injured person outside the school and immediately placed the school on alert, meaning the exterior doors are locked but all activity inside continues, while waiting for first responders.

The school was briefly under a lockdown while police secured the building.

Parents picking up their children said they were quite concerned to arrive to see the police presence.

“I just came to the school and I saw all the police cars and the flashlights and then I talked to the principal and he said that they were told to call the police and that the school went on lockdown. The kids were all safe and good,” said Sarah Sim, who has one child in Kindergarten and another in grade 1.

“It makes me feel very worried, especially because there’s lots of families and kids nearby…. It definitely puts fear into a parent.”

Sim said she lives nearby, but did not hear any shots being fired.

Tamana Jaddar has a child in Kindergarten at the school and said she didn’t know what was going on, but was told by the school that the kids were not in danger.

“It’s obviously concerning,” she said. “We weren’t concerned before but of course things like this happen, they can happen anywhere.”

Edmonton police believe the shooting was targeted and said there was no public safety concern. The school district said no students were outside at the time of the incident.

1:01
Police on increased gun violence in Edmonton: ‘Only a matter of time until innocents are hurt’

Police on increased gun violence in Edmonton: ‘Only a matter of time until innocents are hurt’ – Mar 16, 2022

The injured woman has no ties to the school, according to police.

– With files from Kirby Bourne, 630 CHED