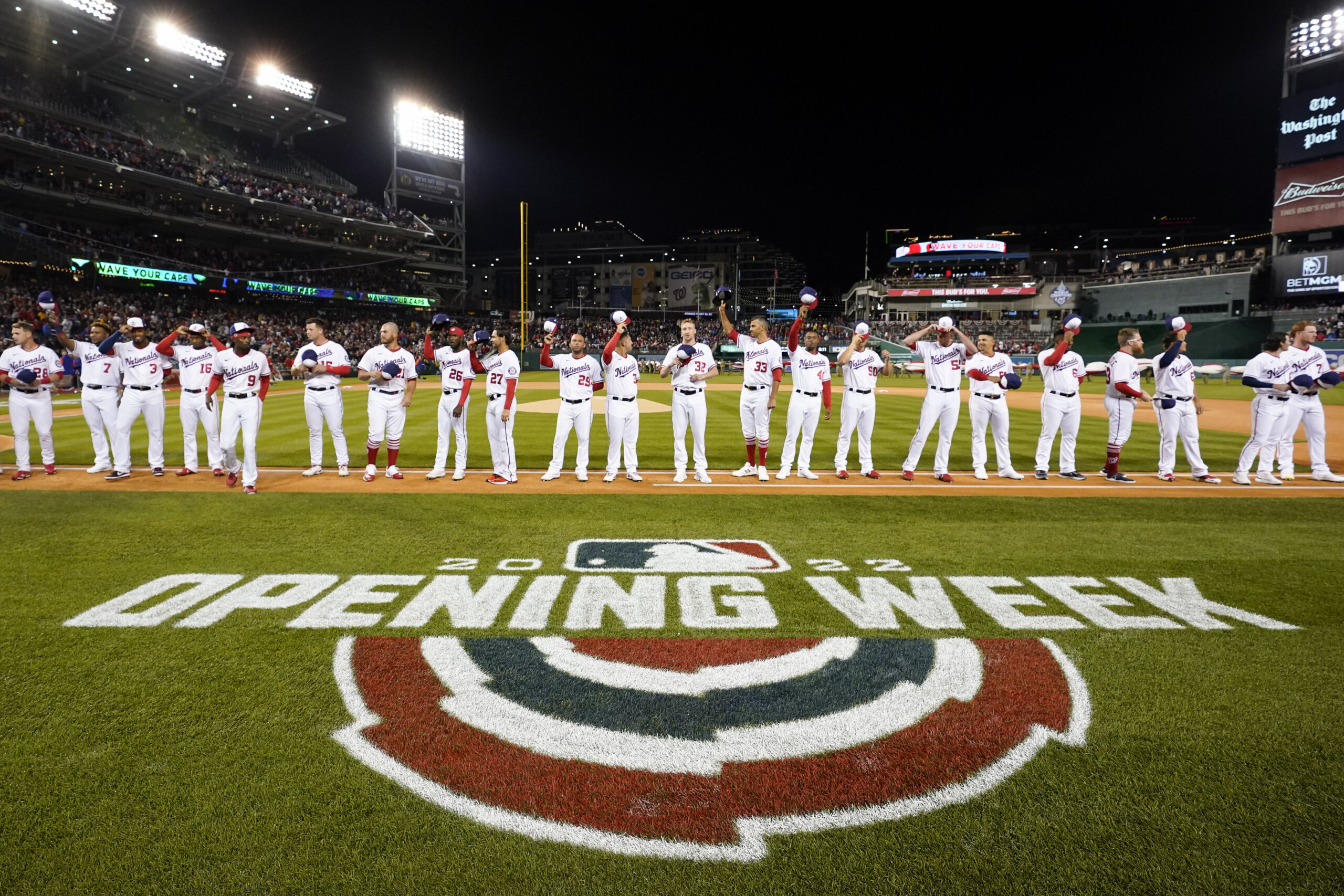 The Washington Nationals take on the New York Mets for their first regular season game of 2022. Here’s what you need to know for opening day.

After the rain pushed back the start time, the Washington Nationals’ first game of the 2022 regular season against the New York Mets Thursday at Nationals Park finally started more than four hours later.

Loyal fans waited for hours in the rain in what WTOP reporters on the scene described as a “celebratory” mood that baseball is back in DC again.

And for fans who braved the delays and the rainy weather to the end of the game, trains were suspended between Congress Heights and the Navy Yard for a police investigation. Shuttle buses were provided for those heading south of Navy Yard.

The game was slated to begin at 7:05 pm following a three-hour delay for inclement weather, but that was pushed back again. At 6:15 pm — less than an hour before the game’s attempted start — the official Nats Twitter account tweeted an announcement for a second delay, following up with a new time of 8:20 pm Thursday.

WTOP’s Sarah Jacobs reported fans were a little disappointed by the rain, but kept their umbrellas handy.

“It’s an American tradition, we’re pretty big baseball fans and we haven’t been able to do this kind of thing in a couple of years,” said Darren, at the Nats game with his family from Kensington, Maryland. “It’s great to bring them out.”

Two fans who are part of a group of four who have been to every opening day said that the tradition is a bond of friendship. They always plan ahead to be off from work during Opening Day, they said.

Nationals Park opened its gates to fans after 5 pm, said Jonathan Stahl, the Nationals’ vice president of experience and hospitality. All tickets and parking passes for the original start time were honored at the postponed game.

“All of our focus is paying attention to forecasts and making sure that when the game does start, we’re out there in the field, it’s safe and it’s playable,” John Turner, the Nationals’ director of field operations, said earlier on Thursday.

Those not interested in going out in bad weather can watch the game on the Mid-Atlantic Sports Network.

Despite the rain, Turner told WTOP the field is designed for drainage.

Left-hander Patrick Corbin got the start on the mound for Washington. Since having a career year in 2019, the 32-year-old has struggled in each of the last two seasons, amassing a combined 11-23 record with an ERA of 5.82. However, manager Dave Martinez said he’s seen a different pitcher during spring training.

Entering Nats Park should be faster this season as new metal detectors will allow fans to walk right through the gates and head to the turnstiles to scan their tickets without the need of clearing out their pockets.

This year, fans are only permitted to bring in see-through and clear bags. Diaper bags and medical bags will be the exception, but you will have to go through the ADA-Family Lane, along the center field gate and your bag will be inspected the old way. Small, non-clear clutch bags that measure 5 inches by 7 inches or smaller are allowed. Read more on the bag policy.

Fans who arrived at the game may notice that one of Navy Yard’s popular sports bars might not have their “streeery” open for pregame action. The owner of Walters, Jeremy Gifford, said DC’s Department of Transportation told him its streatery was not compliant, and that “due to public safety and traffic safety,” the restaurant couldn’t use it on game days.

Inside the ballpark, several of new food options this year are local, with some options that fans haven’t had before. Area favorites you’ll find on the menu this year include Rockland’s BBQ, Hard Times Chili, Duke’s Grocery and Roaming Rooster.

Cash will not be accepted this year at Nationals Park to help keep lines moving faster. Last year, almost 40% of all food and beverage orders were done through ordering on the Ballpark Mobile App. This year, team officials hope to expand the app’s usage so fans won’t have to wait long, if at all.

What should you expect from this year’s Nationals? WTOP’s Sports Team discusses expectations for this year’s younger roster and more in this week’s edition of the DC Sports Huddle, which is available to listen before a ball is pitched at Nats Park.

And check out the WTOP Sports Team’s predictions for this season in the video below.