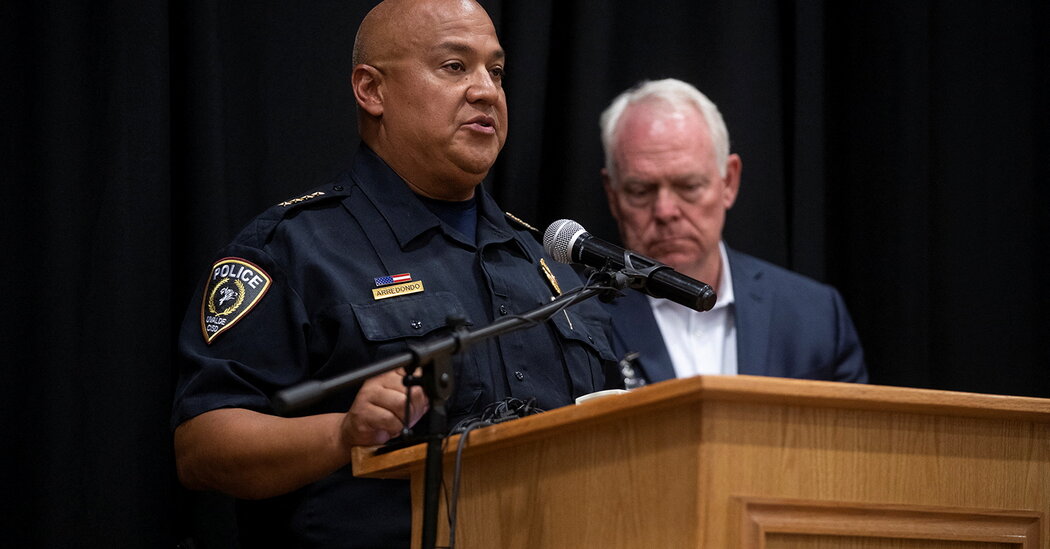 Pete Arredondo, the chief of the school district police force in Uvalde, Texas, resigned as a member of the Uvalde City Council on Friday amid continued outrage over the slow police response to a shooting at Robb Elementary School in May.

In a letter addressed to the city, Mr. Arredondo said that after much consideration, “it is in the best interest of the community to step down as a member of the City Council for District 3 to minimize further distractions.”

He added that the mayor, the city council and the city staff “must continue to move forward to unite our community, once again.”

His resignation was first reported by The Uvalde Leader-News.

Mr. Arredondo was elected to the city council shortly before a gunman killed 19 students and two teachers at Robb Elementary School on May 24. On June 22, Uvalde’s school police force announced that it had placed Mr. Arredondo on administrative leave after the state’s top law enforcement leader called the police response “an abject failure.”

Mr. Arredondo was among the first officers to arrive at the school after the shooting began. According to the director of the state police, Steven McCraw, he was also the incident commander for the response. Though officers from several agencies entered the school minutes after a gunman opened fire in two connected classrooms, they waited more than an hour before confronting and killing him.

Mr. Arredondo has defended his decision-making that day and said in an interview with The Texas Tribune that he did not believe that he was in charge of the response. The shooting and the police response are the subjects of several investigations, including one by the US Justice Department.

After Mr. Arredondo was sworn in as a council member, he did not appear at any council meetings.

“I think it was the right thing for him to do,” Don McLaughlin, the mayor of Uvalde, said in a text message of Mr. Arredondo’s decision to resign. “We did not know anything about it until we saw it posted on the paper’s site.”

On June 21, city council members met to discuss Mr. Arredondo’s request for a leave of absence. One by one, Uvalde residents stood before the council and called for Mr. Arredondo to step down.

First to the podium was Jazmin Cazares, 17, who lost her sister and cousin in the shooting.

“After choosing to wait an hour for backup, instead of ordering officers to take down the shooter, he’s proven he cannot do his job,” Ms. Cazares said. “How am I supposed to quit grieving, especially knowing he did nothing to protect my sister, my cousin, her friends and her teachers?” After more residents spoke, the Uvalde City Council voted to deny Mr. Arredondo’s request for a leave of absence.

One week later, a community still reeling from grief welcomed the news of Mr. Arredondo’s resignation.

Martin Herrera, who lost a grandson and has been helping a surviving granddaughter recover from the horror of the day, called the resignation a step in the right direction. Mr. Herrera said Mr. Arredondo should also vacate his post as the school police chief immediately. But Mr. Herrera said he also wanted to see others who botched the response and the aftermath face consequences.

Leonard Sandoval, whose grandson Xavier Lopez was killed in the shooting, said Mr. Arredondo “should have resigned a lot sooner.”

Hugo Cervantes, one of the residents who rushed to Robb Elementary School after hearing shots fired, said Mr. Arredondo’s decision appeared to be no more than another development that delayed justice for the families. He recalled pleading with armed officers to go into the school and being told that “everything was OK,” even though people could still hear gunshots.

“The truth is that they could have saved many children and didn’t,” Mr. Cervantes said. “This is all too little, too late.”