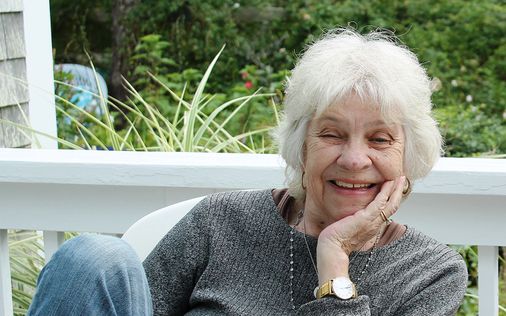 The author of dozens of children’s books written after she turned 35 and her three children had started school, Mrs. MacLachlan was 84 when she died March 31 in her Williamsburg home.

Even after losing her sight in her final years she sought out the company of nature’s sounds by filling bird feeders that dangled from a pulley cord secured to her mountaintop house—beyond reach, for the most part, of visiting bears.

Get Fast ForwardA look at the news and events shaping the day, delivered a couple times a week with a side of humor and a dash of attitude.

“Sarah,” published in 1985, was also presented the Scott O’Dell Award for Historical Fiction the following year. It became the first of five books she wrote about the fictional Witting family that lived at the end of the 1800s and the early 1900s.

Speaking with the Globe after finishing the script for the first adaptation, Mrs. MacLachlan said she welcomed the challenge of a different form of writing.

“I did a lot of rewriting, expanding, and developing,” she said. “It was like writing about relatives that you thought you knew — but boy, do you know them now!”

“Sarah, Plain and Tall” centers on Jacob Witting, a Great Plains farmer who struggles raising his young son and daughter after the death of his wife. He places a newspaper ad seeking a new wife, which Sarah Wheaton answers before traveling from Maine to join the family.

“I will come by train,” she tells Jacob in a letter. “I will wear a yellow bonnet. I am plain and tall.”

In a New York Times review, Martha Saxton said that in an “exquisite, sometimes painfully touching” book Mrs. MacLachlan had given readers “the simplest of love stories expressed in the simplest of prose. Embedded in these unadorned declarative sentences about ordinary people, actions, animals, facts, objects, and colors are evocations of the deepest feelings of loss and fear, love and hope.”

Working diligently to produce such stirring writing, Mrs. MacLachlan was her own most exacting editor.

Upon finishing a draft, she would “go back and delete words, and then go back and delete more,” her son John of Williamsburg recalled. “She said, ‘I love the delete key,’ and if you read her books they’re just so spare — there’s not an extraneous word in them. They’re so extraordinary.”

Invited regularly to speak in schools, Mrs. MacLachlan tried to dispel the exalted images some readers held about writers and the process of writing.

“I think kids often have a kind of stilted idea of ​​what writers are like,” she said in 1990. “They tend to think we lead exciting lives and get it right the first time.”

That was hardly the case, at least not for Mrs. MacLachlan.

“Writing is rewriting,” she told children in an East Longmeadow elementary school in 1986.

Born in Cheyenne, Wyo., on March 3, 1938, Patricia Marie Pritzkau was an only child.

Her father, Philo Pritzkau, had been born in a sod house on a North Dakota farm, she once wrote. He became a teacher and retired as an emeritus professor of the University of Connecticut’s school of education.

Her mother, Madonna Moss Pritzkau, “told me early on about the real Sarah, who came from the coast of Maine to the prairie to become a wife and mother to a close family member,” Mrs. MacLachlan said in her acceptance speech for the Newbery Medal.

“My parents believed in the truths of literature, and it was my mother who urged me to ‘read a book and find out who you are,’ for there are those of us who read or write to slip happily into the characters of those we ‘d like to be,” she said.

The Pritzkau family moved to Minnesota when Patricia was in elementary school and then to Connecticut for her father’s work.

She graduated with a bachelor’s degree from the University of Connecticut, where she met Robert MacLachlan. They married and eventually settled in Western Massachusetts. A clinical psychologist who taught at American International College in Springfield, he died in 2015.

An English teacher and tutor before she became a published author, Mrs. MacLachlan was a storyteller at home.

Her first stories, invented solely for the benefit of her three young children, “astounded us and made us laugh uproariously,” John said.

When she wrote books, they “had great meaning to us, since much of it was taken directly from our family and its history,” John said.

“She was always true to herself,” said her other son, Jamison of Plymouth. “There was no pretense no matter how much success she had.”

Among the many books Mrs. MacLachlan wrote were several she coauthored with her daughter, Emily MacLachlan Charest of Stow, who recalled that her mother’s dedication to refilling the bird feeders outside her home “was the rhythm of her morning,” despite occasional visits by bears.

While visiting several months ago, Emily assisted her mother when a bear stood on its hind legs to try to grab a birdfeeder.

“My mom was very concerned that the bear would get tangled up in the pulley system,” Emily said of their efforts to reel the feeder back to the house. “She was stronger than I was, and we got it away from the bear.”

Her family will announce a memorial service and publish the details online.

In a 2010 Publishers Weekly interview about her book “Word After Word After Word,” Mrs. MacLachlan said her economical writing style owed much to her childhood.

“I was born on the prairie and so everything is kind of spare on the prairie. And so I’m just used to writing in that way,” she said, adding that her “writer’s group laughs that I start to faint when I get to 200 pages.”

Perhaps none of her work, though, owed as much to the quiet, peaceful plains as her books about the Witting family, starting with “Sarah, Plain and Tall.”

“When I began ‘Sarah,’ I wished for several things and was granted something unexpected. Most of all I wished to write my mother’s story with spaces, like the prairie, with silences that could say what words could not,” Mrs. MacLachlan said in her Newbery Medal acceptance speech.

“There is an entire world, complex and layered and full, behind each word, or between words, that is often present but not spoken,” she added. “And it is often what is left unsaid that shapes and empowers a moment, an experience, a book. Or a life.”

Bryan Marquard can be reached at bryan.marquard@globe.com.