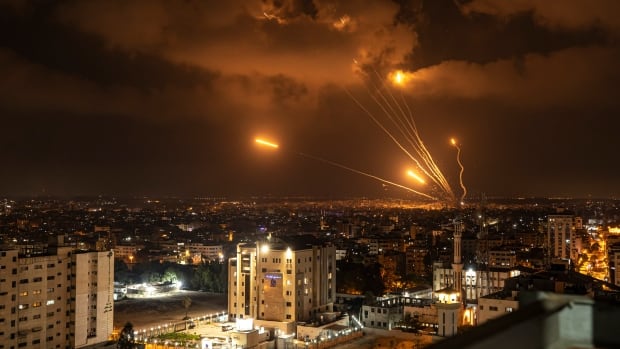 Israel unleashed a wave of airstrikes in Gaza on Friday, killing at least 10 people, including a senior activist, and wounding dozens, according to Palestinian officials. Israel said it was targeting the militant group Islamic Jihad in response to an “imminent threat” following the arrest of a senior militant in the occupied West Bank earlier this week.

The strikes risked igniting yet another war in the territory. Israel and Gaza’s militant Hamas rulers have fought four wars and several smaller battles over the last 15 years, at a staggering cost to the territory’s two million Palestinian residents.

A blast could be heard in Gaza City, where smoke poured out of the seventh floor of a tall building. Meanwhile, a few hundred people gathered outside the morgue at Gaza City’s main Shifa hospital. Some entered to identify loved ones, only to emerge in tears.

The Palestinian Health Ministry said a five-year-old girl and a 23-year-old woman were among those killed and that another 55 people were wounded. It did not differentiate between civilians and militants. The Israeli military said early estimates were that around 15 fighters were killed.

Islamic Jihad said Taiseer al-Jabari, its commander for northern Gaza, was killed in the strikes. As mourners prepared to hold funerals for those killed in the attacks, hundreds — some waving Palestinian flags — marched through the streets of Gaza.

The Israeli military said it was targeting Islamic Jihad in an operation named “Breaking Dawn.” It also announced a “special situation” on the home front, with schools closed and limits placed on other activities in communities within 80 kilometers of the border.

Israel had closed roads around Gaza earlier this week and sent reinforcements to the border as it braced for a revenge attack after the arrest of a senior Islamic Jihad leader in the occupied West Bank on Monday.

In a nationally televised speech Friday night, Israeli Prime Minister Yair Lapid said his country had launched the attacks based on “concrete threats.”

“This government has a zero tolerance policy for any attempted attacks — of any kind — from Gaza towards Israeli territory,” Lapid said. He added that “Israel isn’t interested in a broader conflict in Gaza, but will not shy away from one either.”

We have not yet been able to reconstruct what Israel had destroyed a year ago.– Mansour Mohammed-Ahmed, farmer

Islamic Jihad leader Ziad al-Nakhalah, speaking to the al-Mayadeen TV network from Iran, said “we are starting the fight, and the fighters of the Palestinian resistance have to stand together to confront this aggression.”

He said there would be “no red lines” in the confrontation and blamed the violence on Israel.

“The Israeli enemy, who started the escalation against Gaza and committed a new crime, must pay the price and bear full responsibility for it,” said Hamas spokesperson Fawzi Barhoum.

Islamic Jihad is smaller than Hamas but largely shares its ideology. Both groups are opposed to Israel’s existence and have carried out scores of attacks over the years, including the firing of rockets into southern Israel.

No ‘chance to breathe’ since last year’s war

Israel’s most recent war with Hamas in Gaza was in May 2021, and tensions again soared earlier this year following a wave of attacks inside Israel, near-daily military operations in the West Bank and tensions at a flash-point Jerusalem holy site.

“We have not yet been able to reconstruct what Israel had destroyed a year ago. People didn’t have the chance to breathe, and here Israel is attacking again without any reason,” said Mansour Mohammad-Ahmed, 43, a farmer from central Gaza.

Israel and Egypt have maintained a tight blockade over Gaza since the Hamas takeover 15 years ago. Israel says the closure is needed to prevent Hamas from building up its military capabilities, while critics say the policy amounts to collective punishment.

Mohammed Abu Selmia, director of the Shifa hospital, the largest in Gaza, said hospitals faced shortages after Israel imposed a full closure on Gaza earlier this week. He said there were enough supplies and essential drugs to sustain hospitals for five days in normal times but that, with a new round of fighting underway, “they may run out at any moment.”

Earlier on Friday, a few hundred Israelis protested near the Gaza Strip to demand the return of a captive and the remains of two Israeli soldiers held by Hamas.