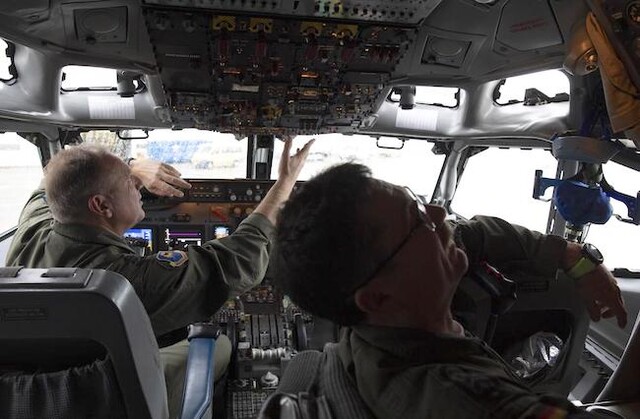 Pilots work in the cockpit of an AWACS plane at Melsbroek military airport in Melsbroek, Belgium.

As Russia’s military buildup near Ukraine accelerated early this year, military planners at NATO began preparing to dispatch scores of fighter jets and surveillance aircraft into the skies near Russia and Ukraine. It was a warning to Moscow not to make the mistake of targeting any member country.

Even in the weeks preceding the war, politicians and analysts were divided over whether President Vladimir Putin would really order Russian troops to invade. From a military point of view, though, the forces arrayed around Ukraine appeared designed to do just that.

It became a matter of urgency to put more eyes in the sky and to tightly link NATO aircraft, warships, ground-based missile systems and radar installations to protect the alliance’s eastern flank.

“We are monitoring very closely,” NATO Secretary-General Jens Stoltenberg said this week. “Information, best possible situation awareness, is of course extremely critical in such a dangerous situation as we see in Ukraine now.”

In the lead-up to the Feb. 24 invasion, the alliance’s Combined Air Operations Center in Uedem, western Germany, shifted gear. A few dozen military personnel now simultaneously manage up to 30 aircraft in skies from the northern tip of Norway down to Slovakia.

From an underground bunker in quiet farmland, patrolling aircraft are diverted to monitor suspicious Russian planes. Jets on 15-minute standby are routinely “Alpha Scrambled” from around Europe to intercept unidentified aircraft near NATO airspace.

More than 100 aircraft can be working aloft on any given day, mixed in among roughly 30,000 civilian flights made daily through European skies.

Six Boeing E-3A surveillance planes from NATO’s aging fleet of early warning and control aircraft help create an “air picture” to share with member nations. These “eyes in the sky” do not fly into Ukraine or Russia, but can see up to 400 kilometers across borders.

Fighter jets also provide information about what is going on inside part of two countries at war. These “assets” are sometimes sent from as far away as western France, refueled mid-air, and can patrol for about an hour in the border area before they must return.

The 30-nation military alliance is wary of being drawn into a wider war with Russia, so borders and airspace are scrupulously respected.

“There is always the fog of war, and we don’t want to have NATO assets close by because even unintentionally you might have some losses,” said Major General Harold Van Pee, commander of the NATO facility in Uedem.

The most sensitive zones for unidentified planes are the Kola Peninsula — at the high north borders of Russia and Norway — the Gulf of Finland approaching the Russian city of St. Petersburg, and the skies around Russia’s exclave of Kaliningrad, sandwiched between Lithuania and Poland.

From their computer screens, NATO personnel can also track cruise missiles, like those that Russia used last month to pound a military training base in western Ukraine near NATO member Poland, killing 35 people.

But shadowing them with aircraft is a high-risk endeavor, particularly at night, in poor weather or when the missiles hug the ground, flying so low that electrical pylons and cables become a danger. “We have to be convinced that there is a credible threat” to go after one, Van Pee said.

Last month, a military drone drifted uncontrolled out of Ukraine through the airspace of three members – Romania, Hungary and Croatia – before crashing in the Croatian capital. Some parked cars were damaged but no one was hurt.

The drone weighed just over 6 tones. Both Russia and Ukraine denied launching it. Military officers and NATO officials refuse to comment on the incident until an investigation is completed.

“Even if you fly alongside one of those drones, are you going to do something about it? You have to ask yourself, because if you shoot it down then for sure you’re going to do damage on the ground. If you let it fly, hopefully it will crash in the sea. I mean, you don’t know,” Van Pee said.

Whether it’s a rogue drone or a missile threat, political and legal experts are supposed to be involved in any decision to shoot something down. Despite the war in its backyard, NATO is operating under strict peacetime rules and is determined to keep it that way.

“Before you start using force there has to be an imminent threat to either NATO forces or NATO populations. That’s a judgment call, and that’s always hard to make,” Van Pee said.