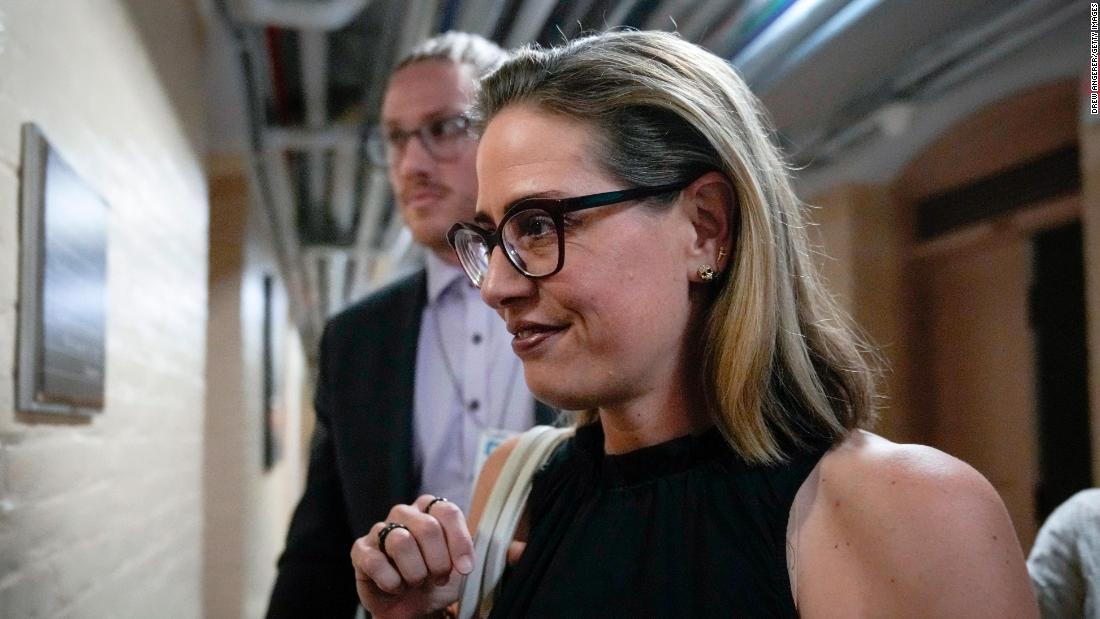 And in a private call with business groups on Tuesday, Sinema asked a question about the bill’s proposed 15% minimum tax on corporations that gave them some hope for optimism.

“Is this written in a way that’s bad?” Sinema asked, according to Danny Seiden, president of the Arizona Chamber of Commerce, who relayed the call to CNN.

“It gave me hope that she’s willing to open this up and maybe make it better,” Seiden said.

Sinema’s office declined to comment about the call. But she has expressed concerns about other tax provisions as well — namely on raising taxes on so-called carried interest, which would impact private equity and hedge fund managers, and raise $14 billion in the Democrats’ bill. Sinema has relayed to top Democrats that she wants that provision out of the bill, according to a source familiar with the matter.

Sinema, the lone holdout among the 50-member Senate Democratic Caucus and who was blindsided by news of the deal last week, has refused to tip her hand one way or the other on the bill — giving conservative critics of the bill reason to believe they could convince her to change her mind. Democrats are still confident that they can win her over but also acknowledge that they may have to make some changes — particularly over the tax provisions — to get her to “yes.”

But as she’s been in talks with Democrats who have touted the bill’s benefits, Republicans like Senate Minority Whip John Thune have expressed concerns to her about the taxes on companies and the proposal to hire new IRS agents to bolster tax enforcement.

“She’s analyzing it,” the South Dakota Republican said of Sinema. “Keeps her own counsel, I think as most of you know, and usually comes to her own decisions, pretty independent of any pressure that she might get from either side. So you know, I think she’s going through that process right now.”

At a news conference on Wednesday, where Republican senators railed against the proposed tax hikes, Idaho Sen. Mike Crapo said senators were privately making the same case to Sinema.

“We are making this case that we’ve made here to you today as aggressively as we can,” Crapo said.

On Wednesday, Sinema indicated to CNN that she was in no hurry to announce her position on the bill. “Taking my time,” she said. Her spokesperson reiterated that Sinema was waiting for the review by the Senate parliamentarian to be completed before announcing her position.

But last fall, Sinema indicated her support for a corporate minimum tax, saying at the time that it’s a “common sense” proposal to ensure that “highly profitable corporations” pay their share of taxes. The proposal was developed last fall with her input after she rejected calls to raise corporate income tax rates, a Democratic aide said Wednesday.

In the private call with Sinema on Tuesday, Seiden expressed the business community’s opposition to the 15% tax provision, noting it would particularly hit manufacturers that take advantage of an accelerated depreciation tax deduction that lowers their tax burden. (Seiden said National Association of Manufacturers president Jay Timmons was also on the call; A NAM representative did not immediately respond to a request for comment.)

Seiden told CNN that Sinema did not “tip her hand” on any particular provision, asked for more information on how the bill affects Arizona, but asked that question, which gave him hope that she would be open to somehow amending the bill’s tax proposals.

In the meantime, she’s hearing arguments from both sides. On the Senate floor Tuesday night, a number of senators from both parties approached the senator, including Senate GOP Leader Mitch McConnell, GOP Sen. Rob Portman of Ohio, Democratic Sen. Patty Murray of Washington state and Democratic Sen. Mark Warner of Virginia.

Democratic leaders acknowledge they are uncertain where she will come down.

“She didn’t tell me or give me any signals as to where she’s going on this bill,” Illinois Sen. Dick Durbin, the Democratic whip, said of a recent conversation he had with the senator. “We need her, we need every single vote, so I hope she’ll be with us.”

While Democrats say the bill would ensure large corporations don’t avoid paying taxes, instilling “fairness” into the tax code, the Arizona Chamber president argued that a minimum corporate tax makes the code “overly complicated.” Seiden said that raising taxes during a recession is particularly unpopular and would inject more uncertainty into the marketplace.

“The meeting went great,” said Seiden of his call with Sinema. “She knows that our businesses are struggling, because of inflation, because of supply chain issues. So anything that will impact or make that worse or halt the economic growth that we’ve seen, she’s very sensitive towards that.”

Seiden thanked Sinema for her work on the bipartisan infrastructure bill and the recent legislation boosting semiconductor manufacturing, but said the “the celebration of the Chips Act is short-lived” if some of the tax provisions remain untouched in the bill negotiated by Senate Majority Leader Chuck Schumer and West Virginia Sen. Joe Manchin.

Seiden said he would like to see some of the energy and environmental pieces go through without the “poison pill” tax provisions, acknowledging that some elements of the energy sector support provisions like the tax credits for electric vehicles. Nikola Corporation and Lucid Group, two electric vehicle manufacturers, have operations in Arizona.

Corporations are hoping that Sinema, the crucial vote in the 50-50 Senate, will make changes to the bill, pointing to her previous statements.

In April, Sinema told the Arizona Chamber of Commerce, “I am unwilling to support any tax policies that would put a break on that type of economic growth, or stall business and personal growth for America’s industries.”

“You all know, the entire country knows, that I am opposed to raising the corporate income tax,” Sinema said. “That was true yesterday and it is true today.”

Sinema already has effectively pushed back on raising personal and corporate tax rates in President Joe Biden’s Build Back Better bill, one reason she is being attacked by the left.

If she doesn’t back the bill, a potential 2024 challenger warned it would come back to haunt her.

“I think there’s going to be some consequences at the ballot box for her,” said Arizona Democratic Rep. Ruben Gallego, who has expressed interest in possibly mounting a primary campaign against Sinema.

John LaBombard, a former Sinema spokesperson, said that Sinema is looking for “good, effective policy that is not going to carry any unintended consequences” and would be “impervious” to political considerations.

This story and headline have been updated with additional developments Wednesday.

CNN’s Jessica Dean and Morgan Rimmer contributed to this report.