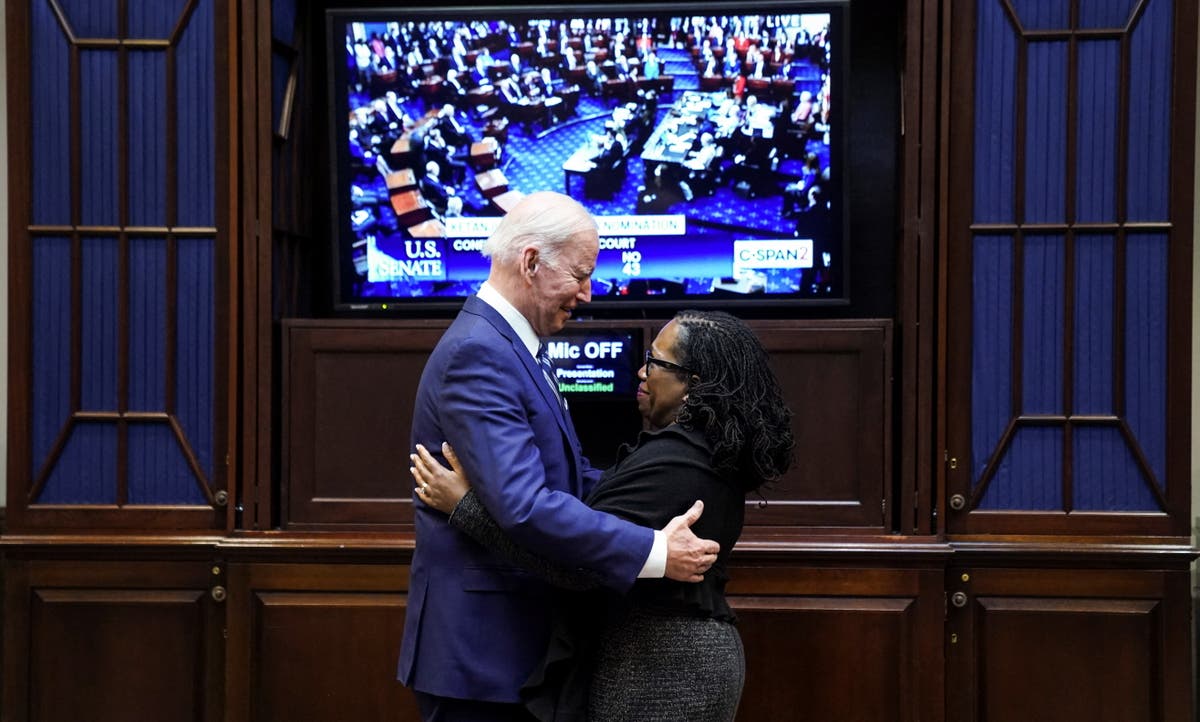 Ketanji Brown Jackson made history on Thursday when the Senate voted 53 to 47 to make her the first Black woman Supreme Court Justice in the country’s history.

Vice president Kamala Harris, herself a historic first as the first Black and Asian American woman vice president, was on hand to preside over the confirmation vote. Ms Jackson’s ascent to the highest court in the land was a moment of celebration for many Democrats.

“Today, the administration of justice at the highest levels in our country looks a little bit more like what it says,” Senator Raphael Warnock of Georgia, one of only three Black Senators who sat in the audience during her confirmation hearing, told The Independent.

JudgeJackson herself watched proceedings alongside President Joe Biden from the White House.

Ms Jackson’s nomination is a fulfillment of President Biden’s pledge during the 2020 campaign that he would nominate a Black woman to the Supreme Court. That in turn led to House Majority Whip James Clyburn endorsing him, which many viewed as the catalyst for him overwhelmingly winning the South Carolina primary that vaulted him to the Democratic nomination for president.

Only three Republican Senators – Mitt Romney of Utah, Susan Collins of Maine and Lisa Murkowski of Alaska – joined every Democrat to vote for her confirmation. Many Republicans on the Senate Judiciary Committee, such as ranking member Chuck Grassley and Senator Lindsey Graham of South Carolina, rehashed hurt feelings about previous confirmations, including of Supreme Court Justice Brett Kavanaugh and failed nominee Robert Bork.

Senate Democrats and supporters of the judge erupted into applause as her confirmation was announced.

“It’s a new member of the Supreme Court and obviously symbolic and significant that we have another African American on the court,” Mr Romney told The Independent.

Senator Amy Klobuchar said that she was confident there would be Republican Senators that would vote for her.

“I’m very proud that three of our Republican colleagues, I was always one that said we would have bipartisan support, are joining us and she handled that hearing so well, she’s going to be able to walk in with her head held high, ” she said.

Others, such as Senators Josh Hawley and Ted Cruz, frequently grilled her about her record sentencing people convicted of possessing child sex images. Those Republicans sought to make her out to be an outlier who gave lenient sentences that diverged from those of other judicial nominees.

Republican Senator Rand Paul of Kentucky further delayed her confirmation by showing up to the vote late even after Ms Jackson’s confirmation reached 53 votes.

But Democrats were largely undeterred and Senator Elizabeth Warren of Massachusetts cast the 51st vote to send Ms Jackson to the court.

“We will not let the Republicans rain on this glorious day,” Ms Warren said. “They couldn’t attack her on her qualifications or her judicial temperament, so they just made up a bunch of stuff. So we’re not going to let a bunch of made up stuff get any of us down.”

Many members of the Congressional Black Caucus on the House side including Val Demings of Florida, Anthony Brown of Maryland, Yvette Clarke of New York and Cori Bush of Missouri were on hand for the event.

For Ms Bush, the moment was a balance of contradictions in America.

“It’s far too long that we’ve had to wait for it,” she told The Independent. “It’s historical, it’s monumental and there are so many Black girls that get to come up and know that ‘I can be that one day.’ But not only that but, you know, I think about the fact that we are celebrating the first Black woman in the year 2022 to the US Supreme Court, the court that affects the entire country, it’s sad that this is the first, but I ‘m elated and I’m emotional so I don’t have very many words.

“That’s what we need, somebody from the ground,” she said. “Somebody that understands that they signed up to work for the people that have the most needs.”

There are currently no Black women serving in the United States Senate. Ms Demings is staging a long-shot run against Senator Marco Rubio this year.

“America has put forth its best in Judge Brown Jackson and we all, regardless of the color of our skin or our gender, should be celebrating this moment,” Ms Demings said. “She will bring, I think a much-needed perspective to the highest court in the land.”

“And when America puts forth its best, I would ask the Senators who treated her like America’s worst to think about if that was their daughter sitting there,” she said. “Putting forth America’s best, would they want their daughter to be treated in such a disrespectful way.”

Mr Warnock, who became the first Black Democrat elected from the South when he won his race in Georgia in January last year, said he was confident there would be Black women Senators in the future.

“We got some excellent Black female candidates,” he said. “I know them both.”