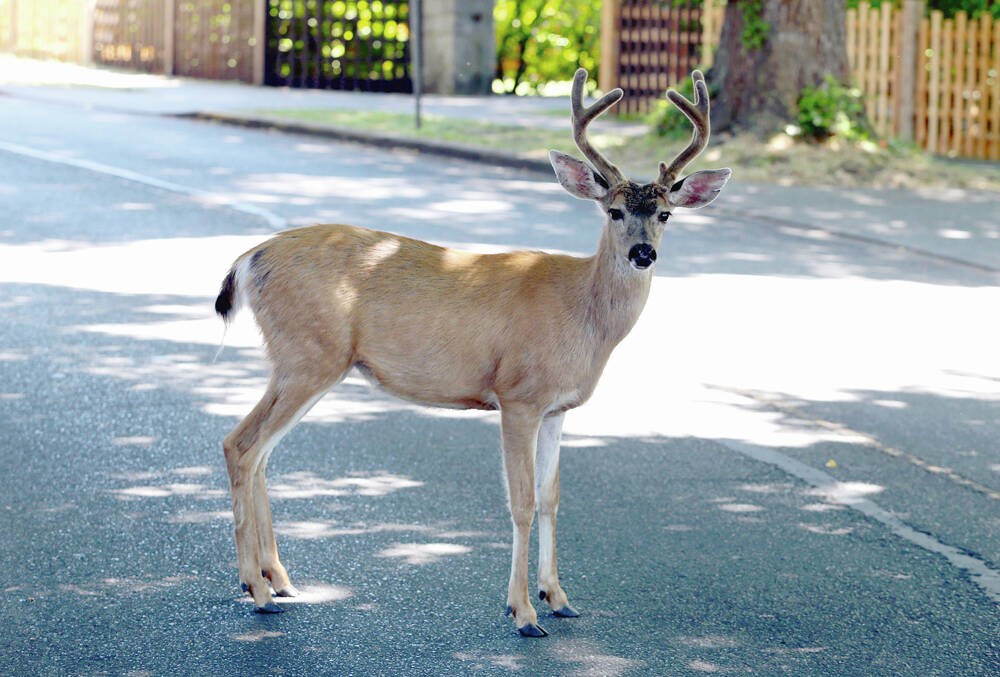 The Canadian Traffic Injury Research Foundation estimates that 25,000 ungulates, usually deer or moose, are struck by cars each year. Total wildlife collisions are estimated at 200,000.

Recently while on the dog walking circuit I couldn’t help noticing way more deer out there than usual — 16 over an hour and a half. This is, of course, nothing new to CRD residents who have lived with the ongoing effects of deer infiltration (or is it invasion) for at least a decade or so.

The other night, though, I spotted one of our local “blacktails” crossing the road in front of me. What I saw was beyond disturbing. The poor creature’s back end was mangled and disfigured to the point it could barely writhe away across the road.

Finding up to date stats on vehicle versus deer collisions within the CRD proved to be a challenge, at least online. The most current report found was written in 2010. Could be wrong, but I’m guessing human population and traffic behavior has changed somewhat around here in the past 12 years.

Hitting animals on our highways seems to be a disturbing Canadian right of passage. The Canadian Traffic Injury Research Foundation estimates that 25,000 ungulates, usually deer or moose, are struck by cars each year. Total wildlife collisions are estimated at 200,000.

The BC Wildlife Collision Prevention Program reports that there are around 9,000 wildlife collisions every year in the province. They believe that number is drastically low, as collisions that don’t involve vehicle damage or human injury are rarely reported. Eighty percent of the reported collisions though, involve deer.

If money is a motivator for some drivers, then it’s worth noting that one major Canadian auto-insurer estimates the cost of animal collisions at roughly $800 million per year.

No matter how alert you are behind the wheel, wildlife is unpredictable and a collision may be unavoidable. But there are measures we can all take to reduce the odds around these events and spare a living creature from the suffering I witnessed the other night.

To start with, being more aware is important. Deer are around all the time but tend to be more active early in the morning or at dusk into the early evening. They are also more active during the mating season of October to January – a period where driver visibility is reduced owing to the onset of winter darkness.

Keeping your windshield clean is always a good practice and is particularly important when trying to discern animals who have genetically evolved a master camouflage system for themselves.

Recognize that deer often travel in numbers. When one emerges onto a roadway, expect more to follow.

Two laned roadways often tend to create driver overconfidence, usually because these stretches of road offer more visibility and room to maneuver. Overconfidence often leads to increasing speed and less attention paid to the driving environment. A laxer driving attitude in a deer populated area can be a deadly combination.

Finally, reduce the ambient light from your dash instruments or other electronics inside your car at night. Bright dash lights can cut outside visibility by several meters — meters you can well use if wildlife pops out in front.

Most experts agree that if a wildlife collision is unavoidable, some crucial actions can make a big difference.

Firstly, brake — don’t swerve. It seems counter-intuitive, but if hitting an animal is unavoidable, then your priority becomes protecting yourself and others on the road.

In swerving out of the way, particularly at highway speeds, you are more apt to lose control of your vehicle, go off the roadway, rollover, crash into barriers or worst of all — hit another vehicle head-on.

Second, if you’ve struck an animal, pull over and stop in a safe spot. Don’t assume that there’s just been little or no damage. Crumpled body panels could now be interfering with your steering control. Front grill, radiator and headlight damage are also quite likely. Worst of all, struck animal may be stuck under your vehicle.

Third, don’t touch or attempt to help an injured animal. They are traumatized, disoriented and will not understand your effort to help them. They will perceive they are still under attack and lash out in any number of ways to survive.

There is no expectation for a citizen to help an injured animal. Your job is to notify the police or BC Conservation and then let professionals take over.

As the population of the lower island continues to swell, wildlife collisions are regrettably going to become even more common. A cautious and alert driving attitude will help to prevent the type of death that no living creature should have to endure.