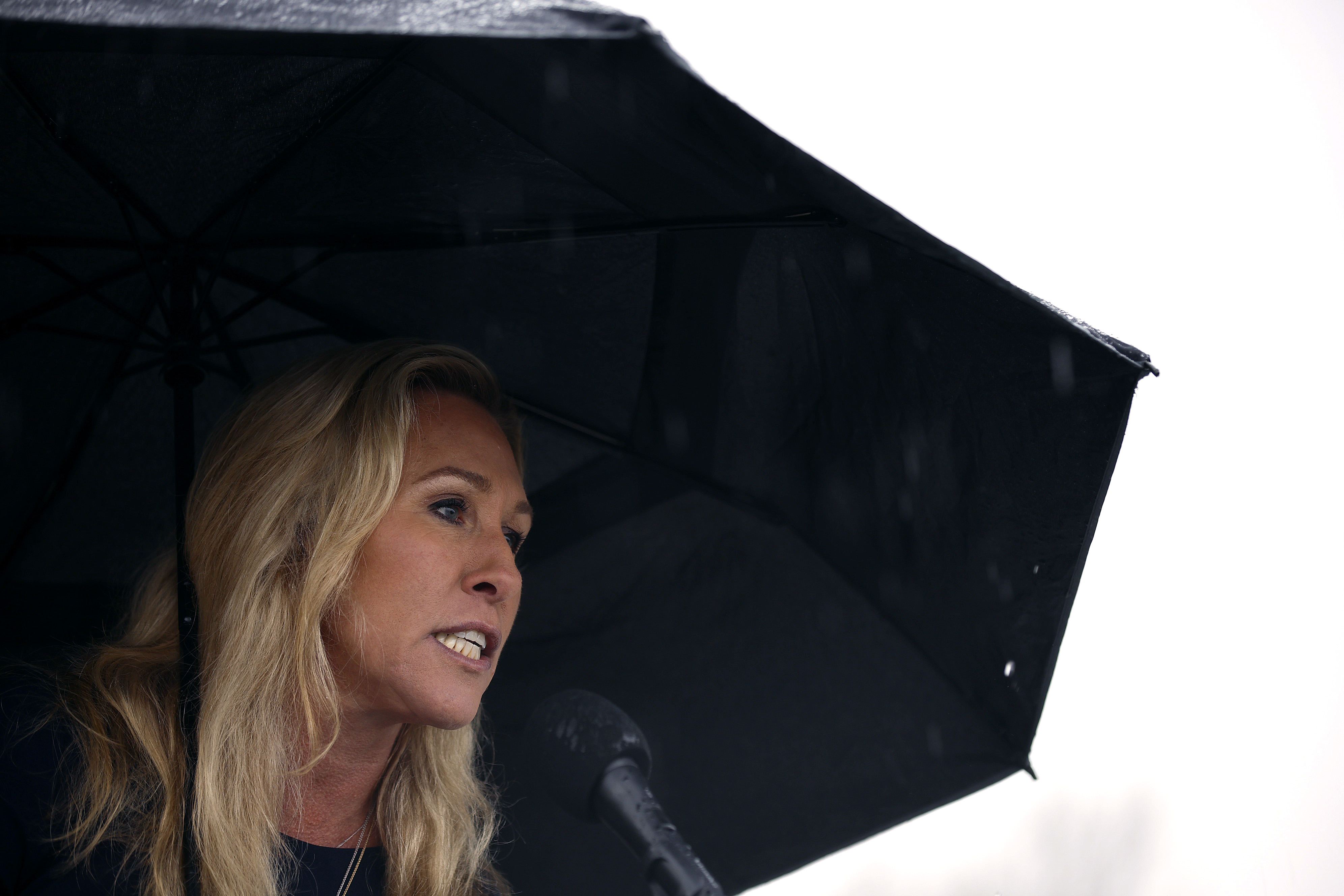 Marjorie Taylor Greene tweeted on Wednesday that she reported Jimmy Kimmel to the Capitol Police for a joke he made at her expense. Kimmel kept going after the conspiracy theorist from Georgia on Thursday night, repeating the joke, calling her a “sociopath” and “snowflake,” and wondering why someone who has called for the death of politicians is suddenly “dialing 911 because she got made fun of.”

“Once again I find myself in the middle of a hubbub, I appear to have run afoul of probably the worst woman in American politics,” Kimmel said before recounting the joke that upset Greene. During his show on Tuesday, Kimmel said, “Where’s Will Smith when you need him?” in response to Greene tweeting earlier this week that the three Republicans who supported Ketanji Brown Jackson’s confirmation to the Supreme Court are “pro-pedophile.”

Greene responded by tweeting that she had reported Kimmel to the Capitol Police, calling the joke a “threat of violence.”

“She called the police and reported this,” Kimmel mused on Thursday. “Not only did she call the police. She called the same police she voted against giving a congressional gold medal to for defending our Capitol against the insurrection she helped incite on Jan. 6. … It’s amazing how quickly you can go from, ‘These liberals, you can’t say anything anymore!’ to, ‘What’d you say? I’m calling the cops.’ It must be that cancel culture they’re always talking about.”

Kimmel then called Greene “triggered” and a “sweet little snowflake” because of a subsequent tweet in which she called the joke a “dog whistle to the violent left” that’s going to result in her getting death threats. “I find it very rich that a person who did this in her campaign ad,” Kimmel said while showing an image of Greene wielding an assault rifle, “is suddenly whining about fantasies of violence. This woman is the one who endorsed fringe conspiracy theories and repeatedly indicated support for executing prominent Democratic politicians. Now, she’s dialing 911 because she got made fun of. She’s a snowflake and a sociopath at the same time — a snowciopath.”

You weren’t joking. You hide your misogyny and your racism behind your “jokes” on @ABC.

This was a dog whistle to the violent left to assault me ​​or worse, and your already inspiring fantasies of violence against me.

How many new death threats will I get that are your fans? https://t.co/SB37BqnxyJ

Greene later tweeted what she claims is audio of violent threats she and her office have fielded since Kimmel’s “call for violence.”

Greene’s support for fringe conspiracy theories is well documented, as Kimmel noted, and she has indeed called for the death of prominent Democratic politicians, as Andrew Kaczynski of CNN reminded his Twitter followers on Thursday.

Marjorie Greene’s deleted FB video where she suggests Pelosi be executed for treason is getting a new look after saying she filed a police report over a Jimmy Kimmel joke.

“It’s a crime punishable by death is what treason is. Pelosi is guilty of treason.”pic.twitter.com/cUVT4AUPBW

“I feel like maybe other Republicans like having her around to make the rest of them seem normal,” Kimmel added.

Greene has at least one supporter in Rep. Matt Gaetz (R-Fla.). “Not only would Marjorie Taylor Greene’s husband make quick work of you, but @RepMTG herself would make quick work of you!” wrote the congressman currently under investigation for sex trafficking a minor. “Kimmel would not last too long if he were interested in engaging in unprovoked, terrible violence against this Congresswoman.”