India suffered an outbreak of mucormycosis in April 2021 when the country was witnessing a peak in COVID-19 cases. Now, a research paper published in the US states that cow dung fires could have been the driving force behind the black fungus pandemic 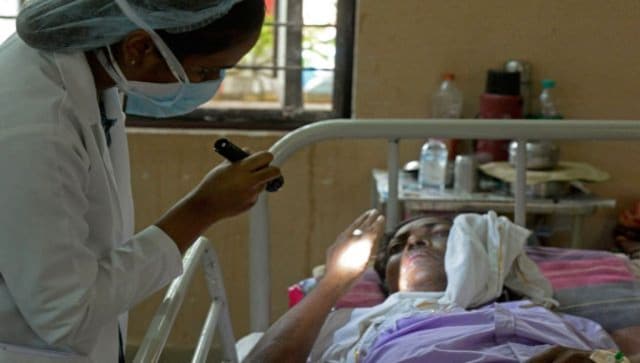 Health Minister Mansukh Mandaviya had said that a total of 51,775 cases of mucormycosis had been reported till 29 November 2021. AFP

In mid-2021, doctors across India were battling a twin epidemic — coronavirus and mucormycosis, also popularly known as Black Fungus.

Health Minister Mansukh Mandaviya had said that a total of 51,775 cases of mucormycosis had been reported till 29 November 2021.

Now, a year later, a study published April in mBio, a journal of the American Society for Microbiology has hypothesized that cow dung fires, could be the reason behind the mucormycosis epidemic.

Here’s what we know so far.

As per the US Centers for Disease Control and Prevention, this is a rare fungal infection caused by a group of molds known as mucormycetes. This mucor mold is commonly found in soil, plants, manure, and decaying fruits and vegetables.

It affects the sinuses, the brain and the lungs and can be life-threatening in diabetic or severely immuno-compromised individuals, such as cancer patients or people with HIV/AIDS.

The symptoms of black fungus/mucormycosis are pain/stuffiness in the nose, inflammation on cheeks, fungus patch inside the mouth and swelling in the eyelids.

Also read: Black fungus: From symptoms to causes of infection, here are key facts about the disease

Andhra Pradesh, Telangana, Gujarat, Haryana, Karnataka, Madhya Pradesh, Rajasthan, and Maharashtra were among the states, which were highly affected by black fungus infections.

When a rise in black fungus cases was noted in 2021, doctors had then opined that it could be triggered by the use of steroids, a life-saving treatment for severe and critically ill COVID-19 patients.

Another reason for the rise in black fungus cases in 2021 was attributed to the unhygienic way of delivering oxygen to patients.

As per the CDC, black fungus is treated with antifungal medicines, often given intravenously. Often, surgery is required to cut away dead or infected tissue.

“In some patients, this may result in loss of upper jaw or sometimes even the eye,” the Union health ministry had said.

What the new study says

The new paper — authored by Houston-based independent researcher Jessy Skaria, among others — states, “Mucorales-rich cow excrement, given its use in multiple Indian rituals and practices, especially during the pandemic, probably played a key role in India’s Covid- 19-associated mucormycosis epidemic”.

Skaria told SciDev.Net that they looked at unique local causes in India that could increase exposure to Mucorales spores, such as through fumes from burning cow dung.
“Increased fungal spore burden in the Indian environment has been demonstrated in a recent multi-center study which showed the burden of Mucorales in areas close to hospitals to be as high as 51.8 per cent.”

She explained that fungal spores disperse widely through the smoke of burning biomass, so the practice of burning Mucorales-rich cow dung and crop stubble to dispose of it may lead to Mucorales spores being released into the environment.

She added that her research had shown that in states like Kerala and West Bengal, where cow dung is rarely used as fuel in homes and the slaughtering of cattle is not banned, the number of mucormycosis cases was far fewer. Cow dung is widely used in India for various reasons. There’s also the Gore Habba’ festival, where people throw and smear each other with cow dung in a village near Bengaluru. AFP

Cow dung use in India

The use of cow dung in the country is spread far and wide, across several applications. There’s also the Gorehabba festival, celebrated at the end of Diwali, in which people pelt each other with fistfuls of cow manure

In the peak of the coronavirus pandemic, several people across the country began covering their bodies in cow dung and urine in the hope it would boost their immunity against, or help them recover from, COVID-19.

In Ahmedabad, some believers started visiting cow shelters once a week and covering themselves in cow dung.

Doctors had then warning against the practice, saying there was no scientific evidence for its effectiveness and that it risks spreading other diseases.

Dr JA Jayalal, national president at the Indian Medical Association, was quoted by news agency Reutersas saying, “There is no concrete scientific evidence that cow dung or urine work to boost immunity against COVID-19, it is based entirely on belief.”

“There are also health risks involved in smearing or consuming these products – other diseases can spread from the animal to humans.”

With inputs from agencies