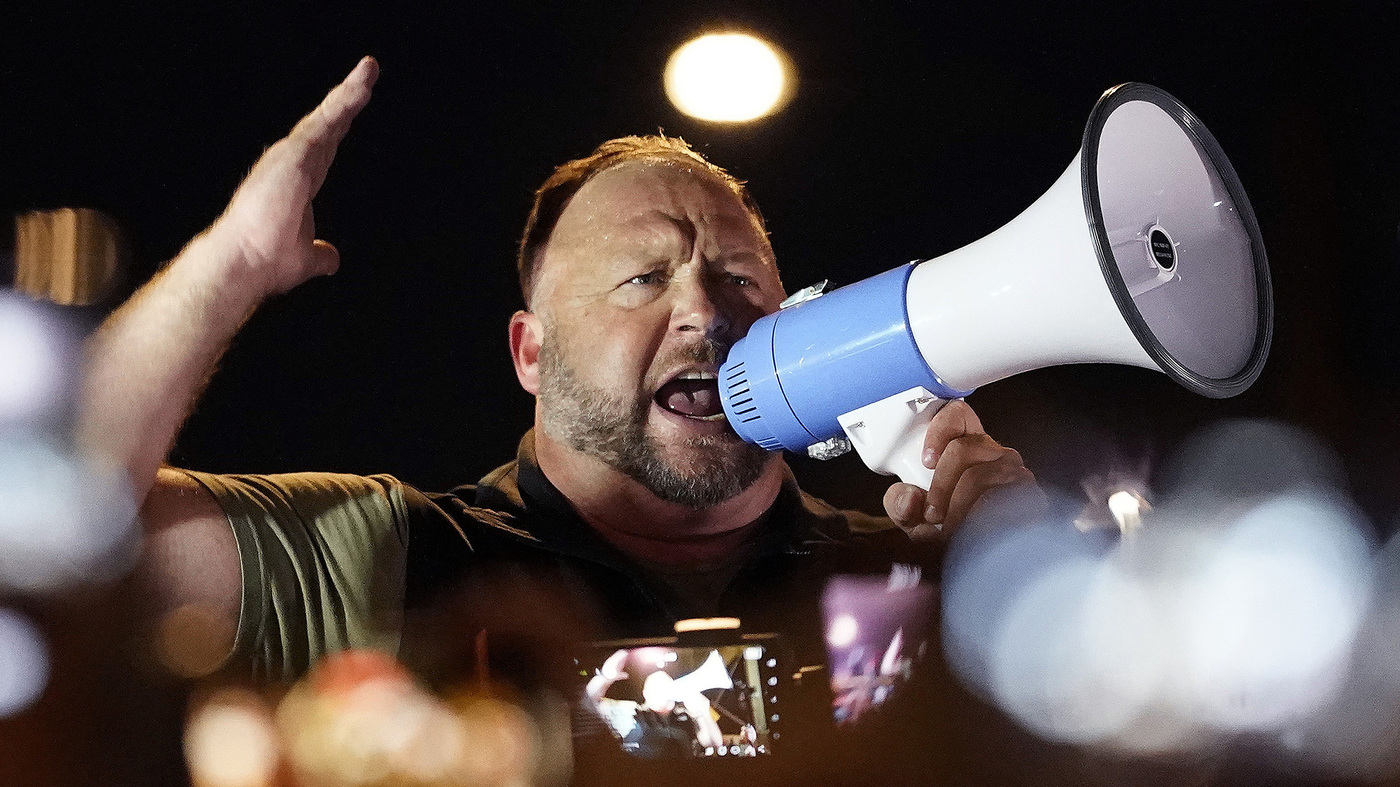 A jury has ordered conspiracy theorist Alex Jones to pay millions of dollars for spreading lies about the Sandy Hook school massacre. But his influence in right-wing media and politics remains strong.

A jury has ordered conspiracy theorist Alex Jones to pay millions of dollars for spreading lies about the Sandy Hook school massacre. But his influence in right-wing media and politics remains strong.

Name a traumatic news event in recent decades, and it’s almost certain Alex Jones has claimed it didn’t happen — or not the way you think it did.

The Boston Marathon bombing in 2013? Staged by the FBI.

The shooting of Arizona congresswoman Gabby Giffords in 2011? A government mind control operation.

The September 11th terrorist attacks? An inside job.

The conspiracy theorist and radio host was confronted with his track record of fabulism this week in an Austin, Texas, courtroom. He was on trial to determine how much he should pay for defaming the parents of a first grader killed at Sandy Hook Elementary School in 2012, after years of falsely claiming that no children died and the families were “crisis actors” in a “giant hoax “designed to take away guns.

“Would you agree with me that there is not a mass tragedy, mass bombing, mass shooting that has occurred in America in the past 15 years that you have not attached the words ‘false flag’ to?” Mark Bankston, the parents’ attorney, asked Jones.

“I have asked the question because I believe a lot of things are provocative or allowed to happen,” Jones replied.

The jury ordered Jones to pay $49.3 million in damages to Scarlett Lewis and Neil Heslin, the parents of 6-year-old Jesse Lewis, for the mental anguish caused by his lies about Sandy Hook.

Jones has a history of prolific fabulism

Jones got his start in public access broadcasting in Austin, Texas, in the 1990s. From his early days on air, he spouted conspiracy theories about the siege of the Branch Davidian compound in Waco, Texas, and the bombing of the Alfred P. Murrah Federal Building in Oklahoma City.

When his wild claims got him fired from a local radio station, he founded Infowars in 1999 and started broadcasting over the internet and in radio syndication.

After the September 11th attacks, Jones surged to fame as a “truther,” claiming the Bush administration was behind the tragedy.

As his audience grew, Jones popularized a vocabulary for pernicious doubt: not just that officials and media are hiding the truth, but that tragic events are being engineered for nefarious purposes.

“He’s at least a catalyst of those prevailing narratives that follow almost every newsworthy tragedy, whether it’s a mass shooting or otherwise,” said Sara Aniano, a disinformation researcher at the Anti-Defamation League.

Jones’s response to Sandy Hook was perhaps the most egregious example. For years, Infowars aired falsehoods that the tragedy was invented and implied the families of the murdered children were lying.

That created a template to cast doubt on subsequent mass shootings.

“A lot of people who share these theories that those were staged by the government for gun control reasons or that the children and parents are crisis actors will reference Sandy Hook as the basis of that conclusion,” Aniano said.

The lies on Infowars had real-world consequences.

At the trial, Lewis and Heslin tested about the harassment and death threats they’ve received from people who believe Jones.

“When you say those things, there’s a fringe of society that believe you, that are actually dangerous,” Lewis said in emotional testimony addressed directly to Jones.

Infowars doesn’t just disseminate harmful lies; it profits from them.

According to a forensic economist called by the parents’ lawyers, Infowars’ parent company raked in $64 million in sales of supplements, survivalist gear and other products last year.

The plaintiffs also presented evidence from Jones’s own cell phone showing in 2018, Infowars was making as much as $800,000 a day.

The combined net worth of Jones and Infowars is between $135 million and $270 million, the economist estimated.

Jones is not the first person to grift off conspiracy theories, but Infowars harnessed the power of the internet to do so on a massive scale — a model that’s been imitated by anti-vaccine advocates, COVID-19 deniers and champions of baseless claims that former President Donald Trump won the 2020 election.

“You preach apocalypse and then you sell stuff that can help you in an apocalypse,” said Yunkang Yang, a communications professor at Texas A&M.

Jones inside the Georgia State Capitol during a “Stop the Steal” rally against the results of the US presidential election on Nov. 18, 2020 in Atlanta, Ga.

Jones inside the Georgia State Capitol during a “Stop the Steal” rally against the results of the US presidential election on Nov. 18, 2020 in Atlanta, Ga.

Jones has also left a mark on conservative politics.

When Barack Obama was president, Infowars and Donald Trump both promoted the racist lie that he was not an American citizen.

Infowars was also a big spreader of the Pizzagate conspiracy theory, which falsely accused Hillary Clinton and other Democrats of running a child sex trafficking ring out of a Washington, DC pizzeria. Days after Jones urged his audience to investigate, a man, who told the New York Times he listened to Jones’s radio show, entered the restaurant and fired a rifle. (Jones later apologized to the restaurant owner for promoting the lie.)

In late 2015, ahead of Republican primaries, Trump called into Infowars for a mutually fawning interview with Jones.

Trump “gave those folks who are conspiracy theorists signals that he was their guy and they had a candidate who was a conspiracy theorist for the first time,” said Melissa Ryan, CEO of consulting firm CARD Strategies, which tracks disinformation and extremism.

“Trump won by being willing to appeal to this base of supporters that other people in the party would have kept at arm’s length,” she said, “lest they be called out for having extremist views.”

The early years of Trump’s presidency may have been the peak of Jones’ mainstream influence. By 2018, pressure mounted on tech companies to crack down on hate speech and harmful falsehoods. Jones and Infowars were kicked off Facebook, YouTube, Twitter and Apple’s app store.

That curbed his ability to reach a wider audience, but according to evidence presented in court, he’s still making plenty of money. The forensic economist called by the plaintiffs said Jones’s deplatforming has not dented his revenues.

Now, Jones and Infowars are facing multiple trials that could put them on the hook for further damages to the victims of his lies.

Jones is trying to shield his assets through bankruptcy, but has vowed to keep Infowars alive.

But even if Jones were to go silent and Infowars went out of business tomorrow, the seeds of doubt he so effectively planted are flourishing.

“Conspiracy is a permanent part of our political and cultural discourse now,” Ryan said. “I think you can say that Alex Jones was an innovator in that.”