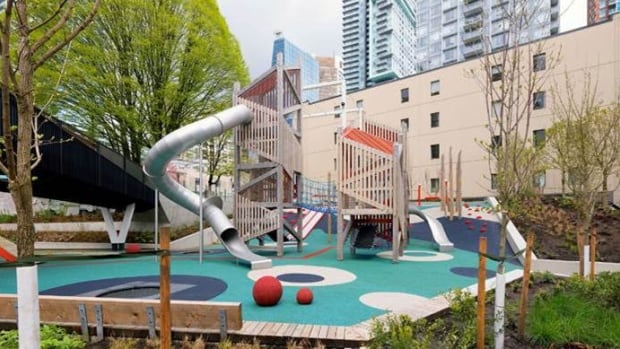 Vancouver’s latest park is ready for visitors and builders say its unique features will not only offer up recreational space, but also create opportunities for Vancouverites to gather and connect.

“It’s a symbol of connection to one another, to the land, and an opportunity to build further collaboration with the host nations for education, programming and artwork,” park board chair Stuart Mackinnon said in a statement.

The Smithe-Richards Park, at the corner of — you guessed it — Smithe and Richards Streets, is the first park in the city’s downtown core in more than 10 years. That name won’t stick though, according to project manager Alexandre Man-Bourdon, and there are plans to give it a more official, culturally appropriate title this summer.

About one-third of the park is playground space and features two in-ground trampolines, towers and other climbing apparatus and a disc swing. There are hammocks and seating for those not feeling quite as adventurous and six “skyframes” that will be used to display public art on a rotating basis.

Here’s the trip down the slide. pic.twitter.com/KnMy2XkBoy

Man-Bourdon says they used the design of the park to prevent crime in the area. For example, a coffee vendor will be set up to keep an eye on the area.

“Ultimately, that’s what we want, is everyone that comes to the park feels safe and has a great experience,” he told CBC’s Margaret Gallagher during a tour of the space.

There was also a focus on greenery and sustainability for the park. A third of the 0.8 acre space is covered with thousands of shrubs and other plants, many of which the city says are culturally significant for First Nations and often used in food and medicine.

Rain water collected in the park will be sent back into the city’s water system to be used for irrigation, flushing toilets or cleaned before entering the storm sewers.

Ramps have been installed for accessibility and the playground has rubber surfacing to help absorb shock and prevent slipping.

“This park demonstrates how to deliver access to nature, leisure, health and community connection in a dense urban setting,” director of planning and park development Dave Hutch said in a statement.

“This is a place where people can live, work, socialize and play in their neighborhood. It’s about building community, creating complete neighborhoods, and we cannot wait for people to enjoy a whole new take on what a downtown park can be.”

The park will be open to the public Friday afternoon.

On The Coast7:16Vancouver’s Newest Park

CBC’s Margaret Gallagher takes you inside Vancouver’s newest downtown park located at Smithe and Richards. Its features include a high tech bridge and a giant slide. 7:16