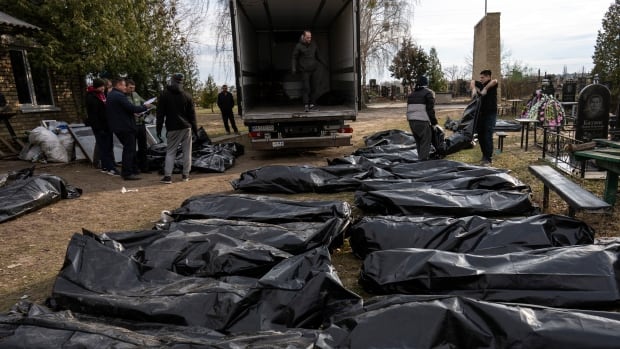 The German government has indications that Russia was involved in the killing of civilians in the Ukrainian town of Bucha based on satellite images, a security source said on Thursday.

“It’s true that the federal government has indications of Russian perpetration in Bucha,” said the source.

“However, these findings on Bucha refer to satellite images. The radio transmissions cannot be clearly assigned to Bucha.”

The source did not elaborate. He said there was no indication of an order from the Russian armed forces’ general staff regarding Bucha.

The Associated Press reported that in one radio message, a Russian soldier informs another how he and others shot dead a person on a bicycle. In another message, a speaker allegedly recounts how the Russian military interrogated enemy soldiers before killing them.

Bucha, about 40 kilometers northwest of Kyiv, was occupied by Russian troops for more than a month following their Feb. 24 invasion of Ukraine. Ukrainian officials said earlier this week that the bodies of 410 civilians were found in towns around the capital city. Volunteers have spent days collecting the corpses, and more were picked up Thursday in Bucha.

Ukrainian Foreign Minister Dmytro Kuleba warned Thursday that despite a recent Russian pullback, the invasion is not over, and pleaded for “weapons, weapons and weapons” from NATO to face down the coming offensive in the east. Nations from the Western alliance agreed to increase their supply of arms, spurred on by reports of atrocities by Russian forces in areas surrounding Kyiv.

Western allies also ramped up financial penalties aimed at Moscow on Thursday, including a ban by the European Union on Russian coal imports.

Kuleba encouraged Western countries to continue bearing down on Russia, suggesting that any let up will ultimately result in more suffering for Ukrainians.

“How many Buchas have to take place for you to impose sanctions?” Kuleba asked reporters Thursday.

“How many children, women, men have to die — innocent lives have to be lost — for you to understand that you cannot allow sanctions fatigue, as we cannot allow fighting fatigue?”

Bucha Mayor Anatoly Fedoruk said investigators have found at least three sites of mass shootings of civilians during the Russian occupation. Most victims died from gunshots, not from shelling, he said, and corpses with their hands tied were “dumped like firewood” into recently discovered mass graves, including one at a children’s camp.

The mayor said the count of dead civilians stood at 320 as of Wednesday, but he expected the number to rise as more bodies are found in his city, which once had a population of 50,000. Only 3,700 now remain, he said.

WATCH | Bucha’s mayor speaks of the atrocities in his city:

In his nightly address, Ukrainian President Volodymyr Zelensky suggested that the horrors of Bucha could just be the beginning. He warned that in the northern city of Borodianka, just 30 kilometers northwest of Bucha, “it is much scarier.”

“There on every street is what the world saw in Bucha and other towns in the Kyiv region after the departure of the Russian troops,” he said. “The same cruelty. The same terrible crimes.”

He pledged that an international war crimes investigation already underway will identify “each of the executioners” and “all those who committed rape or looting.”

WATCH | What one reporter saw in Borodyanka:

“It may be even worse than Bucha,” says Sara Gomez, after visiting both towns. The correspondent for EFE Noticias talked with CBC News Network about what she saw and heard. 4:15

Ukrainian and several Western leaders have blamed the massacres on Moscow’s troops. Russia has falsely claimed that the scenes in Bucha were staged.

Spiegel said the German intelligence agency, the Bundesnachrichtendiensthad intercepted the radio messages and presented the findings in parliament on Wednesday, without giving a source for the information.

Spiegel also said there were additional sound recordings whose physical origin was harder to pinpoint, which he said suggested similar events had occurred in other Ukrainian cities.

Kuleba became emotional while referring to the horrors in Bucha, telling reporters that they couldn’t understand “how it feels after seeing pictures from the town, talking to people who escaped.”

His comments came in response to a reporter’s question about a video that allegedly surfaced showing Ukrainian soldiers shooting a captured and wounded Russian soldier. Kuleba said he had not seen the video but that he would be investigated and acknowledged that there could be “isolated incidents” of violations.

The video has not been independently verified by The Associated Press but was verified by the New York Times visual investigations team.

Ukrainian President Volodymyr Zelensky visited Bucha, a town near Kyiv Monday, where an unknown number of people were killed during the Russian invasion, some of whom appear to have been shot at close range. 5:49

Zelensky has accused Russia of genocide and war crimes. The Kremlin said on Tuesday that Western allegations Russian forces executed civilians in Bucha are a “monstrous forgery” meant to discredit the Russian army and justify new Western sanctions.

Russia casts the evidence of civilian executions as a cynical ploy by Ukraine and its Western backers, who Moscow says are gripped by discriminatory anti-Russian paranoia.