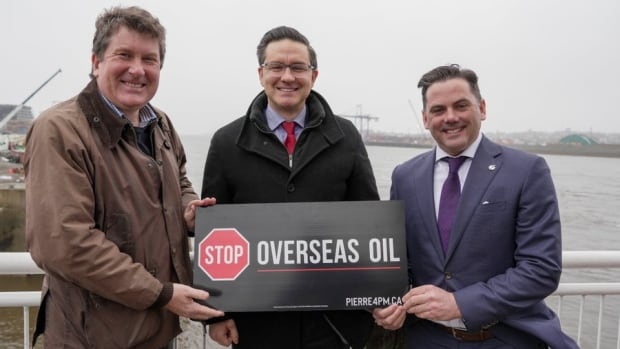 In recent weeks, several leading Conservative politicians have spoken in favor of telling private-sector energy and resource companies in New Brunswick what’s good for them.

And Premier Blaine Higgs says global potash supplier Nutrien should open its Sussex-area mine, even if Nutrien itself says it has no such plans.

“It is explicitly government involving itself in what are normally private economic decisions,” says University of Calgary economist Trevor Tombe, who studies international trade and energy markets.

“The inconsistency between Mr. Poilievre’s strong rhetoric around freedom and his command-and-control energy policies is interesting.”

Louise Comeau, the director of climate change and energy solutions for the Conservation Council of New Brunswick, calls the rhetoric from champions of small government “truly bizarre.”

“If these ideas were coming from the NDP or the Liberals we would be in a world where the socialists and the communists want to take over.”

In March, Poilievre used a stop in Saint John to unveil his vow to ban “dictator oil” and other foreign crude from being refined in Canada.

“We see those tankers pulling up,” he said. “Tanker after tanker of oil from the Middle East comes here to Canada.”

Oil from Saudi Arabia has been a large share of what Irving Oil processes at its Saint John refinery since it opened in 1960.

In 2016, Irving said it would probably keep buying Saudi oil even if the Energy East pipeline were built from Alberta, because Saudi oil is cheaper.

Poilievre argues companies like Irving should use “clean and ethical” Canadian oil rather than crude from authoritarian countries with weak environmental rules.

He’d ban foreign supplies within five years of becoming prime minister and says he’d increase production of Canadian oil to make up the difference and more.

But Tombe says free enterprise is also why prairie oil producers have historically shipped their heavy oil to the US while eastern refineries have imported lighter crude from overseas: it makes better business sense.

“That’s a market decision,” he said, comparing it to Canada building and exporting some kinds of cars at the same time it imports others.

Irving Oil did not respond to a request for comment.

Tombe says one possible explanation for the interventionist rhetoric is the type of conservatism in vogue today.

“Populism in general is characterized by a rejection and distrust of institutions, which for many may include markets,” he said.

Charest wasn’t as aggressive as Poilievre during his leadership campaign swing through New Brunswick this week but said his climate change plan includes “a willingness to convert this LNG terminal [in Saint John] into one that can export.”

That’s been on the table for some time, but owner Respol hasn’t made any decisions.

The company said in March it was “exploring options to maximize the value of the terminal” in light of the need for more natural gas in Europe due to Russian’s war on Ukraine.

But that too would be dependent on market conditions.

Charest acknowledged a prime minister can’t convert a gas facility but said Ottawa “sends signals on these projects. We have to create the environment in which the natural gas will get to the terminal.

“And all of the issues surround regulation and pricing are things in which we are involved directly or indirectly, so we have a key role.”

Meanwhile, the war’s disruption of Russia’s global potash supply has convinced Higgs that Saskatoon-based Nutrien should restart its Sussex mine, which it closed in 2016.

“The opportunity is real for this mine to reopen,” the first said in an interview.

The company says however that so far, the global supply squeeze only warrants ramping up its lower-cost production in Saskatchewan.

“We have no plans at this time to expand our New Brunswick mine,” spokesperson BJ Arnold said in an email Thursday.

Higgs says the mine here makes sense because potash prices are higher and Nutrien is paying more on fuel costs to move its Saskatchewan product by rail to the port of Saint John for export.

Plus, he said, Nutrien could supply markets now refusing to buy Russian potash, while the Russian supply may displace the company’s sales in places like China and India.

“There could be a rebalance of the supply chain,” Higgs said.

“We won’t comment on speculation, only the facts in our statement,” Arnold said.

In February, interim Nutrien CEO Ken Seitz told The Financial Post the company could not spend “all kinds of money staffing and opening up ground” based on supply shortages and a war that may not last long.

Tombe says private companies have to forecast what markets will look like in the 2030s or 2040s before spending big money on a mine or gas terminal.

“I do worry that the decisions made by governments in this case would be of a short-term nature aiming at the near-term electoral cycle,” he says.

Higgs agrees that businesses need to plan decades ahead “under normal conditions.”

But he says the Ukraine war requires Canada to come up with “a whole new energy security model” that would make domestic resources a safe bet for the long term.

Grave however says nothing is guaranteed.

“For the best private players, you don’t have any guarantee of where things are going to go with any guarantee or precision, and that’s doubly true for governments who have non-economic objectives in mind.”