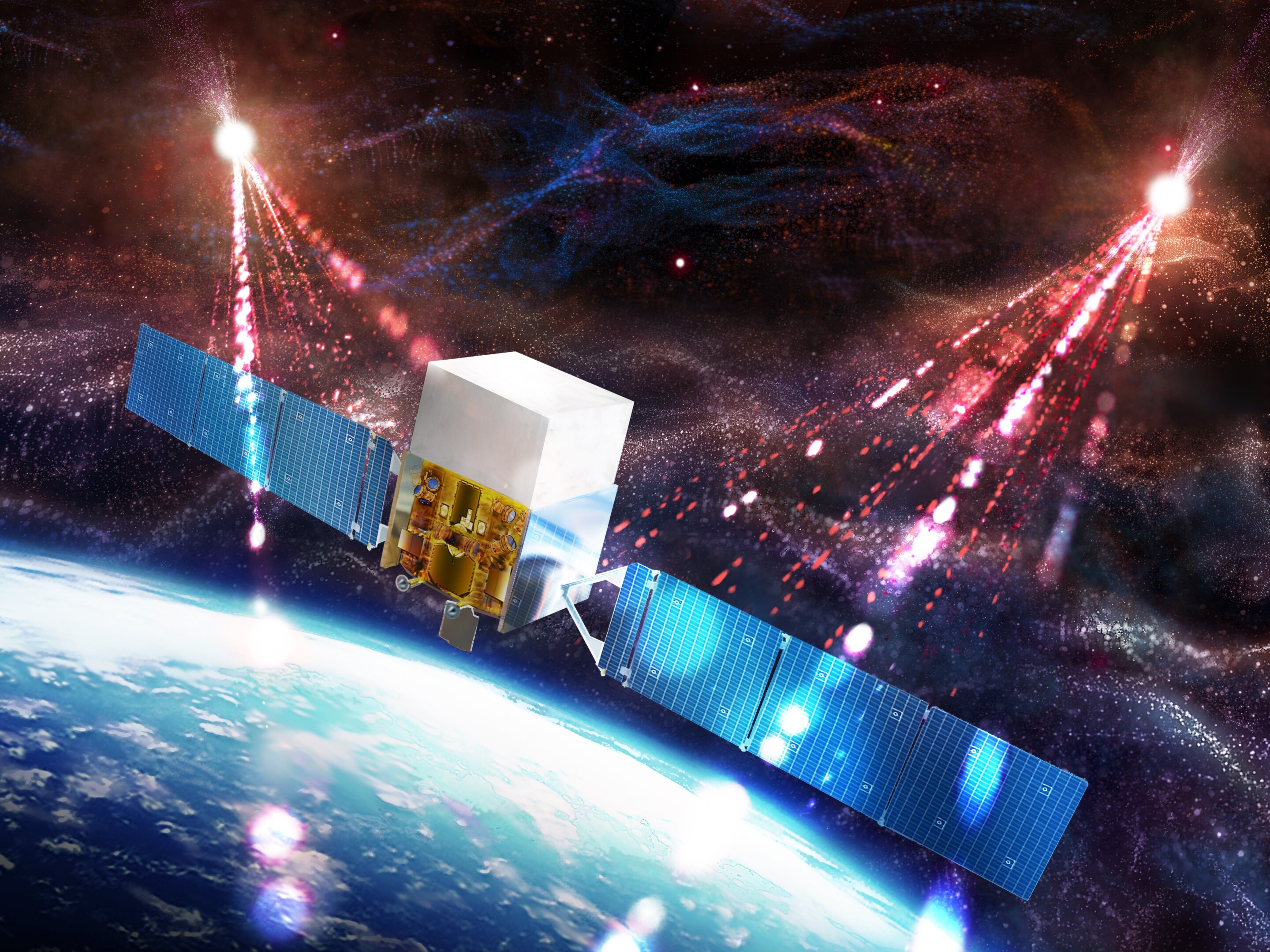 Coalescing supermassive black holes in the centers of merging galaxies fill the universe with low-frequency gravitational waves. Astronomers have been searching for these waves by using large radio telescopes to look for the subtle effect these spacetime ripples have on radio waves emitted by pulsars within our galaxy. Now, an international team of scientists has shown that the high-energy light collected by NASA’s Fermi Gamma-ray Space Telescope can also be used in the search. Using gamma rays instead of radio waves yields a clearer view to the pulsars and provides an independent and complementary way to detect gravitational waves.

The findings of an international team of scientists including Aditya Parthasarathy and Michael Kramer from the Max Planck Institute of Radio Astronomy in Bonn, Germany, are published in Science this week.

A sea of ​​gravitational waves

At the heart of most galaxies—collections of hundreds of billions of stars like our own Milky Way—lies a supermassive black hole. Galaxies are drawn to each other by their immense gravitation, and when they merge their black holes sink to the new center. As the black holes spiral inward and coalesce, they create long gravitational waves that stretch out hundreds of trillions of kilometers between wave crests. The universe is full of such merging supermassive black holes, and they fill it with a sea of ​​low-frequency spacetime ripples.

Astronomers have been searching for these waves for decades by observing the pulses from pulsars, the dense remnants of massive stars. Pulsars rotate with extreme regularity and astronomers know exactly when to expect each pulse. The sea of ​​gravitational waves, however, subtly alters when the pulses arrive at the earth, and precisely monitoring many pulsars across the sky can reveal its presence. Previous searches for these waves have exclusively used large radio telescopes, which collect and analyze radio waves. But now an international team of scientists has looked for these minute variations in more than ten years of data collected with NASA’s Fermi Gamma-ray Space Telescope, and their analysis shows that detecting these waves may be possible with just a few years of additional observations.

“Fermi studies the universe in gamma rays, the most energetic form of light. We’ve been surprised at how good it is at finding the types of pulsars we need to look for these gravitational waves—over 100 so far,” said Matthew Kerr , a research physicist at the US Naval Research Laboratory in Washington. “Fermi and gamma rays have some special characteristics that together make them a very powerful tool in this investigation.”

The results of the study, co-led by Kerr and Aditya Parthasarathy, a researcher at the Max Planck Institute for Radio Astronomy (MPIfR) in Bonn, Germany, were published in the April 07 issue of Science.

It is impossible to build a detector large enough to detect the trillion-kilometer waves powered by merging supermassive black holes, so astronomers use naturally-occurring detectors called pulsar timing arrays. These are collections of millisecond pulsars that shine in both radio waves and gamma rays and which rotate hundreds of times each second. Like lighthouses, these beams of radiation appear to pulse regularly as they sweep over the earth, and as they pass through the sea of ​​gravitational waves they are imprinted with the faint rumble of distant, massive black holes.

Pulsars were originally discovered using radio telescopes, and pulsar timing array experiments with radio telescopes have been operating for nearly two decades. These big dishes provide the most sensitivity to the effects of gravitational waves, but interstellar effects complicate the analysis of radio data. Space is mostly empty, but in crossing the vast distance between a pulsar and the earth, radio waves still encounter many electrons. Similar to the way a prism bends visible light, interstellar electrons bend the radio waves and alter their arrival time. The energetic gamma rays aren’t affected in this way, so they provide a complementary and independent method of pulsar timing.

“The Fermi results are already 30% as good as the radio pulsar timing arrays when it comes to potentially detecting the gravitational wave background,” Parthasarathy said. “With another five years of pulsar data collection and analysis, it’ll be equally capable with the added bonus of not having to worry about all those stray electrons.”

A gamma-ray pulsar timing array, not envisioned before the launch of Fermi, represents a powerful new capability in gravitational wave astrophysics.

“Detecting the gravitational wave background with pulsars is within reach but remains difficult. An independent method, shown here unexpectedly through Fermi is great news, both for confirming future findings and in demonstrating its synergies with radio experiments,” concludes Michael Kramer, a director at the MPIfR and head of its Fundamental Physics in Radio Astronomy research department.