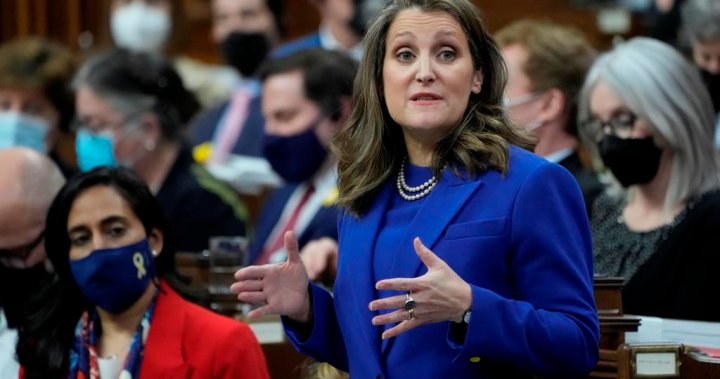 Both housing experts and the BC government are applauding housing investments from the federal government, but are questioning the measures’ overall impact.

Finance Minister Chrystia Freeland unveiled a budget on Thursday with $10.14 billion of housing spending over the next five years.

The plan includes a plan to double the pace of homebuilding in Canada over the next decade.

2:06
Rising interest rates could put pressure on BC home buyers in an already challenging market

“There is a lot of work we have to do now, that is where the housing part of this budget is very much focused,” Freeland said in an interview with Global National host Dawna Friesen.

The 2022 budget includes plans to create a new Tax-Free First Home Savings Account (TFFHSA) with a maximum of $40,000 per person towards the purchase of a first home.

The budget also includes hints of a proposal to set aside $475 million in the next fiscal year to provide a one-time payment of $500 “to those facing housing affordability challenges.”

5:57
What does the 2022 federal budget mean for British Columbians?

What does the 2022 federal budget mean for British Columbians?

BC Attorney General and minister responsible for housing David Eby said the biggest issue in the province remains supply.

“The challenge we face in BC is with a limited supply and an outsized number of bidders it just leads to out-bidding the current stock we have,” Eby said.

The province and federal government have committed to work together to build new houses.

But Sauder School of Business housing expert Tsur Somerville said it takes a lot of time to turn dollars into homes.

“The money does not turn into action very, very quickly. Yeah, money is good, but this is not a game-changer. It is a cup of water in a lake,” Somerville said.

“You have to do something about home equity lines to finance investments and flow money and that is very tricky to get right.”

The BC Liberals were quick to point out housing has never been more expensive to buy in the province.

The government has implemented some measures to make it easier to acquire land for building, but BC Liberal leader Kevin Falcon said the government should have shown more urgency to build homes.

“Unless you dramatically increase the supply, there is no way housing is going to be cheaper. We have had 100,000 people come to BC in the last year,” Falcon said.