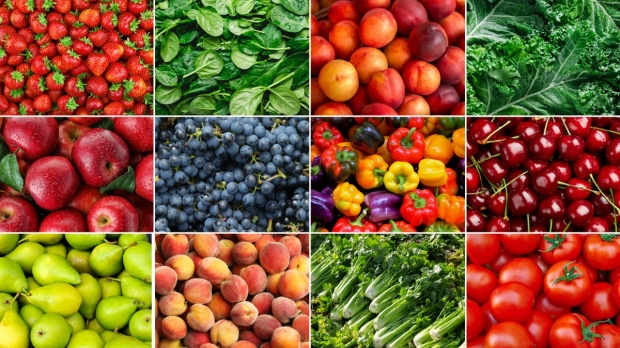 Strawberries and spinach continue to top the annual list of the “Dirty Dozen” fruits and veggies in the US that contain the highest levels of pesticides, followed by three greens — kale, collard and mustard — nectarines, apples, grapes, and bell and hot peppers, according to the Environmental Working Group’s 2022 Shopper’s Guide to Pesticides in Produce.

Cherries came in eighth this year on the list of the 12 most contaminated foods, with peaches, pears, celery and tomatoes rounding out the list.

But don’t stop eating these foods, which are full of the vitamins, minerals, fiber and antioxidants needed to battle chronic disease, experts say.

“If the things you love to eat are on the ‘Dirty Dozen’ list, we recommend buying organic versions when you can,” said Alexis Temkin, a toxicologist at the EWG with expertise in toxic chemicals and pesticides.

“Several peer-reviewed studies and clinical trials have looked at what happens when people switch to a fully organic diet,” she said. “Concentrations and measurements of pesticides decrease very rapidly.”

Consumers can also consult EWG’s “Clean Fifteen” — a list of produce with the least amount of pesticides. Nearly 70% of the fruits and vegetables on the list had no detectable pesticide residues, while just under 5% had residues of two or more pesticides, the report said.

Avocados had the lowest levels of pesticides among the 46 foods tested, followed by sweet corn, pineapple, onions and papaya.

Issued yearly since 2004, the EWG report uses US Department of Agriculture test data to rank 46 foods that are the most and least contaminated with pesticide residues. The USDA staffers prepare the food as consumers would — washing, peeling or scrubbing — before testing each item.

The USDA does not sample all 46 foods each year, so EWG pulls results from the most recent testing period. Strawberries, for example, have not been tested by the USDA since 2016, Temkin said,

Testing found the highest level of multiple pesticides — 103 — on samples of the heart-healthy trio of kale, collards and mustard greens, followed by 101 different pesticides on hot and bell peppers. In general, “spinach samples had 1.8 times as much pesticide residue by weight as any other crop tested,” the report said.

Being exposed to multiple pesticides, even at low levels, is “supra-additive,” with each pesticide having more of a health impact than it might in isolation, said Dr. Leonardo Trasande, chief of environmental pediatrics at NYU Langone, who was not involved in the report.

Health dangers from pesticides depend on the type, according to the US Environmental Protection Agency. Pesticides can impact the nervous system, irritate the eyes and skin, interfere with the hormonal systems of the body, or cause cancer, the EPA said.

The pesticide DCPA, classified by the EPA as a possible human carcinogen and banned in 2009 by the European Union, was frequently detected on collards, mustard greens and kale, the EWG report said.

Chlorpyrifos, a pesticide often used on nut and fruit trees and row crops such as broccoli and cauliflower, was banned by the EPA in February 2022 after a 15-year effort by environmental groups.

Chlorpyrifos contains an enzyme “which leads to neurotoxicity, and has also been associated with potential neurodevelopmental effects in children,” the EPA said.

Babies and children are especially vulnerable to pesticides, experts say, because of the damage the chemicals can cause to the developing brain. A 2020 study found an increase in IQ loss and intellectual disability in children due to exposure to organophosphates, a common class of pesticides.

A large number of pesticides also affect the endocrine system in developing fetuses, which can interfere with developmental growth, reproduction and metabolism.

“Even a brief exposure to pesticides which alter endocrine function can cause permanent effects if the exposure occurs during critical windows of reproductive development,” according to the EPA.

The agricultural industry has long complained about the release of the “Dirty Dozen,” saying EWG “willfully” misrepresents USDA data in the report.

“To put it simply, EWG’s attempt to twist the data to create bias … results in growing consumer fear of fruits and vegetables,” said Chris Novak, president and CEO of CropLife America, a national trade association that represents the manufacturers, formulators and distributors of pesticides.

“A study found that specifically naming the ‘Dirty Dozen’ resulted in shoppers being less likely to buy ANY vegetables and fruit, not just those named on their list,” Novak said via email.

In response, EWG said the study in question, which was funded by another industry association, the Alliance for Food and Farming, presents an entirely different reality than what Novak describes.

“The study actually shows that just over half of people surveyed said the ‘Dirty Dozen’ list made them more likely to buy fruits and vegetables,” Temkin said. “Only about 1 in 6 said our report would make them less likely to buy produce.”

Besides eating organic, there are a number of actions consumers can take to reduce exposure to pesticides — and many other toxins such as heavy metals — that can be found in produce.

Rinse all produce before serving. Don’t use soap, detergent or commercial produce wash — water is the best choice, experts say.

“Soap and household detergents can be absorbed by fruits and vegetables, despite thorough rinsing, and can make you sick. Also, the safety of the residues of commercial produce washes is not known and their effectiveness has not been tested,” the US Food and Drug Administration stated.

Choose local. Buying food that is purchased directly from a local farmer can reduce the risk of pesticide exposure, experts say.

Buy in season. Prices drop when fruits and vegetables are in season and plentiful. That’s a good time to purchase organic foods in bulk, then freeze or can them for future use, experts suggest.