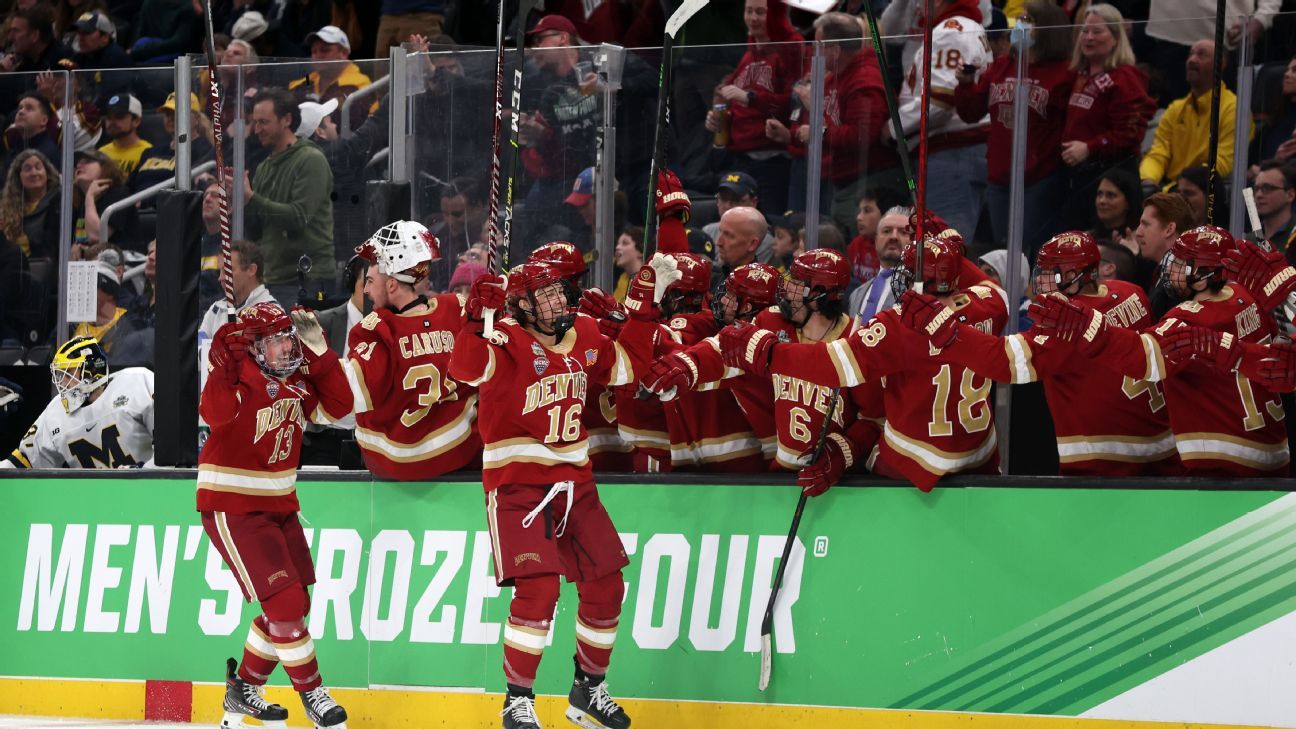 BOSTON — Denver and Minnesota State will play for the men’s ice hockey national title on Saturday night with a chance to make history for their respective programs.

The Pioneers eliminated top-seeded Michigan on Thursday in their Frozen Four semifinal game, 3-2 in overtime, to advance to the school’s first championship game since 2018.

The Pioneers, who won the title four years ago, are seeking the ninth men’s hockey championship in program history, which would tie Michigan for the most ever in NCAA Division I.

“It was a really good hockey game. We’re obviously excited to be on the positive end,” Denver coach David Carle said. “Our guys stuck with it, got the job done and we’re still in Boston through Saturday.”

Minnesota State defeated rival Minnesota, 5-1, in their semifinal game. This will be the Mavericks’ first appearance in the national title game. Minnesota State made its first Frozen Four last year, losing in the semifinals to St. Cloud State.

“The last Frozen Four didn’t end the way we wanted it to. We’ve been on a journey ever since to try and get back here,” Minnesota State coach Mike Hastings said. “So now we want to try and take advantage of the opportunity that these guys have earned.”

The Mavericks played strong defense in front of star goalie Dryden McKay, who made 16 saves. The Gophers’ lone goal came on one of Minnesota State’s rare gaffes in the game: With 11 minutes left in the first period, on a 2-on-0 breakaway off a Mavericks turnover, as forward Matthew Knies scored to give Minnesota the lead.

McKay, a senior, earned chants of “Hobey Baker!” from the Mavericks fans in the crowd, as he’s a finalist for the award honoring college hockey’s top player, which will be handed out on Friday night in Boston. The other two finalists are forwards Bobby Brink from Denver and Ben Meyers from Minnesota.

Denver and Michigan opened the Frozen Four semifinals earlier in the evening with a tightly played battle between two deep teams.

Left wing Carter Savoie’s goal with 5:07 remaining in the first overtime won the game for the Pioneers. The Wolverines tried to transition to offense before securing the puck. Denver collected the turnover, and leading scorer Brink’s pass from the right corner was converted by Savoie at the front of the net, sending the Pioneers into a celebration and the top-seeded Wolverines home.

“They turned the puck over at the blue line there. I tried passing it down to Bob, it hit a stake and then he obviously ended up getting it back. That pass was unbelievable. I got the first shot and then got the rebound, Said Savoie. “No words to describe it. Best feeling ever.”

Senior center Brett Stapley and senior right wing Cameron Wright had the other goals for Denver, whose strong play in the neutral zone left Michigan’s dynamic offensive players off the score sheet.

But Michigan tied the game with 10:51 left in the third. The play started with a sprawling block by Mark Estapa on a shot by Denver defenseman Antti Tuomisto. Michigan’s Michael Pastujov sped down the wing. His pass to the middle of the ice was deflected, but sophomore forward Thomas Bordeleau smartly slowed his progress in order to tap home the bouncing puck for the tying tally that would eventually force overtime, where Denver would end the Wolverines’ run.

The loss feels Michigan into an offseason of uncertainty. The Wolverines have seven players who were selected in the first round of the NHL draft, including four of the first five picks in the 2021 draft. Defenseman Owen Power, the No. 1 overall pick last year, is expected to sign with the Buffalo Sabers after the NCAA tournament.

Michigan coach Mel Pearson’s contract expires on April 30. When asked if he would be the head coach of the Wolverines next season, Pearson said: “I’m just going to talk about the game and our team tonight.”