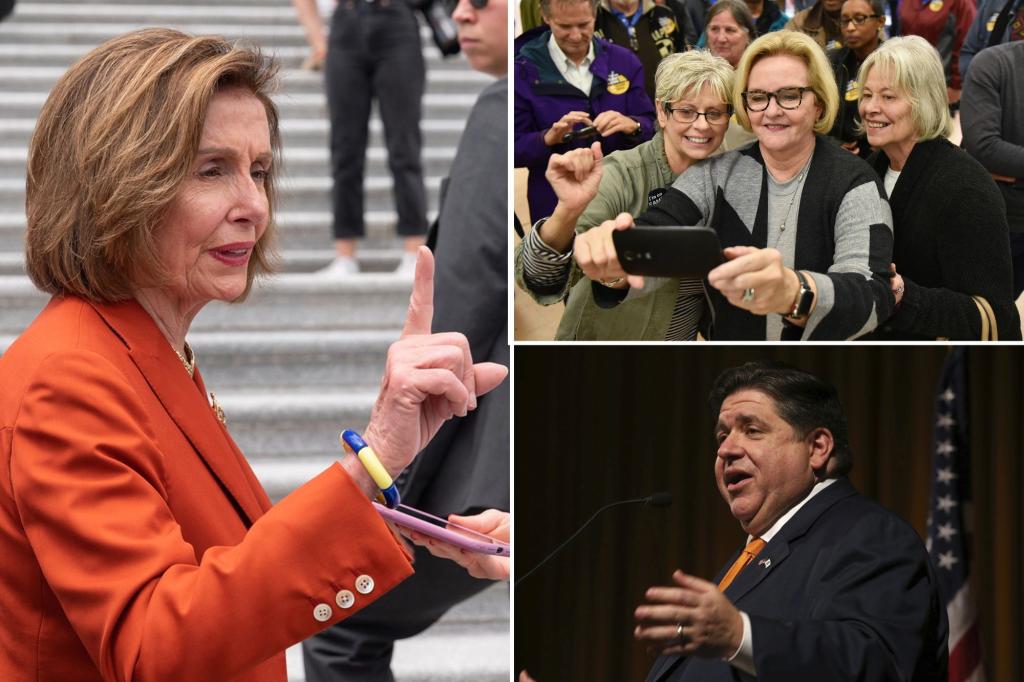 There’s a contradiction at the heart of the Democrats’ message for the midterm elections and beyond. They say democracy itself is endangered by former President Donald Trump and his supporters. President Joe Biden warns against the threat posed by “ultra MAGA Republicans,” a phrase that itself is a product of months of research by allies.

But what are Democrats actually doing? Pouring millions of dollars into boosting the campaigns of Republicans who could generously be described as “ultra MAGA,” some of whom make the former president look like the second coming of Edmund Burke.

Illinois Democratic Gov. JB Pritzker, touted by some as his party’s savior should Biden decline to seek re-election in 2024, spent $30 million to help his preferred Republican challenger against a more moderate opponent. House Speaker Nancy Pelosi’s political action committee and other Democratic groups are paying for ads actively promoting Republicans they view as fringe candidates. Even some of the more negative commercials have tended to raise the profile of these Republicans before their primaries.

By one count, Democrats have spent more than $42 million promoting the very Republicans they profess to most fear running the country. Why?

It’s a cynical maneuver not uncommon in politics. Democrats believe they will have an easier time defeating these candidates. It will give them a much-needed edge in retaining their razor-thin congressional majorities, which are in serious danger this fall. It’s been known to work on occasion in the past.

Keep up with today’s most important news

Stay up on the very latest with Evening Update.

Form Sen. Claire McCaskill famously worked to help then Rep. Todd Akin — he of the “legitimate rape” comment — win the Republican primary against her in 2012. “There were three viable candidates and Todd Akin was kind of the weirdest one,” she recently told National Public Radio. “I knew he might say some weird things if he were nominated. And he had less money, so we took a poll and figured out what Republican voters would really like about him.”

McCaskill beat Akin 54.7% to 39.2% six years before finally falling to Republican Sen. Josh Hawley, and Democrats held the Senate for another two years. “I had just made the biggest gamble of my political career — a $1.7 million gamble — and it had paid off,” she later boasted in an op-ed. “Running for reelection to the US Senate as a Democrat from Missouri, I had successfully manipulated the Republican primary so that in the general election I would face the candidate I was most likely to beat.”

But it doesn’t always work. The most obvious example is Trump himself. Democrats, especially Hillary Clinton’s campaign team, were licking their chops about facing Trump. “We need to be elevating the Pied Piper candidates so that they are leaders of the pack and tell the press to [take] them seriously,” read a memo to the Democratic National Committee at the time, referring to Trump and other Republicans they thought would be easiest to defeat. There was liberal chatter about helping Trump.

We all remember how that turned out. In retrospect, Trump was better positioned to take the Rust Belt away from Clinton than the candidate Democrats were most worried about, Marco Rubio. And in 2020, Trump came within 43,000 votes in three states of doing it again.

It’s even riskier given the political conditions Democrats face now. An Associated Press/NORC poll finds 85% see the country going in the wrong direction. Biden’s job approval rating is nearly 20 points underwater in the RealClearPolitics polling average. He’s in the 30s in many of the battleground states that will decide the election. Inflation, which the White House is increasingly framing as our patriotic duty to endure, remains rampant. And history is unkind to the party in power during these cycles.

Many Republican nominees will win their elections this fall, including people who may not be ideal candidates under ordinary circumstances. Some pretty unorthodox Republicans won in previous wave elections like 1994 or 2010, especially in the House.

This underhanded strategy also undermines the Democrats’ claim to be defending democracy. You cannot credibly argue that trafficking in dubious claims about the 2020 presidential election leads inexorably to dangerous events like the Jan. 6 Capitol riot while systematically supporting those candidates in an effort to secure an electoral advantage.

It just underscores what voters are likely to conclude in November: whatever the GOP’s problems, Democrats don’t deserve power.

W. James Antle III is politics editor of the Washington Examiner and author of “Devouring Freedom: Can Big Government Ever Be Stopped?”