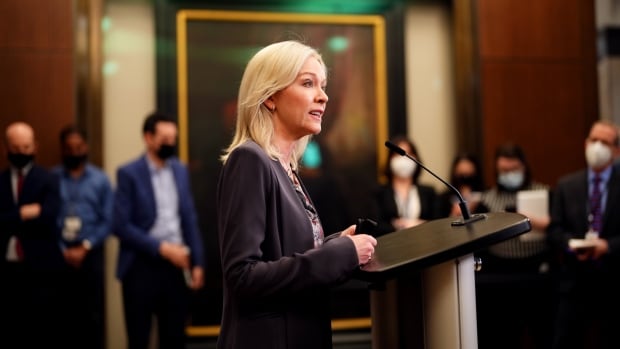 Conservative interim leader Candice Bergen said Thursday that Canada’s most pressing problems aren’t addressed in the new federal budget — which she claimed had been heavily influenced by NDP ideology.

“We were looking for controlled spending, which would in turn control inflation,” Bergen told reporters outside the House of Commons after the budget was tabled.

“It is an irresponsible budget. It is a typical, classic, NDP spend-and-tax budget.”

The plan tabled by Finance Minister Chrystia Freeland today commits billions of dollars to improving housing affordability and to environmental programs that could speed up Canada’s transition to a greener economy.

You can read in-depth coverage of the 2022 budget and its most significant initiatives below:

Bergen said the Liberal housing plan moves too slowly and will not help any Canadians afford a new home this year.

Despite increased spending in several areas — including for the military and a national dental program — the budget also forecasts a deficit of $52.8 billion in 2022-23, about half of what it was last year.

Bergen called on Canadians to not be fooled by the apparent improvement in Canada’s fiscal outlook. She accused the Liberals of years of poor fiscal management even before the pandemic struck.

“We’re like the frog that’s being slowly boiled. We’ve become so accustomed to these huge numbers we don’t realize how bad they are,” she said.

Political reaction to the new budget was predictable — both the Conservatives and Bloc Québécois said within minutes of the budget’s tabling that they would vote against it — but the New Democrats are in an unusual position.

The party has promised to support the minority Liberal government until at least 2024 as part of a recently signed “supply and confidence” agreement, so long as the government delivers on some NDP priorities.

In his reaction to the budget, NDP Leader Jagmeet Singh tried simultaneously to criticize the document while also taking credit for some of the things in it.

WATCH: Jagmeet Singh says NDP will support the budget despite some disagreements

NDP Leader Jagmeet Singh joins Power & Politics to share his perspective on the federal budget — the first since the Liberals signed a confidence and supply deal with his party. 7:54

He said the budget’s commitment to a national dental care program is a clear example of his party’s influence. Singh also cited the government’s plan to tackle the housing affordability crisis as further evidence that New Democrats are shaping federal policy in a positive way.

“We see that reflected in the budget, with concrete steps that would not have been there but for the fact that we forced the government to deliver,” Singh said.

Still, most of the budget’s key housing commitments—including a ban on foreign buyers and a program to jump-start new construction—were included in the Liberals’ 2021 election campaign.

The NDP was more willing to criticize the budget’s plans for climate change and the environment. Singh said he was “deeply concerned” by those measures.

The budget promises $2.6 billion over five years for a new tax credit for carbon capture — a technology that theoretically can sequester carbon from the atmosphere but has not been shown to be effective on a large scale.

The budget will create a new arms-length agency — the Canada Growth Fund — that will be capitalized initially with $15 billion to stimulate growth in low-carbon industries and help with the country’s transition to net-zero.

Candidates jockeying to become the next permanent Conservative leader also blasted the budget.

MP Pierre Poilievre said the new spending commitments will worsen the recent rise in inflation, which he blames almost entirely on the Liberal government’s spending habits.

“When your house is on fire, you don’t douse it in gasoline,” Poilievre said in a media statement.

Former Quebec premier Jean Charest also focused his criticism on what he called the lack of “fiscal discipline” in the budget. As prime minister, he said, he would institute that discipline in Ottawa while preserving social programs that help Canadians.

“The Liberals talk big game about sustainability, yet they offer none when it comes to our economy,” Charest said in a media statement.

Jimmy Jean, the chief economist at Desjardins, said the best way to tackle rising inflation is through the introduction of higher interest rates — something over which the federal government is not supposed to have direct control.

“I think it was the right choice to stay fairly hands-off with regards to inflation and let the Bank of Canada do its job,” he told CBC News.