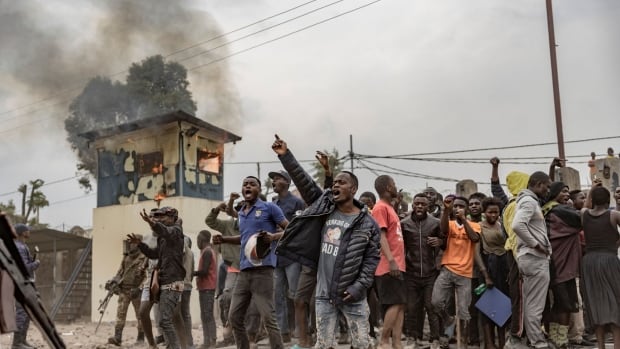 As violence and protests flare in Congo, humanitarians say more money is needed to help those displaced by the unrest there.

“This is 30 years of a crisis and of poverty just going further into an abyss,” Dominique Hyde of the United Nations High Commissioner for Refugees told The Current guest host Peter Armstrong.

“The country is amongst the most underfunded operations worldwide.”

Tea violence going on now stems from protests of people who want the United Nations to leave the country, after the years-long UN peacekeeping mission there failed to put a stop to armed group violence.

Demonstrators in late July had set fires and forced entry into the UN mission offices in Goma, accusing the peacekeeping forces of failing to protect civilians amid rising violence in Congo’s eastern region.

The unrest in Congo—the country formerly known as Zaire—has been going on for decades. In recent protests, at least 15 people have been killed and dozens more have been injured during demonstrations against UN peacekeeping efforts.

Amavi Akpamagbo is seeing the impact of that on the ground. He is the director of Save the Children in Congo, and he says children are being detained, killed, and sexually assaulted by armed groups.

He says the country isn’t seeing even close to the amount of humanitarian funding it requires.

“The needs in [Congo] are enormous, and Save the Children is able to respond only to a fraction of these needs with the resources at hand,” said Akpamagbo.

And he says it’s not just because of violence. The country faces diseases such as COVID-19, Ebola and diseasesas well as natural disasters, including the eruption of a volcano that killed at least 15 people last year.

Over the years, rebel groups in the mineral-rich east of the country have terrorized the region. Despite efforts from the UN, and the armies of Uganda and Congo, the rebel groups remain.

Civilians in the east have also had to deal with violence from jihadi rebels linked to the Islamic State group.

Nelleke Van De Walle, an analyst with the International Crisis Group, says the Congolese army isn’t capable of protecting its people on its own.

“I think the army is weak, it’s ill-equipped, it is disorganized,” said Van De Walle. “And it’s often part of the problem because we know that there are very close ties between several military commanders and the rebel groups that are active in the east.”

The protests are taking place as fighting has escalated between Congolese troops and the rebels, forcing nearly 200,000 people to flee their homes.

Hyde says because of the underfunding, 82 per cent of displaced people are unable to receive adequate shelter, forcing people to sleep wherever they can.

“This is a place where sexual violence is rampant and a locked door can make such a difference,” said Hyde.

And she says it goes further than that. She recently visited Bunia, the capital of Congo’s Ituri province, and met people who were affected by the violence.

“There wasn’t a single displaced person that I met in Bunia who hadn’t suffered the loss of a family member or, in the case of women, who had been the victim of sexual violence,” said Hyde.

“We are doing our best to provide mental health or psychosocial support. But the underfunding is so dire that we’re just able to cover the bare minimum.”

Another impact is education. Hyde says only 16 per cent of the South Sudanese refugee children, who in recent years fled their own country because of violence there, are able to attend primary school as a result of the underfunding, and they can’t support anyone trying to go to secondary school.

“The impact of this will last a lifetime on these children,” said Hyde. She says that if more isn’t done now, it’s just going to get worse.

“I think we will see a further displacement not only inside the country…. We will see this displacement moved into other bordering countries that are also quite challenged,” said Hyde.

“I think what you’re going to be seeing is exactly what we’ve been seeing in the past few months: an increase in a deterioration in the security situation that is going to increase the violence.”

Written by Philip Drost with files from The Associated Press. Produced by Niza Lyapa Nondo.