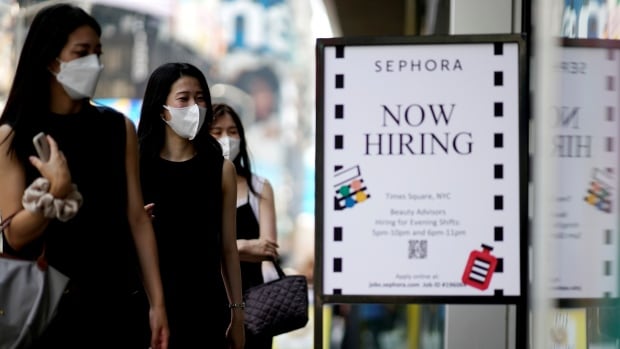 Canada’s economy added 73,000 jobs last month, a little less than economists were expecting but still enough to push the official jobless rate to 5.3 per cent, the lowest level seen on records dating back to 1976.

Statistics Canada reported Friday that both goods-producing industries and the service sector added jobs, but most of the gains were concentrated in Ontario and Quebec, which added 35,000 and 27,000 new jobs, respectively.

The jobless rate is now lower than it was before the pandemic, when it was as low as 5.4 per cent in May of 2019.

The jobless rate may well go lower still, as employment growth has been outpacing population growth in Canada for more than half a year now, the data agency said. Since September 2021, Canada has added 463,000 new jobs, even as the population of working aged people has only grown by 263,000.

That’s a recipe for low joblessness, which is good news for anyone looking for work, but it’s also good news for people who already have a job, since it will likely lead to higher wages, too.

The growing demand for workers has pushed up average wages by 3.4 per cent in the year up to March. That’s about half the inflation rate, but if current trends in the job market continue, it follows that wages must go higher, too.

“Wages have only one way to go, with a record-low jobless rate and workers pay trailing well behind inflation … and that’s straight up,” Bank of Montreal economist Doug Porter said.

Jay Zhao-Murray, an analyst with foreign exchange firm Monex Canada, said the job number for March suggests wages are on a clear trajectory.

“Wage growth is a lagging indicator of a tight labor market, and is therefore likely to rise in coming months,” Zhao-Murray said.