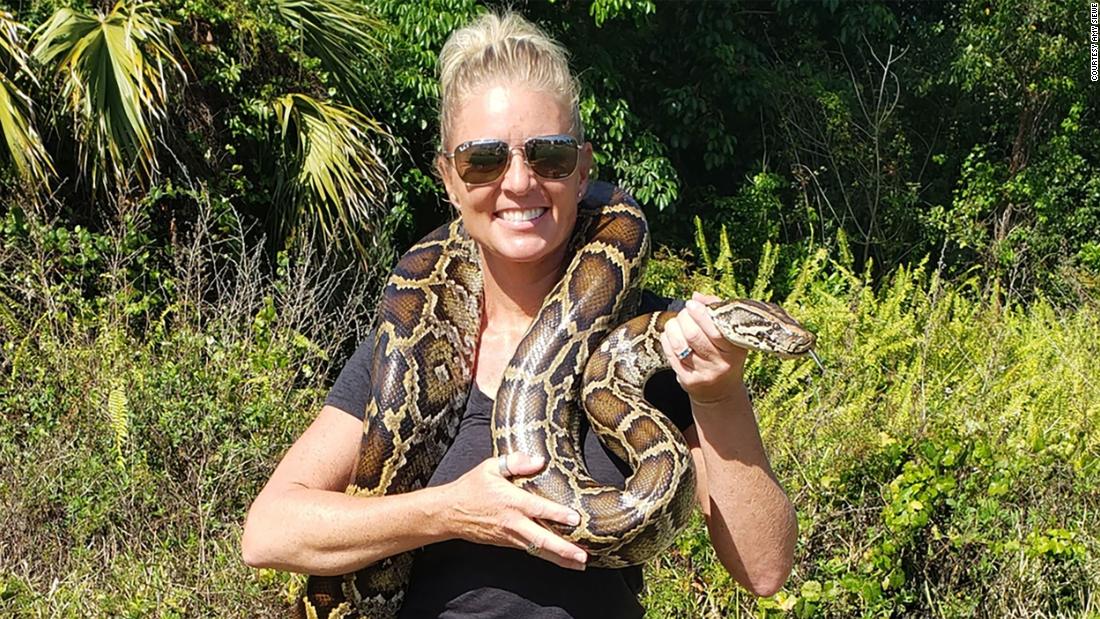 Nowadays, you’re lucky if you spot one mammal in the area, according to wildlife experts.

Who’s to blame for this decline in wildlife? The invasive species known as Burmese pythons.
To help combat this problem against Florida’s ecosystem, snake hunters are congregating in the hundreds for the Florida Python Challenge. The event, created by the Florida Fish and Wildlife Conservation Commission, started in 2013.

“I love snakes. I hate that we have to do this, but they’re invasive and changing the entire ecosystem.” professional python hunter Amy Siewe told CNN.

According to the commission, these reptiles were detected as early as 1979 in Florida.

“They were introduced to Florida through accidental and intentional release through the pet trade,” a spokesperson with the commission told CNN Friday.

Since then, they’ve killed and continue to pose a major threat to wildlife.

The event brings hundreds of professional snake hunters to the Everglades to hunt and kill the reptiles. As of Friday, more than 850 people had signed up, the commission said.

August 5 marked the start of this year’s 10-day challenge.

To participate, members were required to take an online training course and pay a $25 registration fee. The hunter who brings back the most pythons wins $2,500.

Aside from the challenge, year-round removal efforts are still in play. Since 2000, more than 17,000 pythons have been removed and reported, according to the commission.

Michael Kirkland, a biologist with the South Florida Water Management District, told CNN that pythons have been “decimating wildlife for years”.

“The challenge is designed to remove as many pythons from the area as possible,” he said, “Human detection and removal are the most efficient and effective tools in the toolbox right now,”

Contractors hired with the water management district work year-round and participate in the challenge to capture the creatures.

Kirkland said there has been up to a 90% decline of animals in the area due to pythons.

Among the many partaking in the challenge this year are Siewe and Donna Kalil.

Kalil told CNN has been professionally hunting the reptiles since 2017. Siewe was hired a few years later in 2019.

Both share a love for the creatures but understand the importance of this challenge. “The hunters are the best way we have at this moment to help with this problem,” Siewe said.

Kalil grew up in Florida and said when she went to the Everglades as a kid there were “so many rabbits you couldn’t count them all.” Fast forward to the 2000s when Kalil said there were practically no rabbits, possums or raccoons as a result of the pythons.

In last year’s challenge Kalil took home the $2,500 prize for removing the most pythons at 19. She’s been participating since 2013.

This will be Siewe’s third year. In her first year, she won second place for the heaviest snake.

The two will base their hunting on factors like weather, time of day and sleep schedule. “This time of the year, the nighttime is best to go out,” Kalil said.

Throughout her career, Siewe has suffered from many python bites and said she doesn’t recommend it.

“It’s like a warm knife going through butter,” Siewe described. Pythons, while not venomous, have hundreds of teeth that are razor sharp, according to Siewe.

The creatures can grow to massive sizes and it’s a feat to take them on. Siewe said her largest capture measured 17 feet and 110 pounds, which she caught standing 5 foot 4.

Kalil shares that you can’t catch them all. “I’ve had four get away from me during my career,” she said. “It can be difficult during the night in the water and weeds.”

Florida Gov. Ron DeSantis has been an avid fan of the python challenge. In a June press release, he said, “I am proud of the progress we’ve made, and I look forward to seeing the results of this year’s Python Challenge.”

In fact, his wife, Casey DeSantis, shared in a press conference Friday that her 10-year anniversary gift to the governor was a pair of python skin boots.