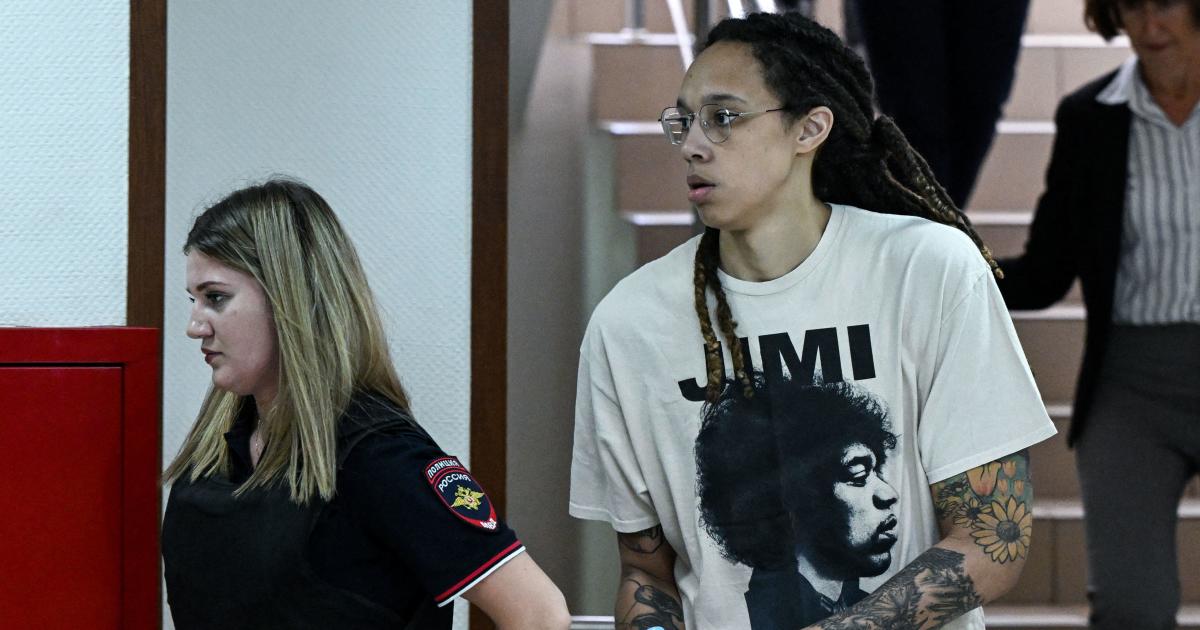 The trial against American basketball star Brittney Griner began in a Moscow courtroom on Friday. The 31-year-old WNBA star player is facing up to 10 years in prison on drug smuggling charges.

Griner arrived at the Khimki City Court, in the Moscow suburbs, in handcuffs and a Jimi Hendrix t-shirt, accompanied by her legal team. The judge heard witness testimony during a three-hour session before announcing that the trial would resume on July 7.

Griner, who plays for a Russian basketball team outside of the WNBA season, was arrested in February at Moscow’s international airport just a few days before Russia launched its invasion of Ukrainesending relations with the United States into a tailspin.

After an airport sniffer dog found vape cartridges in her luggage, authorities later said they contained “a significant amount” of cannabis-derived oil. Marijuana is illegal in Russia for recreational and medical use, and possession of it carries heavy penalties.

Griner has made no public statements since her arrest, and her position on whether she accepts or rejects the accusation remains unclear.

US Charge d’Affaires Elizabeth Rood attended the court session on Friday and told reporters afterward that Griner was “keeping the faith.” Rood said she had spoken with Griner and that the basketball player was doing “as well as can be expected.”

“The Russian Federation has wrongfully detained Brittney Griner,” Rood said. “The practice of wrongful detention is unacceptable wherever it occurs and is a threat to the safety of everyone traveling, working, and living abroad.”

Rood added that the US government was working at the “highest levels” to “bring Brittney and all wrongfully detained US nationals home safely.”

Most media outlets were barred from entering the courtroom on Friday, which the court said was per Griner’s request, according to the Mediazona outlet, which covers justice in Russia.

“It’s very clear that they did not need to bring the severity of charges as they did,” he told CBS News senior foreign correspondent Charlie D’Agata. “They chose to do that in order to grab the US attention and threaten her with the worst possible outcome.”

With relations between Moscow and Washington at a low not seen since the days of the Cold War, Griner’s family and teammates had kept a low profile to avoid drawing public attention to her case, and potentially making her an even more valuable asset for Russian propaganda. In May, however, the US State Department declared her wrongfully detained, and shifted oversight of her case to its special presidential envoy for hostage affairs.

The Kremlin on Friday rejected the notion that Griner’s case was politically motivated.

“It cannot be politically motivated,” presidential spokesperson Dmitry Peskov said in a briefing. “She was in possession of illegal drugs containing narcotic substances.”

Griner’s wife Cherelle told the Reverend Al Sharpton on his radio show this week that she hadn’t heard her partner’s voice since she was detained, but she shared that Griner had conveyed to her through letters that she was “struggling and terrified.”

“I won’t let them break me,” Griner said in the letters, according to Cherelle. “I know they’re trying to, but I’m going to do my best to just hold on until I can get home.”

“I hope that that’s quick,” said Cherelle, “because I’m not okay.”

Griner’s supporters urged the Biden administration to facilitate a prisoner swap similar to the one that saw former US Marine Trevor Reed released in exchange for Konstantin Yaroshenko, a Russian pilot serving a 20-year prison sentence for drug trafficking, in April.

Russian media have speculated that Moscow could seek to exchange Griner for notorious Russian arms dealer Viktor Bout. The so-called “Merchant of Death” is currently serving a 25-year prison sentence in the US for conspiracy to kill Americans and aiding a terrorist organization.

Another former US Marine remains in custody in Russia: Paul Whelan is serving a 16-year prison sentence on espionage charges. The US government has said he is being used as a bargaining chip in potential negotiations between Moscow and Washington.