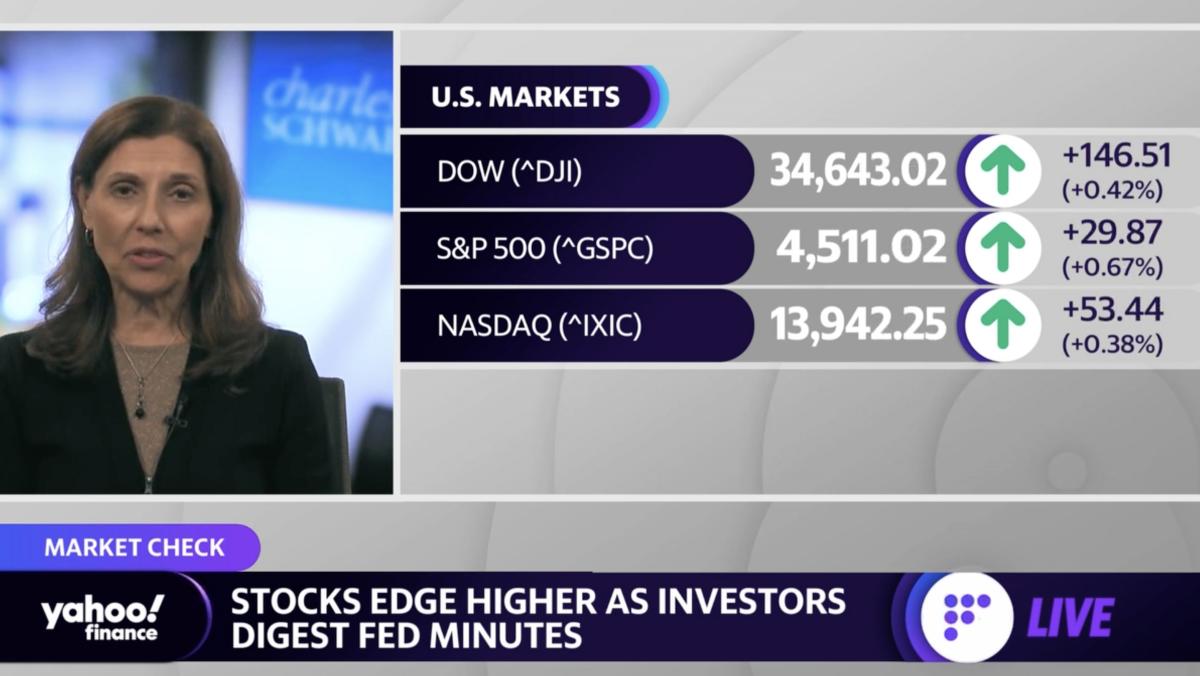 Charles Schwab Chief Fixed Income Strategist Kathy Jones discusses the latest moves in yields and what it means for investors.

RACHELLE AKUFFO: All right. Well, let’s take a look at how the markets have been faring. Today they were mostly in the red, but then tipped into the green. Let’s find out why with our next guest, Kathy Jones, the Charles Schwab chief fixed Income strategist. Thank you for joining us today. So Kathy, as we saw, mostly in the red today, but we did see now the major indices tipping into the green. What do you think the markets are reacting to at the moment?

– And so where are the opportunities as of right now?

KATHY JONES: Well, I focus on fixed income, and we’re actually looking at this big jump in yields is offering up a lot of opportunities for income investors. So we know that investors have gotten killed the first quarter. They’ve been very brutal for fixed income as yields jumped, but now, when we look at it, we’re seeing everything from high-quality municipal bonds in the 3% area, which on an after tax basis for somebody in a high tax bracket is over 5%.

Looking at investment grade corporate bonds at 3.5% to 4% preferred securities, pushing up to 4.5% to 5%, maybe a little bit above, when it’s starting to look like you can actually get income fixed income. And so we think that that’s something that investors really need to keep an eye on.

– You say your strategy, Kathy, is to be cautious. Are we waiting out the storm over the next couple of months?

KATHY JONES: No, I don’t think it pays to wait out the storm in the sense that if you are waiting to buy bonds until the Fed is done hiking, you’ll probably have waited far too long. Because history suggests the market really is going to discount a lot of this ahead of time, and that’s why we’re seeing the yield curve flattening out here.

So what we’re being cautious about, though is credit quality and just rushing too fast. We’ve got a tremendous number of uncertainties with the war in Ukraine, how fast the Fed is going to move, how they’re going to unwind the balance sheet, what’s going to happen in Europe with a European Central Bank, and we’ you got a lot of stuff going on here. So we’re more cautious about credit quality and taking a methodical approach, rather than just hanging back and waiting.

RACHELLE AKUFFO: So Kathy, talk about some of the key questions that your clients are asking you right now about how they should be positioning themselves in this climate.

KATHY JONES: So a lot of the focus is on, OK, maybe a lot of people have been sitting in cash or had some money in cash because the yields weren’t terribly attractive, and they were getting nervous about stocks. So now, it comes time to rebalance especially around tax time. Where are the opportunities? How much risk should I be taking? How long a duration should I have in my fixed income portfolio? How high is high in terms of yields?

And that’s one of the things we’ve been working on is how high can we expect yields to go. If Bullard is right and we’re going to 3 plus on the Fed funds rate, I suspect that you’ll see 10-year yields top out around 3%. So usually, the curve converges near the peak of the cycle. I think Bullard might be a little bit on the more aggressive side than some of the rest of the Fed officials, but that’s certainly a big question is, where is the peak and yields going to be?

And then there’s the big question around recession. Is the Fed tightening going to cause a recession down the road? It certainly doesn’t look like it right now, but we could see a deceleration in growth in the second half of the year, and it’s really something to keep an eye on.

– It’s really interesting because in the meeting minutes, you got this sense that the Fed and the FOMC really thought that they needed to get this right and this policy pathway correctly because now the public is tuned in more so than usual into how they could themselves, with some of the policy decisions, perhaps as you mentioned if they are going too fast too quickly and too furiously, if you will, then that could potentially trigger a recession.

KATHY JONES: Yeah. Again, it’s not yet at the point where it looks like it’s imminent, but typically, what happens if you have a very aggressive policy tightening by the Fed, soft landings are pretty rare. So it does raise the prospect of the risk of recession, say 12 months down the road. I think we’re already starting to see some of the indicators of a slowdown, things like housing activity is starting to roll over. Because mortgage rates are up near 5% now. That’s going to slow down housing activity.

We’ve got some consumer credit numbers coming out this afternoon. We’ve already seen a revolving credit, the use of credit cards. That’s starting to roll over. So consumers are starting to respond, I think, to the combination of higher inflation and higher interest rates. And the purpose of Fed tightening is also to say, all right, we’re going to make risk-free rates more attractive, so riskier assets are less attractive. That’s the opposite of what they’ve been doing for the last couple of years. So I think that’s something also you have to think about when you’re planning out a portfolio, managing that risk.

– Larry Summers wrote in “The Washington Post,” he expects or would like to see two consecutive meetings of 50 basis point increase from the Fed. Would you like to see– would you be surprised by that rather?

KATHY JONES: Not at this stage of the game. Certainly, given the rhetoric coming from the Fed, I wouldn’t be surprised at all by it. Is it the right policy? Remains to be seen. But it looks like what I get from the Fed is we want to start fast and then leave our options open. So they really, really want to communicate the idea that they’re on top of the inflation situation by being aggressive with rate hikes and the balance sheet. And then maybe towards the end of the year, step back a moment and say, OK, where are we, how fast do we have to go from here.

RACHELLE AKUFFO: We do appreciate you joining us this afternoon. Kathy Jones at the Charles Schwab, chief fixed income strategist. Thank you so much.