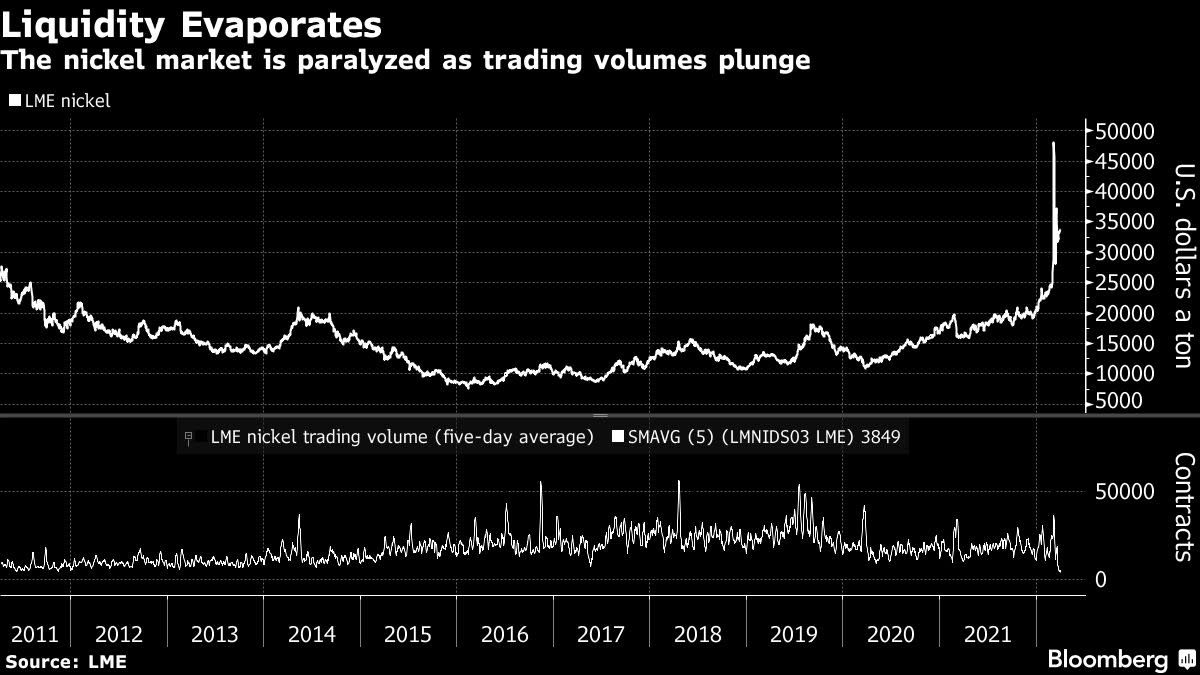 (Bloomberg) — The world’s main nickel market is broken and no one seems to know how to put it back together.

Most Read from Bloomberg

One month since the metals world was brought to its knees by an unprecedented squeeze, the “big short” that sparked the crisis is still mostly in place. Volumes on the London Metal Exchange have all but dried up, and prices are stuck at historically high levels that have become detached from the real world of much of the nickel industry.

While the fireworks are over, the market has settled into a kind of standoff. Xiang Guangda, the Chinese tycoon at the center of the squeeze, is no longer facing giant margin calls. But he still has a sizable bet on lower nickel prices, according to people familiar with the matter. While Xiang reduced his short position somewhat last month, he has largely stopped covering the position since then because of a rise in prices, the people said.

And the options for Xiang to meaningfully reduce his position may be limited in the short term. Refined nickel metal — the type that must be delivered onto the LME when short positions are held to expiry — is in tight supply. In the derivatives market, there’s been little indication so far that any holders of large long positions are ready to “net off” their holdings against Xiang’s. Without a deal to reduce his shorts, Xiang will simply need to keep rolling the positions as they near maturity and hope for a drop in prices — potentially leaving the market stuck in limbo for a prolonged period of time.

“There’s still a lot of nervousness and cautiousness in the market,” Xiao Fu, head of commodities strategy at BOCI Global Commodities, said by phone from London. “Nickel is likely to remain highly volatile and due to geopolitical uncertainty and low liquidity, we won’t see a return to normal any time soon.”

The key reason that prices spiked to more than $100,000 a ton on March 8 — in trades that were later canceled by the LME — was that Xiang’s Tsingshan Holding Group Co. was struggling to pay margin calls from its banks and brokers. That is no longer a factor, after Xiang reached a standstill deal with his banks before the LME reopened the market.

Then, when a drop in prices below $30,000 a ton triggered a flurry of nickel trading in mid-March, the company covered about 20% of its short position, according to people familiar with the matter. That helped prompt a recovery in prices to current levels of over $33,000 ton, and Tsingshan has hardly reduced his position since, the people said.

That means Tsingshan still has a short position of well over 120,000 tons. Compared with total nickel stocks in LME warehouses of about 75,000 tons, it’s a position that easily still large enough to roll the market.

And liquidity has all but disappeared, as banks and brokers seek to reduce their exposure. Despite prices that, apart from the spike in early March, are at the highest since 2008, the traded volume of the LME’s benchmark 3-month contract has over the past week been the lowest in more than a decade.

The LME nickel price is still high relative to other parts of the nickel world. Nickel pig iron, a semi-processed form used to make stainless steel, has fallen to discounts to the LME price that are “unprecedented,” according to a recent note from analysts at Macquarie including Jim Lennon.

Could the nickel market see a repeat of March’s squeeze?

Possibly, but it wouldn’t be as dramatic or chaotic. For one thing, the LME has changed its rules to prevent the price moving more than 15% in one day. For another, Xiang’s deal with his banks means he shouldn’t be pressured by margin calls in the same way. And another new LME rule means that anyone who has a short position that is due for delivery and is unable to deliver can now pay a fee to roll it.

But with the LME’s main contract for April due to be traded as “cash” at the end of next week, one party still holds a short position equivalent to more than 40% of the open positions in the contract, according to LME data. However, that number does not represent Tsingshan’s position, as the Chinese company has shifted most of its short positions away from the April contract, the people said.

Even if April passes without great drama, Tsingshan’s short position still looms over the market. Tsingshan had paid its margin calls up until March 4, when the nickel price closed at $28,919 a ton. That means that its banks do not need to extend any credit to the company to cover losses incurred on its position if it covers at around that price or lower. On Friday, nickel was trading at about $33,720.

Most Read from Bloomberg Businessweek