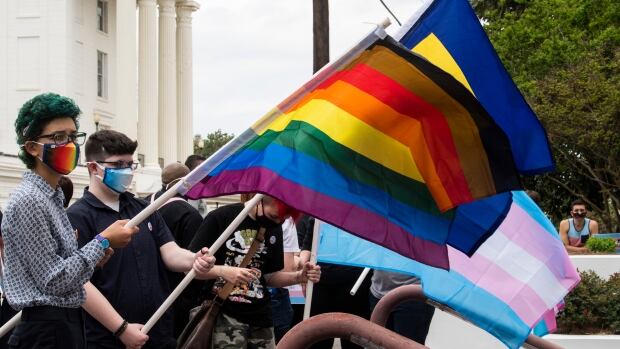 The bills now go to Republican Gov. Kay Ivey for her consideration as Alabama becomes the latest red state to seek legislation and policies aimed at transgender youth. Ivey, who is running for re-election, has not indicated whether she will sign the measures.

The Alabama House of Representatives voted 66-28 for legislation to make it a felony, punishable by up to 10 years in prison, for a doctor to prescribe puberty blockers or hormones or perform surgery to aid in the gender transition of people under 19.

The topic of transgender and LGBTQ identity has become one of the Republican Party’s “wedge” issues aimed at securing votes because they are popular with the party’s base.

Rep. Neil Rafferty, the only openly gay member of the Alabama legislature, appeared to struggle to hold back his anger and maintain composition as lawmakers headed to the vote.

Republican Rep. Wes Allen, who is sponsor of the House version of the bill, argued during debate Thursday morning that transgender youth are not old enough to make decisions about gender-affirming medication.

“Their brains are not developed to make the decisions long term about what these medications and surgeries do to their body,” Allen said.

Rep. Chris England, who serves as chair of the Alabama Democratic Party, said the measure targets already-vulnerable children and essentially tells them they are not welcome in Alabama.

“You’re saying this is about children. It’s not. What it is about is scoring political points and using those children as collateral damage,” England said.

The bill would also require school counsellors, nurses and others to tell parents if a child discloses they believe they are transgender.

A spokesperson for Ivey did not immediately reply to a text message asking if the governor will sign the measure.

“I want the governor to know that she doesn’t have to sign this, she can veto it,” said Jeff Walker, whose 15-year-old daughter, Harleigh, is transgender. “All you are doing is hurting Alabama families with these bills.”

Arkansas approved a similar law in 2021, but it was put on hold by the courts. Advocacy groups in Alabama have vowed to quickly challenge the measure if Ivey signs it into law.

In a written statement, Chase Strangio, deputy director for Trans Justice with the ACLU’s LGBTQ & HIV Project, called the Alabama measure “the most deadly, sweeping and hostile law targeting transgender people in the country.”

White House spokesperson Jen Psaki told reporters Thursday that the Department of Justice has warned states such laws and policies may violate the US Constitution and federal law.

“Today’s vote in Alabama will only serve to harm kids,” she said.

Senators voted 26-5 in favor of mandating that K-12 students can only use multiperson bathrooms and locker rooms that correspond with the gender on their original birth certificate, rather than their current gender identity.

Republicans in the Senate also added language similar to a law in Florida that critics called the “Don’t Say Gay” measure.

The Alabama language would “prohibit classroom instruction or discussion on sexual orientation or gender identity” for students in kindergarten through the fifth grade.

The Alabama proposal goes further than Florida’s law, which includes kindergarten through Grade 3.