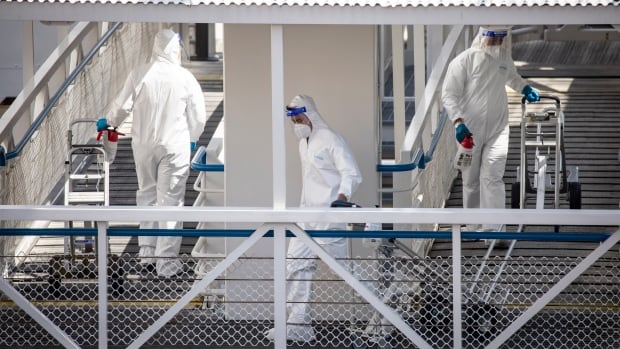 Forty-two people died in BC after testing positive for COVID-19 last week, and hospital and critical care admissions are up, according to the BC Center for Disease Control’s weekly report on the pandemic.

As of Thursday, 570 people are in hospital due to COVID-19, and 47 people are in intensive care, according to the BC COVID-19 dashboard.

That’s an increase of 17 per cent in hospitalizations compared to last Thursday when 485 people were in hospital due to the virus. Critical care admissions are up 23.6 per cent from last week, when 38 people were in intensive care.

The numbers released Thursday are part of a new approach from BC health officials, both in the move to weekly reporting and in how certain metrics are calculated.

Other data related to the pandemic is available in the report from the BC Center for Disease Control, which, this week, is tracking cases, hospital admissions and deaths between April 17 and 23.

According to the province, 42 people died within a month of a positive COVID-19 test in that period. The BCCDC notes in its report that the number of hospital admissions and deaths is provisional and likely to increase.

The report published Thursday, shows that 2,726 new cases of COVID-19 were reported in that time, based solely on lab-reported results, for a total of 363,302 cases to date.

That’s a 11.7 per cent increase compared to last week, when 2,036 cases were reported. However, due to changes in testing, the province says the case count likely underestimates the true number of people with COVID-19 in BC

A total of 355 people were admitted to hospital with COVID-19 between April 17 and 23, according to the BCCDC.

COVID-19 levels in wastewater on the rise

The number of deaths in BC’s weekly reporting include everyone who died within 30 days of testing positive for COVID-19, whether or not the virus has been confirmed as an underlying cause of death. Previously, each death was investigated to determine if COVID-19 was a cause.

The test positivity rates in the province are on an upward trend, hitting 11 per cent throughout BC as of April 23, up from 9.8 per cent the previous week.

Provincial Health Officer Dr. Bonnie Henry has said anything above a five per cent test-positivity rate is an indicator of a more worrying level of transmission.

Provincial statistics show more than 33,954 doses of COVID-19 vaccine were administered from April 17 to 23.