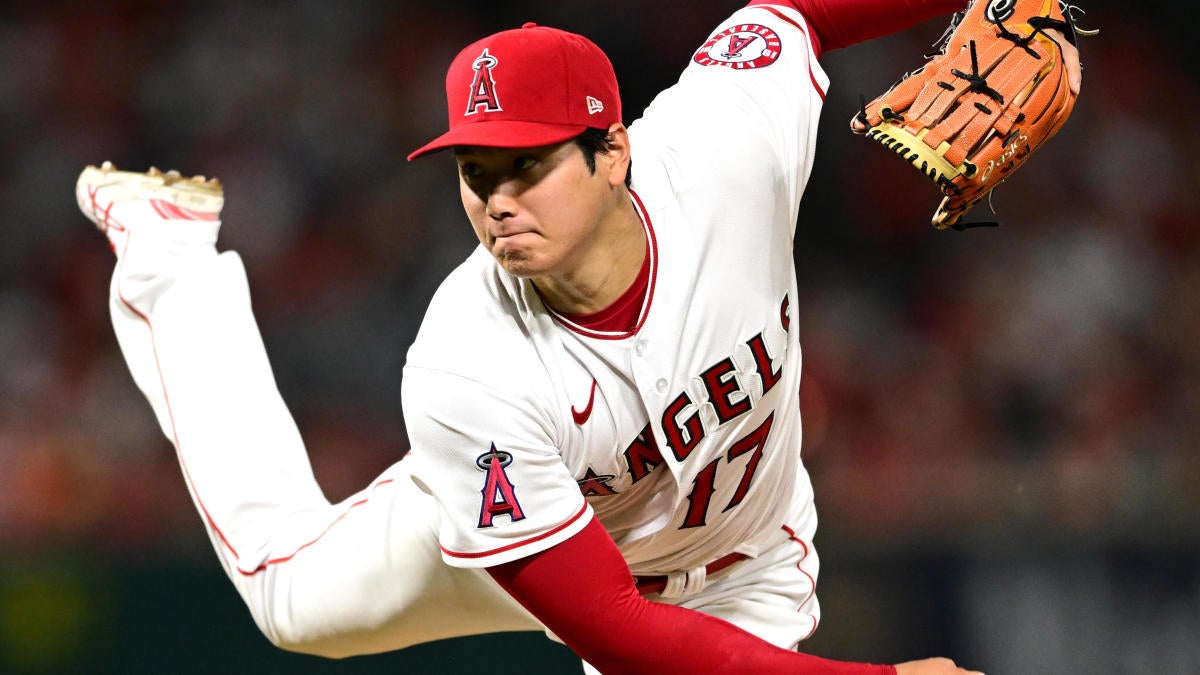 Major League Baseball is back. After an offseason that included a 99-day owner-imposed lockout that threatened a full season and delayed Opening Day by a week, MLB’s 162-game 2022 regular season got started Thursday. The day gave us a seven-game slate that featured a bit of history from Shohei Ohtani and a strong debut from Royals rookie Bobby Witt Jr.

The other 16 MLB teams will open their seasons Friday (full schedule here). First, here’s a look at Thursday’s scoreboard:

And now for some takeaways from the first day of the 2022 regular season.

Early on against the Astros on Thursday night, Angels two-way superstar made major-league history. He was the Angels’ starting pitcher in the team’s opener, and he was the leadoff hitter in Joe Maddon’s lineup. That occasioned this:

If you paid much attention during his MVP run in 2021, in which he excelled on the mound as a starting pitcher and at the plate as the Angels’ primary DH, then you’re accustomed to this sort of thing – ie, history from Ohtani on what seems like a nightly basis.

After that early achievement, Ohtani got down to business. He worked 4 ⅔ innings and over that span struck out nine against one walk with one run allowed while regularly hitting triple digits with his fastball and showing command of his breaking stuff. After he was lifted as the starting pitcher, Ohtani was able to remain in the game at DH thanks to the freshly implemented “Ohtani rule.” On the downside, he endured an 0 for 4 nights at the plate.

Having much to do with that 0 for 4 night was Astros lefty Framber Valdez, who turned in the best performance of any Opening Day starter. Valdez worked 6 ⅔ shutout frames, allowed just two hits, and struck six against one walk. At one point, Valdez sat down 15 Angels in a row, and he recorded 11 groundouts on the night.

Alex Bregman and Yordan Alvarez each homered for Houston.

Padres right-hander Yu Darvish no-hit the Diamondbacks for six innings on Thursday night at Chase Field, but that was a mere prelude to some ninth-inning heroics for Arizona.

With the game close and Darvish’s pitch count rising, San Diego manager Bob Melvin opted to call it a night for Darvish between innings. Tim Hill opened the bottom of the seventh and allowed a leadoff hit to Pavin Smith that ended the no-hit bid. Had the Padres been able to complete it, then it would’ve been just the second Opening Day no-hitter in MLB history. The first and only one was twirled by Bob Feller in 1940.

It wasn’t quite peak Darvish, as he had more walks (four) than strikeouts (three), and there’s little doubt that the Diamondbacks will be a bad offensive team this season. That said, it’s encouraging to see the 35-year-old Darvish putting up zeroes after what was, by his standards, a disappointing 2021.

The 2-0 lead to that Darvish was staked when he left held until the bottom of the ninth. In that final frame, Robert Suarez walked the first two batters, put the tying run in scoring position with a wild pitch, and then loaded the bases via hit batsman. Melvin at that point summoned Craig Stammen to face Seth Beer. Another wild pitch plated Arizona’s first run of the night, and then Beer didn’t miss this breaking ball at the bottom of the zone:

Ideally, 40-year-old right-hander Adam Wainwright wouldn’t have started in the Cardinals’ 9-0 win over the Pirates on Opening Day. Jack Flaherty is the St. Louis ace these days, but he’s out until at least late May because of shoulder problems. His health issues pushed Wainwright into the top rotation spot, and on Thursday he delivered with six shutout innings and six strikeouts against zero walks.

In vintage fashion, Wainwright didn’t break 90 mph all day and leaned heavily upon his sinker, curve and cutter. He picked up four whiffs and 22 called strikes along the way. In the fourth, he got out of his only real jam of the day by inducing an inning-ending double play. No, the Pirates are not a good offensive team, but Wainwright’s outing was impressive in any context.

Consider it a continuation of his work in 2021. Last season, Wainwright topped 200 innings (an increasing rarity) and pitched to a 3.05 ERA and a 3.48 K/BB ratio with an MLB-leading three complete games. For his troubles, he finished seventh in the NL Cy Young balloting. It was one of the great age-39 pitching campaigns ever, and if Thursday’s results are any guide then Wainwright may be in for a memorable age-40 campaign.

On offense for St. Louis, Tyler O’Neill homered and drove in five, and Paul Goldschmidt reached base five times.

The Bobby Witt Jr. era is underway. witt, the No. 2 prospect in baseballled the Royals to an Opening Day win with his impressive play on both sides of the ball against the Guardians. He notched his first MLB hit and RBI with a game-winning double in the eighth inning. Witt also made a splendid sliding play at third base earlier in the game.

Witt, 21, was the No. 2 pick in the 2019 draft, and he authored a .290/.361/.576 batting line with 35 doubles and 33 home runs in 124 games split between Double-A and Triple-A last year . It was his only full minor league season because of the pandemic. Witt had a monster spring training and forced his way onto Kansas City’s Opening Day roster.

Elsewhere, Zack Greinke turned in a workmanlike effort in his first start back with the Royals. He held Cleveland to one run in 5 2/3 innings despite striking out only one and generating only five swings and misses among 84 pitches. The Royals are looking for their first winning season since their World Series win in 2015.

Tylor Megill, not Jacob deGrom or Max Scherzer, was on the mound for the Mets on Opening Day. deGrom will miss several weeks with a shoulder issue and Scherzer’s season debut was pushed back to Friday due to a minor hamstring issue. That pushed Megill into action and he was every bit as good as deGrom or Scherzer could have been.

On Thursday, Megill struck out six in five scoreless innings against the Nationals, and he allowed only three baserunners. Not only that, but Megill came out throwing harder than he did at any time as a rookie last year. His fastball averaged 96.1 mph Thursday, up about 2 mph from last year, and he topped out at 99.1 mph. Megill threw the eight fastest pitches of his career Thursday.

Robinson Canó had an impressive all-around game in his return from last year’s performance-enhancing drug suspension. He went 2 for 3 with a walk at the plate, including laying down a bunt to beat the shift, and he turned several nifty plays ranging to his right on defense. At age 39 and after last year’s suspension, Canó has a lot to prove this year, and he was strong in the opener.

As for the rest of the offense, the Mets got contributions all throughout the lineup. Every starter had a hit except No. 9 hitter James McCann, who drove in the team’s first run of the season with a bases loaded hit by pitch. Offseason additions Mark Canha, Eduardo Escobar and Starling Marte went a combined 4 for 12 with a double.

The Nationals received a solo home run from Juan Soto, the 99th of his career, and not much else. That, unfortunately, figures to be a theme for Washington in 2022. They’re a one-man army.

Seiya Suzuki is officially a Major Leaguer, and he owns a .750 on-base percentage. Suzuki went 1 for 2 with two walks for the Cubs on Opening Day. He recorded his first big league hit against reigning NL Cy Young winner Corbin Burnes, and he is the first Cubs player to reach base three times in his MLB debut since Nico Hoerner had a three-hit game in his debut in 2019.

Speaking of Hoerner, he swatted the first home run of the 2022 MLB season, a three-run blast against Burnes. Hoerner hit zero home runs in 324 plate appearances between the majors and minors from 2020-21. The game’s big blow was Ian Happ’s two-run double in the seventh inning. David Robertson closed out the win for the North Siders.

Burnes labored in his season debut. Last season he famously struck out a record 58 batters before issuing his first walk in 2021. So, naturally, he walked the very first batter he faced in 2021. Burnes was charged with three runs in five innings. In three starts against the Cubs last season, he allowed three runs in 20 innings. So already Chicago has had more success against him than last year.

Suzuki reached base three times and Happ had three hits, including two doubles. Kyle Hendricks allowed one run in 5 1/3 innings for the Cubs. He struck out seven and generated 14 swings and misses, two more than any game last year. The Cubs have won their season opener for the fourth time in the past five years.