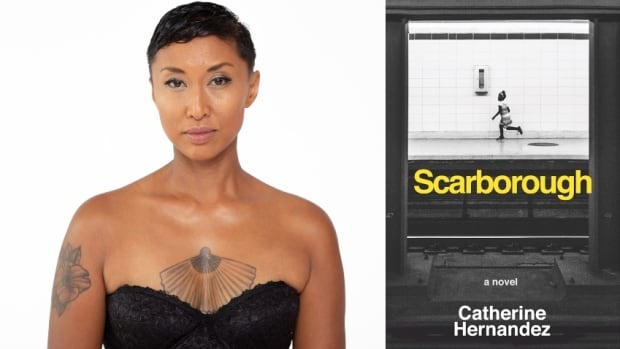 The great Canadian book debate has come to an end for another year. What should you read next? CBC Books has some ideas for you.

Scarborough centers on a low-income neighborhood in Scarborough, Ont., where residents lean on one another through difficult times. Shifting between several voices, the novel follows three young children: Laura, a neglected young girl raised by a racist father, Sylvie, a Mi’kmaq girl whose family struggles to find a permanent home, and Bing, a Filipino boy who loves makeup and performance. The children are surrounded by a community trying to navigate systems and biases that work against them.

Scarborough is Hernandez’s debut novel. The book was adapted into a film of the same name, which was nominated for 11 Canadian Screen Awards.

If you just finished Scarborough and are looking for a new read, check out these Canadian books that explore similar themes — including coming-of-age, community, systemic discrimination and youth perspective and identity.

The novel Brother takes us inside the lives of two brothers, the mixed-heritage sons of Trinidadian immigrants. Their father has disappeared and their mother works double or triple shifts so her boys might fulfill the elusive promise of their adopted home in the Toronto suburb of Scarborough.

Brother won 2017 Rogers Writers’ Trust Fiction Prize, the 2018 Toronto Book Award and the 2018 Ethel Wilson Fiction Prize. It was also longlisted for the 2017 Scotiabank Giller Prize and was championed on Canada Reads.

David Chariandy is a bestselling author. His other books include the novel Soucouyant and long essay I’ve Been Meaning to Tell You: A Letter to My Daughter. Chariandy teaches literature and creative writing at Simon Fraser University. He received the Windham-Campbell Prize from Yale University in 2019.

The Next Chapter11:11David Chariandy on his 2019 Canada Reads contender Brother

David Chariandy talks to Shelagh Rogers about his book brother, who is a 2019 Canada Reads contender. 11:11

This novel is told from the perspective of a five-year-old boy named Jack, who has never left the shed he lives in with his mother. Jack describes what life is like inside “room” — it’s a world that is warm and full of imagination thanks to Ma, but ultimately harrowing, sparse and traumatic for both of them. Jack gradually reveals that Ma has been held captive inside room for seven years, and she’s made a plan for their escape.

Room won the Rogers Writers’ Trust Fiction Prize and the Commonwealth Writers’ Prize (Canada and the Caribbean). He was also shortlisted for the Man Booker, Scotiabank Giller Prize and Governor General’s Literary Award. The screen adaptation, also written by Emma Donoghue, was nominated for four Academy Awards. Brie Larson took home the best actress Oscar for her portrayal of “Ma.”

Donoghue is a bestselling Irish-Canadian writer based in London, Ont. Her other novels include The Pull of the Stars, Akin, Giller-shortlisted The Wonder and Frog Music. She’s also written a middle-grade series about a family called The Lotterys.

The Next Chapter4:45Emma Donoghue answers the Proust Questionnaire

The author of “Room” on her favorite authors, her greatest fear and more. 4:45

Set in the small Ontario city of Sarnia in the 1980s, the 2004 novel follows the life of junior high student Peter Paddington, a sweet and awkward boy who is bullied for his weight. Peter is startled, as anyone would be, when his swollen “cherry” sized nipples start sharing their opinions with him out loud. Peter’s fantasies of being popular and finding a “boy friend” to share a locker with in ninth grade are often interrupted by his nipples’ advice, as well as the antics of his parents, two sisters and closeted Uncle Ed.

Fruit, Brian Francis’s debut novel, was a Canada Reads finalist. The book is being adapted into an animated series.

Francis is an Ontario-born writer and columnist for The Next Chapter on CBC Radio One. He is also the author of the novel Natural Order, the award-nominated YA novel Break in Case of Emergency and memoir-in-letters Missed Connections.

The Youth of God follows Nuur, a smart and gifted 17-year-old boy living in a Somali neighborhood in Toronto. Two adults, a radical Muslim imam and a dedicated teacher, are both trying to influence him and shape his future.

The Youth of God was longlisted for Canada Reads in 2020, and was a finalist for the Pius Adesanmi Memorial Award for Excellence in African writing.

Hassan Ghedi Santur is a Somali Canadian writer and journalist who has worked for CBC Radio, the New York Times and the Walrus. He is also the author of the novels Something Remains and the nonfiction book Maps of Exile.

Home Waltz is about a 15-year-old mixed-blood Nłeʔkepmx boy known as “Squito” Bob, trying to find his place in the world. Squito feels like an outcast as a half-white and half-Indigenous boy in a mostly-Indigneous, heavily-policed ​​community, and often drinks to oblivion to forget his woes. Home Waltz follows Squito and his friends over one big weekend, exploring friendship, music, sex and identity along the way.

Grisenthwaite is Nłeʔkepmx, a member of the Lytton First Nation who currently lives in Kingsville, Ont. His work has appeared in The Antigonish Review, Our Stories Literary Journal and Prism International. His story Splatter Pattern was longlisted for the 2021 CBC Short Story Prize.

In That Time I Loved You, teenage and adult residents of a small suburban neighborhood in Scarborough, Ont. take turns describing the aftermath of a series of shocking suicides in their community. These interconnected short stories explore a wide range of experiences — racism, homophobia, domestic and sexual abuse — revealing that hard truths can be hidden within a well-kept home.

That Time I Loved You won the 2019 Daunta Gleed Literary Award for short fiction. It was longlisted for Canada Reads.

Carrianne Leung is a writer and educator with a PHD in sociology and equity studies from the University of Toronto. Her debut novel was, The Wonderful Woo, was shortlisted for the Toronto Book Award in 2014.

The Next Chapter13:56Carrianne Leung on “That Time I Loved You”

Carrianne Leung on her collection of linked short stories, “That Time I Loved You,” which goes behind the closed doors of a neighborhood in 1970s Scarborough. 13:56

The YA novel Like Home tells the story of a teen named Chinelo, Nelo for short. Her best friend is Kate Tran, whose family owns a convenience store that’s become a staple in their Ginger East neighborhood. But things are changing on their street — upscale stores are popping up and, when the Tran’s store is vandalized, Nelo joins grassroots efforts to protect her community.

Louisa Onomé is a Nigerian Canadian living in Toronto. Like Home is her debut novel.

Frying Plantain follows Kara Davis through elementary school to her high school graduation, as she comes of age while being perennially caught between her Canadian nationality and Jamaican heritage. Over a series of 12 stories, Davis visits her great aunt in Jamaica, endures a cruel prank by close friends and deals with her stubborn grandparents.

Zalika Reid-Benta is a Toronto writer. She received an MFA in fiction from Columbia University and was the 2019 John Garder Fiction Fellow at the Breadloaf Writers’ Conference. She’s working on a fantasy novel, called River Mumma, to be published in 2023.

q10:59Souvankham Thammavongsa on her award-winning short story collection How to Pronounce Knife

Toronto writer and poet Souvankham Thammavongsa won the 2020 Scotiabank Giller Prize for her debut work of fiction, How to Pronounce Knife. The morning after her big win, Souvankham talked to Tom Power about the book, which was praised for its “achingly beautiful prose.” 10:59

How to Pronounce Knife is a collection of idiosyncratic and diverse stories. Capturing the daily lives of immigrants, Souvankham Thammavongsa writes about their hopes, disappointments, trauma and acts of defiance. From a young man painting nails in a salon, to a housewife learning English from soap-operas, How to Pronounce Knife navigate tragedy and humour.

How to Pronounce Knife won the 2020 Scotiabank Giller Prize. The short story collection is Thammavongsa’s first work of fiction.

Thammavongsa is a poet based in Toronto. Her stories have won an O. Henry Award and appeared in Harper’s, Granta, The Paris Review and NOON. She has published four books of poetry, including 2019’s Cluster.

Q34:02Miriam Toews on her new novel Fight Night and how it explores ‘the fight for one’s mental health’

Bestselling Canadian author Miriam Toews sat down with Tom Power to discuss her highly anticipated new novel, Fight Night, and what it says about family, resiliency and the fight for mental health. Fight Night is out now. 34:02

In fight night, nine-year-old Swiv lives in Toronto with her pregnant mother, who is raising Swiv while caring for her own elderly mother. When Swiv is expelled from school, Grandma gives Swiv the task of writing to her absent father about what life is like in the house during her mother’s final trimester. In turn, Swiv tells Grandma to write a letter to her unborn grandchild.

fight night was on the shortlist for the 2021 Scotiabank Giller Prize and the 2021 Atwood Gibson Writers’ Trust Fiction Prize.

Miriam Toews is the Toronto-based author of seven novels, including Women Talking, All My Puny Sorrows, A Complicated Kindness and The Flying Troutmans. Her 2018 novel, Women Talking, was a finalist for the 2018 Governor General’s Literary Award for fiction.